Bodycount Shooter Fails to Justify Its Own Existence 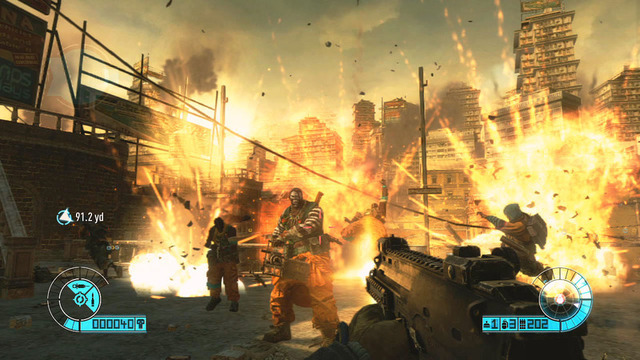 There is no context given to any of your actions in Bodycount.

You work for a group called Network, and you’re tasked with saving the world. You do this by traveling from ugly environment to ugly environment and then running from point A to point B while shooting everything you see. When you kill an enemy, multi-colored power-ups spring from the body, and they make sounds like a slot machine when you pick them up. Each level becomes littered with these colorful icons.

There is absolutely no cohesion to this Xbox 360 and PlayStation 3 game, released on Tuesday. None of the ideas come together to create an experience that feels unique or distinct from other, better games already available or coming soon. Every moment I spent with Bodycount felt like an obligation.

When you die, and the game’s inability to accurately convey how much damage you’re taking means you’ll die often, the screen says “ASSET EXPIRED.” Your character is completely faceless. You have nothing invested in the fights you’re in, and the ugly, repetitive environments and unsatisfying gunfights don’t give you a single reason to want to continue. I did not make it far in this game, because one day I will die, and I refuse to go out thinking I spent one second more than I had to playing Bodycount.

The enemies work for an organization called Target. They are bad. Therefore you must kill them in interesting ways and get combos that mean absolutely nothing. It’s like someone tried to copy Bulletstorm, got drunk, and then gave up. Many aspects of the game look like they were created using placeholder graphics that were meant to be replaced, until the executive decision was made not to hire artists.

You can hold the trigger button in an attempt to use iron sights, but the gun is off-center on the screen, making the aiming no easier than the normal running and gunning outside of the zoom effect. Also, you can’t move in this mode, you can only lean. If you hold the trigger button half down you can move, but since it’s easy to push too hard and the leaning mode is useless, you have to wonder why these control decisions were made. None of the controls can be re-mapped or adjusted.

I know I’m being harsh; the game had a troubled development cycle and it couldn’t have had much of a budget. Or, should I say, if there was money spent, you don’t see any evidence on the screen. Still, they’re selling this game for $60, and that’s almost criminal. It’s barely competent, and would be hard to like as a budget title, but as it stands it was pushed out the door in this condition and sold at the same price as a triple-A title. That is hard to forgive.

It’s depressing when a game completely fails to make the case for its own existence. There is no fun to be had here, no hook to grab players, and no justification for the premium pricing. This is a situation where the press needs to act as a rolled-up newspaper, smacking everyone involved with this game on the nose and yelling “NO!”