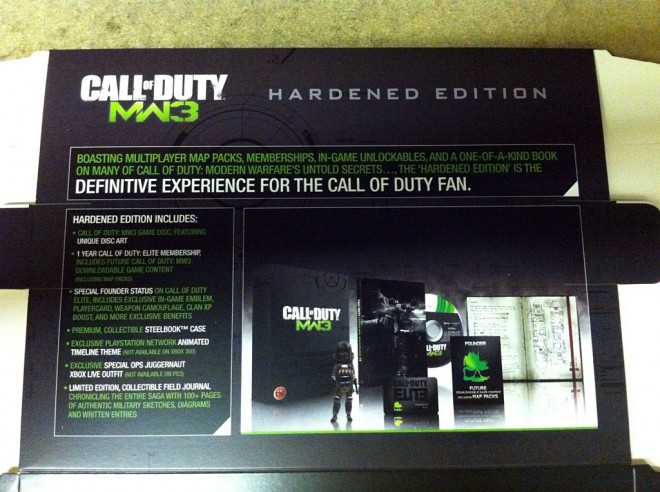 The premium “Hardened Edition” of upcoming shooter Call of Duty: Modern Warfare 3 will ship with a year of free membership to Call of Duty Elite, among other features, according to an anonymous source who provided a photo to Wired.com.

Activision will release the highly anticipated Modern Warfare 3, with new weapons based on input from real-life Delta Force operatives, on Nov. 8 for PC, Xbox 360, PlayStation 3, Wii and DS. The deluxe Hardened Edition package, which publisher Activision will unveil at its first Call of Duty XP convention this weekend in Los Angeles, will feature unique disc art, a collectible steel case and a 100-page “field journal” packed with Call of Duty sketches and diagrams.

Premium membership to Call of Duty Elite gives players access to a treasure trove of statistics and social networking options as well as free downloadable content, like extra maps.

The leaked photo appears to show a retail advertisement for a European version of the Hardened Edition box, so it’s possible the U.S. version would be different. However, previous limited-edition Call of Duty packages have been identical in the United States and Europe. The list of Hardened Edition extras in the photo that Wired.com received includes: