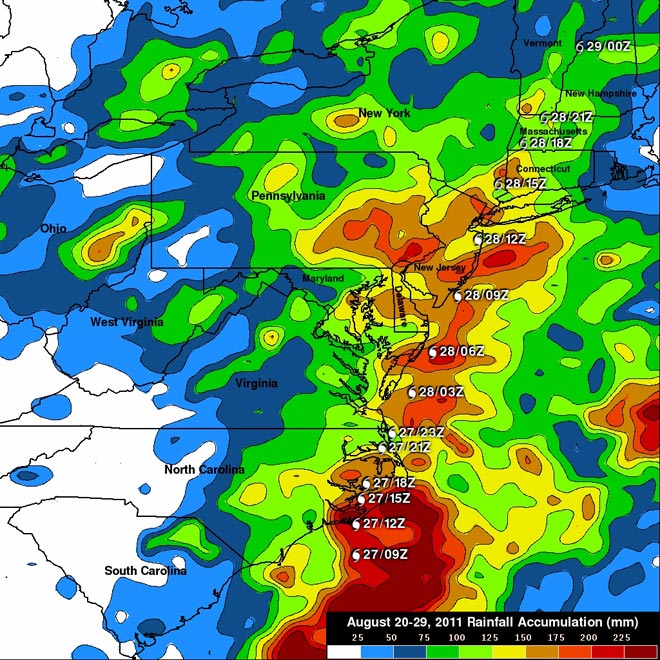 The map, created using data recorded by the Tropical Rainfall Measuring Mission (TRMM) satellite from Aug. 20-29, reveals rainfall in some bands of the now-dissipated 10-day-long storm exceeded 2 inches per hour.

“Hurricane Irene was dropping tremendous amounts of rainfall over the eastern United States during a part of this period,” said TRMM team member Hal Pierce of NASA’s Goddard Space Flight Center in a press release.

To gauge rainfall levels, the satellite relies on an instrument that measures microwave radiation. Flat water looks cold because of it doesn’t emit microwave radiation as readily, but round raindrops falling from clouds do and appear warm. By running calculations of the cold/warm contrast over oceans, TRMM can accurately assess rainfall totals.

Over land the situation is trickier. Soil, plants and other materials on the ground emit microwave radiation almost as efficiently as water droplets, providing poor contrast to detect rainfall. But ice crystals present at the tops of most rain-making clouds are different enough in microwave-detected temperatures to allow the satellite to infer rainfall intensity and levels. 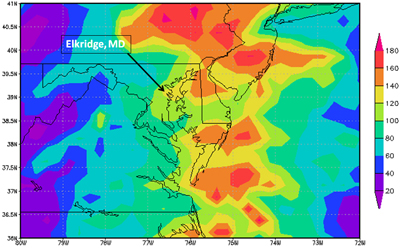 Some rainfall hotspots captured by TRMM include New Jersey, upstate New York and southern Vermont, where catastrophic flooding has left thousands of people without homes. The most rain from Irene — about 8.9 inches — fell in North Carolina, where storm runoff cut through highways and beaches. Uninsured damage estimates for the U.S. range between $7 and $10 billion.

Irene was the first named storm of the new hurricane season. The National Oceanic and Atmospheric Administration, however, is betting tropical storm Katia (below) — now barreling toward the Caribbean islands — will become the second some time today. Although it’s too soon to know if, when or where the new storm will make landfall, computer models depict the extreme weather system arriving near Bermuda in roughly a week. 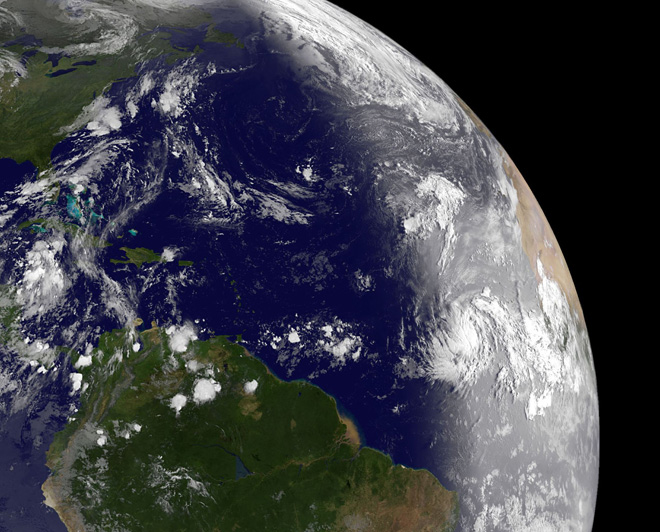