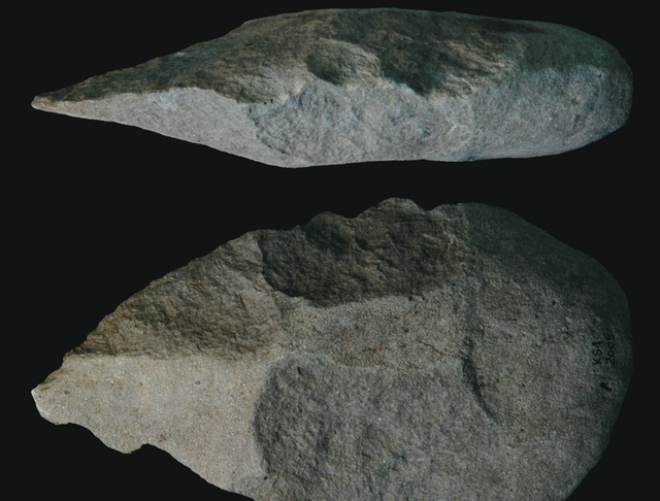 Given that chimps have demonstrated the ability to make and use tools in the wild, chances our that our human ancestors inherited some of that ability from the ancestor both humans and chimps have in common. But, starting with the australopithecines, our ancestors started making permanent tools from rocks, and investing increased effort into shaping. Oldowan tools were later used by the first members of the genus Homo, and were carried out of Africa during the global spread of Homo erectus.

By 1.4 million years ago, African Homo erectus was using the far more involved and sophisticated Acheulian tool technology, which later made its way out of Africa. But the transition between the two tool types has remained unclear. Now, scientists are reporting the first find where Oldowan and Acheulian tools have been found at the same site, one that’s old enough to indicate that Acheulian tools were available when Homo erectus first left Africa.

The site in question lies near Lake Turkana in Kenya, which was already famous for finds relevant to human origins, including the Turkana Boy Homo erectus skeleton, which dates from 1.5 million years ago. The slopes near the northwest shore of the lake contain an extensive sedimentary record that can be matched with others in the nearby area, including some that have been dated using radioactive decay. A few meters below the sediments that contained the tools lies a feature that has been dated to 1.9 million years ago; above them, a different feature sets a younger limit at 1.5 million years. That last figure is rather significant, given that there are no reliably dated Acheulian tools older than 1.4 million years.

Extrapolating based on the depth of the deposits between, the authors estimate that the tools are roughly between 1.72 and 1.81 million years old. That lets them start zeroing in on a more precise date based on reversals in the Earth’s magnetic field. This provides a firmer estimate: 1.76 million years, 350,000 years older than the previous site that had been dated so precisely. It also lines up with one of the earliest Homo erectus fossils, reinforcing the link between the two.

Since both toolmaking technologies were present in the same sediments, the site provides a clear indication that one set of techniques didn’t simply replace the others. Either the Acheulian tools were developed by people who continued to use their earlier techniques, or the Acheulian technology was imported without its displacing the native one. In either case, the site suggests a more gradual transition than previous evidence had indicated.

The age of these tools also suggests that displacement was very, very gradual. It hadn’t spread far enough to be in use by the first members of Homo erectus that left Africa at about the same time, and we don’t have reliable dates on Acheulian tools in the Middle East that are much older than a million years. So, even if our ancestors were avid tool users, they weren’t all that fond of adopting new technology.