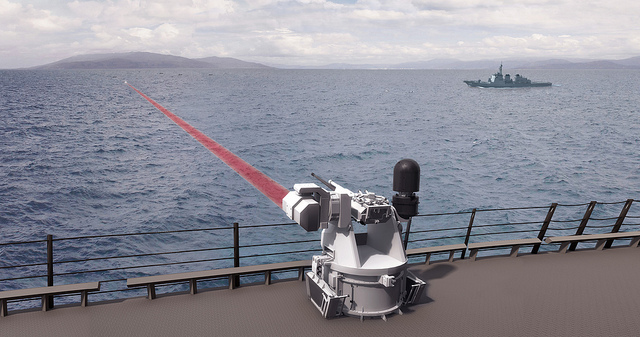 Now we know what the Navy plans to do with its experimental hybrid of laser cannon and machine gun: zap pirate ships.

Late last month, two defense giants, Boeing and BAE Systems, announced that they would team up on a $2.8 million Navy contract for a prototype version of BAE’s Mk-38 25-mm. machine gun with a little upgrade: a death ray. As the companies excitedly explained, the new gun would protect surface ships from pretty much everything, from enemy boats to small drones.

What the companies weren’t letting on was that they had already tested the machine-laser-gun a month before the announcement. And in tests — which BAE, hardly an uninterested party, claims were successful — the new Mk-38 took on its most likely adversary: pirate skiffs.

In late June, the waters of the Choctawatchee Bay near Florida’s Elgin Air Force Base subbed for the Gulf of Aden as ersatz pirate ships “swarmed” amidst dense “civilian” maritime traffic to harass a mock Navy “platform” armed with the laser gun. The nu-mark Mk-38 used its lasers to fix the enemy targets for bursts of machine gun fire, before switching up to laser mode to “defeat the targets” with a “high beam-quality 10 kilowatt laser,” BAE spokeswoman Stephanie Bissell Serkhoshian told Danger Room.

That might be the most practical use for the new weapon. Pirate attacks near Yemen and Somalia employ motorboats, often working in “swarm” teams, small enough to be neutralized by 10 kilowatts worth of energy, which the Navy considers about an order of magnitude below what’s typically militarily useful. They also get close enough to U.S. ships and merchant vessels to let off small arms fire at the crews, putting them in range of either the machine-gun bursts or the laser target.

Serkhoshian pointed to an April pirate attempt on the U.S.S. Ashland as a template for the test. On April 10, in the Gulf of Aden, a green pirate skiff snuck up on the amphibious dock landing ship, getting close enough for its six-man crew to let off small arms fire at the Ashland. The U.S. sailors retaliated with their laser-free Mk-38, setting the skiff aflame and forcing the pirates to abandon ship.

With a laser attached, the idea is to blast multiple skiffs more efficiently, as a laser of similar kilowatt expenditure can burn through an outboard motor in about a minute, as the Office of Naval Research demonstrated with a different laser system in the California seas that same month. And it’s also useful for locking onto targets for the conventional machine gun to shoot. It’s certainly a departure from BAE’s last anti-piracy contribution:  a crystalline Neodymium Yttrium Aluminium Garnet laser used as a blinding floodlight.

Still, the test had some serious training wheels attached. The laser version of the Mk-38 wasn’t affixed to a ship taken out to water and maneuvering against the enemy skiffs; it was fired on land, Serkhoshian confirms. It’s much easier to fire from a static position, and Navy ships like the Ashland probably won’t have that luxury. The Office of Naval Research’s April laser test was a big deal precisely because it represented the first time a Navy laser fired from a ship speeding through choppy waters blasted away a moving target. Additionally, BAE won’t disclose how far away the “pirate skiffs” were when the Mk-38 took them out.

It’ll be years before the nu-mark Mk-38 gets out of the development stage and aboard a ship. But the eternal struggle between pirates and lasers just intensified.