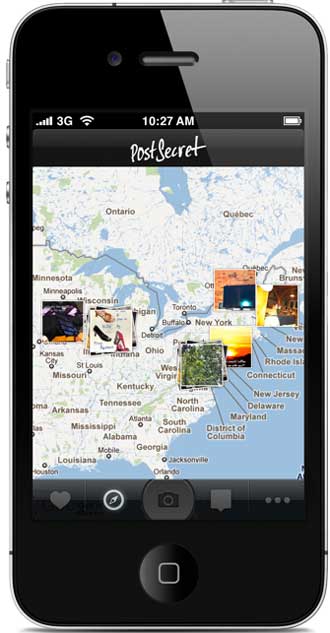 The new PostSecret iPhone app will allow users to find secrets posted near their current locations.

PostSecret started with people mailing postcards spilling their deepest, darkest, most private thoughts to founder Frank Warren, who published the most intriguing ones on his blog. Now that intimate and anonymous exchange is going mobile with an app that could fundamentally change the crowd-powered art project.

The PostSecret app, scheduled to be released Sunday, will let users take photos with their phones, add 140 characters worth of “secret” and upload everything anonymously to the PostSecret mobile community. Users of the app can then look through the intimate messages and “heart” them, comment on them or add their own secret posts.

It’s a big leap for a successful crowdsourced website that’s always been dependent on the postal service.

Because the app is mobile, users will be able to tag the locations of their secrets. They won’t have to say exactly where they are, but can pick a nearby location to tag the submission with. The intentionally simple app will also feature Instagram-esque options like photo filters and the ability to make the post less-than-secret by feeding it to Facebook, Twitter or to an e-mail address.

At a time when we often don’t know if our connection to our gadgets is pulling us away from actual human interaction or revealing too much about who we are and where we go, creating an app that collects our most intimate secrets and keeps us anonymous — while simultaneously making us feel closer — could prove to be a welcome relief.

Or it could become a secret-spilling powder keg. Warren is well aware that providing too open of a forum could lead to disasters, but said he hopes users will decide what the best use of the app is.

“There have been apps in the past or websites that have been very popular on college campuses, where it got kind of out control and people were using it to bully or say slanderous things,” Warren said. “We want to make sure the way the app is used is in the best interest of the community.”

To that end, users will be able to flag inappropriate content if they think a post is bullying or damaging. To protect themselves, users, who post anonymously (the app doesn’t require an e-mail address), have the option to remove posts they regret. They can also set their phones to “forget” things as soon as they’re posted, so there’s no evidence on their devices.

‘Maybe there’s a way we could identify a certain college that might be struggling with abuse issues or people thinking about suicide.’

Ultimately, Warren said he hopes the app will serve a greater purpose than just allowing users to confess their sins or share their sexploits.

“Right now I’m looking at a stack of over a half-million postcards — it’s a huge singular resource, but it’s kind of stagnant,” Warren said. “If we could have that information be dynamic like it’ll be in the app, it allows us to think further down the road. Like the way Google can identify where flu is breaking out based upon searches — maybe there’s a way we could identify a certain college that might be struggling with abuse issues or people thinking about suicide, and we could alert the school to make resources available in real time.”

That’s a big ambition. But then again, so was asking total strangers to mail you the things they’ve never told anyone.

The PostSecret app will be available for iPhone (an Android version is coming soon) on Sunday for $2.