Reflecting the Stars Splashes Constellations on the Hudson 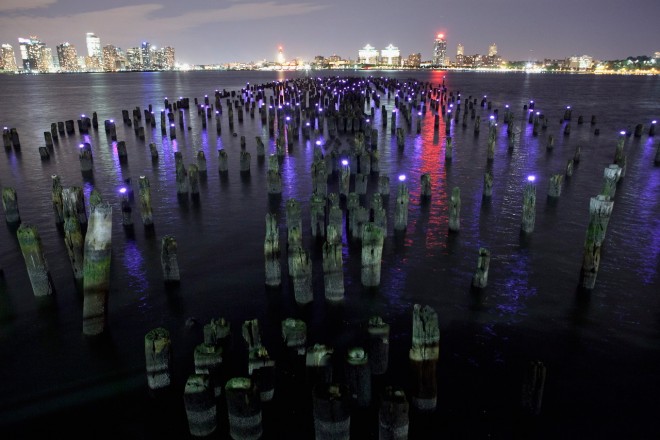 The Reflecting the Stars project returns a bit of the night sky's wonder to New York City. (Click to enlarge.)

New York City’s light pollution leaves the stars invisible to the unassisted eye, making the city feel “like living in a low-ceilinged room,” according to artist Jon Morris.

In response, the Brooklyn transplant created Reflecting the Stars, an art installation that re-creates constellations on the surface of the Hudson River. The display, unveiled earlier this week after a delay caused by Hurricane Irene, brings the natural wonder of the night sky down to sea level off Pier 49.

“I grew up in Kentucky, and I’d go lay out on the pier and look at the stars,” Morris told Wired.com. “You think about what happens when you can’t see stars. Are we losing our sense of humility?”

Off the west side of Manhattan, near 11th Street, Morris and his collaborators have installed 201 lights on the stray pylons of an abandoned pier. The lights are activated by a nearby plaque, which visitors can operate to evoke the pattern of a real constellation on the water’s surface. As the tide rises and falls, the lights will take on different patterns. As Morris says, “Nature consumes the installation.”

The project began as a guerilla art installation. “I was thinking I’d just grab some lights, jump in, and attach them,” Morris said, but he thought it was too beautiful a concept to install with haste.

The idea went beyond haphazard wires and waterproof lights. “The lights needed to disappear and not disrupt the beauty of the wood posts,” he said.

Morris began with no knowledge of electronics, but fulfilling his vision for Reflecting the Stars meant adopting some major science. He worked with industrial designer Andy Baker to design the lights; when the question of compensation came up, Baker just asked that Morris take him to his first Burning Man festival in Nevada.

Morris and Baker tried every way to make the lights work, but they kept running into problems with the solar charging sustaining bulb life. Jon reached out to a friend of a friend from his Indonesian dance ensemble, and soon Google software engineer Adam Berenzweig came on board.

Berenzwieg had to realign his expertise. Rather than working with servers where memory is measured in terabytes, the lights for which he was writing software held around 1 kB of data. “I would spend an hour debugging and realize the problem was that I would overwhelm it with debugging code,” Berenzwieg said.

The problem was power consumption. The lights had to conserve power during the day and run at a steady power level at night, all while self-monitoring battery life. “I designed a radio protocol to run every five seconds,” pacing the power output, Berenzwieg said.

Once they finalized the light setup — each unit consists of eight LEDs with four white and four blue lights, a small battery, and an integrated solar panel — they had to be sure the lights were ready to go. “We covered it with a marine sealant,” Morris said. “We could scrape at it and smash it, but once we set them, we couldn’t fix them if we wanted.”

‘Blue does crazy things with your eye along the visible spectrum.’

The last days of testing were conducted on the roof of Morris’ apartment building. They decided to go with the blue lights. “Blue does crazy things with your eye along the visible spectrum,” he said. More importantly, the blue light distinguishes the constellations from the New Jersey skyline.

Once Berenzwieg and Morris finalized the design, the lights were set in pipe casings that would rust and decay with the wood upon which they were set.

When the lights were ready for mounting, Morris and five other eager volunteers paddled out to the jagged pylons in canoes, donned wetsuits and lifejackets, and entered the Hudson’s opaque water. “Everyone wanted to come and install them,” Morris said. “‘They were saying, ‘Enough of this coming over to solder diodes. We want to get in the water.’”

Morris and his installers took four and a half hours to set up the lights. They arrived at high tide and rode the flow from the highest pylons down to the lowest, affixing each light with a zip tie, legs akimbo, clinging to the barnacle-encrusted wood.

At Reflecting the Stars‘ unveiling, after speakers discussed light pollution and the importance of humility in the face of stars, a woman whose mother had recently died came to spread her ashes across the lights. She spoke about how her mother would be moving on to a new galaxy this way.

The lights will be on display as long as the LEDs last. 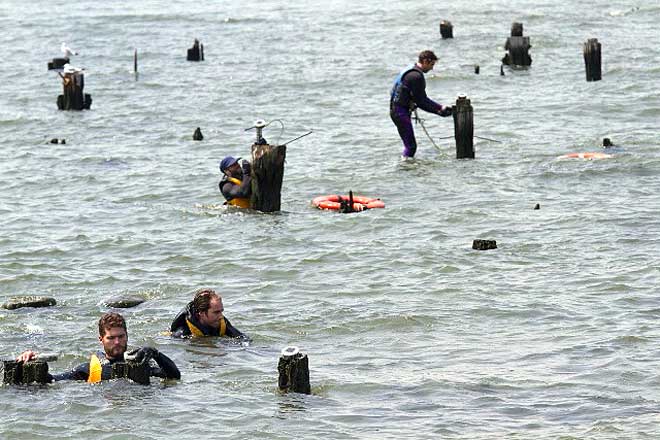 Wetsuits and life jackets make installation of Reflecting the Stars in the Hudson River more manageable.

Read 3130 times
Published in News Technologique-Tech News
More in this category: « Apple Investigators Allegedly Posed as Cops in iPhone Prototype Hunt How the Starz-Netflix Divorce Will Remake Video »
back to top