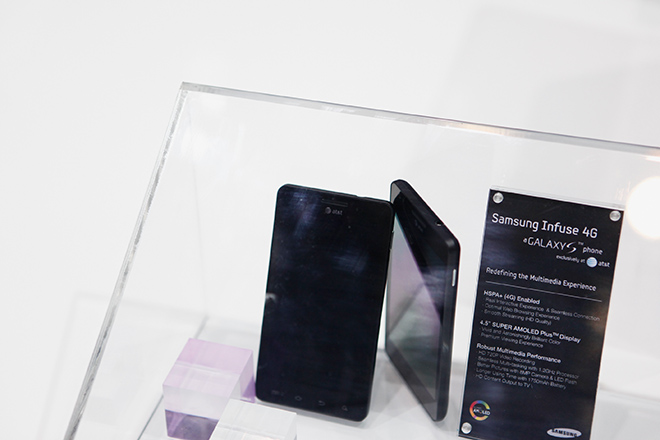 The Android-running Samsung Infuse wowed us with its 4.5-inch display at CES. Photo: Jon Snyder/Wired.com

For much of the mobile world, the emphasis is smaller, slimmer and lighter. But when it comes to smartphones, it seems bigger is better.

A growing number of smartphone manufacturers are trying to distinguish themselves from the competition by giving their phones ever more spacious screens. It was definitely a trend at the big IFA consumer electronics show in Berlin, one we first spotted at CES.

The Samsung Galaxy S II LTE phone, Samsung Galaxy Note and HTC’s Windows Phone 7–running Titan all featured relatively ginormous 4.5-inch to 5.5-inch displays. The burrito-shaped Sony Tablet P follows that trend times two: It features a pair of 5.5-inch displays that open like a clamshell. Even Apple appears to be getting in on the act: The next iPhone reportedly sports a larger display.

At CES earlier this year we saw a number of large-screened beauties take the stage, including the 4.5-inch Samsung Infuse. Some 4.3-inchers also have appeared, like the Motorola Photon 4G and upcoming Motorola Droid Bionic.

And last year, the Dell Streak blurred the line between smartphone and tablet with its 5-inch screen.

“The explosion in web and video content available for smartphones has caused consumers to rethink their phones’ sizes,” Ross Rubin, NPD’s executive director of industry analysis, said in a statement. “Larger displays offer a richer media experience, as well as a roomier surface for onscreen keyboards.”

Rubin told Wired.com the Samsung Infuse has done relatively well at AT&T. As long as the increase in a device’s screen size doesn’t come with an overall increase in the size of the phone, we’ll continue to see more people adopt phones with larger displays.

And that raises an interesting point: Even if you need a screen that big, can you still call it a smartphone? No, said Ken Dulaney, an analyst at Gartner.

“We believe that a smartphone ends and a tablet begins at 4.2 inches diagonal,” Dulaney said. “A 4.5-inch device is a small tablet, in my opinion.”

A better definition might be how conveniently you can carry something that big.

“The question becomes what is the maximum screen size one can put in their pocket, which is the limiting factor,” Rubin said. “The Samsung Galaxy Note has a 5.3-inch screen. Samsung claims that’s the largest that can be accommodated in a pocket. I think that’s a tablet, not a phone.”

Whatever you call it, many manufacturers believe a larger display is a great way to distinguish a product from the competition because, let’s face it — a lot of smartphones look alike.

“Today’s smartphones are pretty difficult to distinguish when it comes to the customer actually looking at them in stores. Increasing the screen is a clear example of manufacturers trying to differentiate rather than following the established product classes,” Geoff Blaber, an analyst at CCS Insight, told MacWorld.

The screens aren’t only getting bigger, they’re getting sharper. Samsung has been developing miniature full-HD screens with its Super AMOLED Plus technology. We’ll probably see displays 5 inches or bigger with 1280 × 720 resolution by the end of the year.

The bigger screens reflect how a lot of people use their phones, which aren’t so much phones as media-consumption devices. People are more likely to use their phones to watch movies, stream videos and play games during the daily commute, that boring staff meeting or any other time the boredom is otherwise unbearable.

According to Pew Internet, 72 percent of smartphone owners turn to their device for entertainment when they are bored. Sixty-four percent use their phone for gaming, and 54 percent use it to watch video. Google’s study with research firm Ipsos OTX found similar numbers: 48 percent of us use our smartphones to watch videos.

All of these activities only improve with a larger screen. And a bigger screen means a bigger gadget, which means there’s room for a bigger keyboard. That’s good, too, because Pew found almost all of us use our smartphones for text messaging, and more than 75 percent of us use them to compose e-mail.

But a larger screen does pose some problems when, for example, making calls. Holding a device with a screen approaching 6 inches can look and feel a bit awkward.

“Assuming you have enough room in your purse, you could use the device only for surfing and then use a Bluetooth headset for calling,” Dulaney said.

True, but a larger display can suck up more battery life and will be more susceptible to cracking or breaking. It could also problematic, as we stream more content to our mobile device using services like HBO Go or Netflix, that almost every carrier has killed the option for unlimited data plans. Even with portable devices that make video consumption pleasant on the go, and the network connectivity to actually support it, you have to watch your data usage or literally pay for the consequences.

Rubin doesn’t believe that’s a big issue at the moment. Wi-Fi is still an option, especially if you’re somewhere like a coffee shop, and overall, the lower price point of capped data plans allows more consumers to enter the market.

Whether you consider them mammoth-screen smartphones or pocket-size tablets, we’re going to be seeing a lot more of them over the next few years.