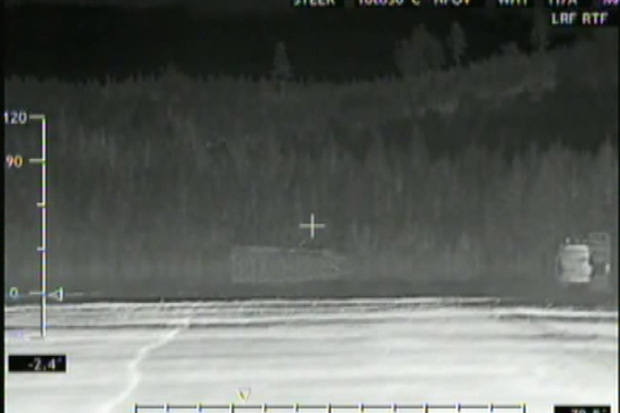 British defense company BAE Systems has developed an “invisibility cloak” that can effectively hide vehicles from view in the infra-red spectrum.

The patented system — called Adaptiv — uses a matrix of hexagonal “pixels” that can change their temperature very rapidly. On-board cameras sweep the area to pick up the background scenery and display that infra-red signature on the vehicle.

This allows even moving tanks to be effectively invisible in the infra-red spectrum, or mimic other objects. “The tank skin essentially becomes a big infra red TV,” BAE Head of External Communications Mike Sweeney told Wired.co.uk. “You can display anything you want on it — including a cow — while the rest of the vehicle blends into the background.”

The current system works in the infra-red spectrum, which could hide vehicles from heat-seeking missiles, drones and heat-sensitive goggles. However, BAE Systems engineers have combined the pixels with other technologies to provide camouflage in other parts of the electro-magnetic spectrum.

“Earlier attempts at similar cloaking devices have hit problems because of cost, excessive power requirements or because they were insufficiently robust,” explained project manager Peder Sjölund. ”Our panels can be made so strong that they provide useful armor protection and consume relatively low levels of electricity, especially when the vehicle is at rest in ’stealth [reconnaissance]‘ mode and generator output is low.”

The pixel panels can also be made at different sizes to achieve practical invisibility at greater ranges. The resolution needed to hide a CV90 tank at close range is high, but disguising a building or warship from a great distance can be achieved with a lower resolution, and larger panels.

In tests earlier this summer, BAE systems has been able to make one side of a Swedish CV90 tank “effectively invisible” in infra-red mode, and will be showing this off at the UK Defence and Security Equipment International exhibition later this month (Wired.co.uk will be attending). Over the next few years, the company hopes to see similar success in other parts of the electro-magnetic spectrum.