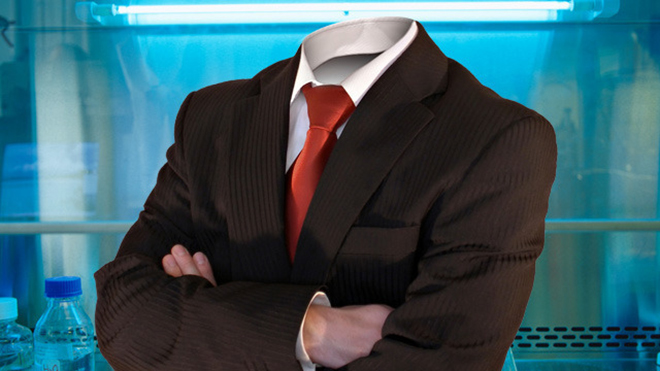 When you shine light on a substance, part of the light is reflected, part is transmitted and part is absorbed. If you choose the color of light and the substance sensibly, you can arrange things so that all the light is absorbed. Nothing special about that, right? OK, but what if you could shine a second light on the substance and make it transparent for the first light field? That would be a bit strange, wouldn’t it?

Electromagnetically induced transparency (EIT), as it is called, is a bizarre phenomenon all by itself. But there is nothing like taking the bizarre and making it even more so. A group of researchers has shown that, under the right conditions, this second light field doesn’t have to hit the substance to make EIT work—it only has to have the potential to be there. My response: OMFG, that is too cool to be true.

Warning: here there be quantum mechanics

EIT occurs due to an interaction between two light fields that is mediated via an atom. Atoms absorb light in discrete chunks. Normally, an atom would be sitting in a single ground state, but some atoms have two states that are at about the same energy and are about as stable. In this case, we can think of the atom as having two ground states. Through careful preparation, we can generate a group of these atoms so that they are all in just one of the two ground states. If I turn on a light field (called the probe light) with the right color, it will be absorbed by the atoms, putting them into an excited state.

A light field, called the control light field, that is tuned to match the energy required to move the atom from the other ground state to an excited state, however, will not be absorbed; there are no atoms in that ground state to act as an absorber. But the presence of the control light still sets the electrons around the atom in motion. Provided this motion remains coherent, it changes the energy levels of the atoms slightly. More specifically, the excited state splits into two excited states: one at a slightly higher energy, and one at a slightly lower frequency.

EIT without any control

Not so, according to results published in Science. What we have overlooked is that, when atoms absorb and emit light, they do so from what are called modes. And, because photons are bosons, they like to get together. What this means is that if a mode has a photon in it already, an atom is more likely to emit into the mode of that photon in preference to all the others. Normally, we don’t observe this because atoms are surrounded by empty space—there are a near infinite number of modes and none of them have photons in them.

But we can change that. By putting the atoms between two mirrors, we create an optical cavity. This cavity severely restricts the number of modes available to the atom. Combine that with the fact that the atom is most likely to emit a photon with a particular energy, and it will find that it has just one mode available to it.

How do modes relate to EIT? To explain, let’s jump back to the experiment. The researchers put their cloud of atoms between two very highly reflective mirrors and prodded them until they were all in the first ground state. The probe light field is shone through the sample from the side—this light field doesn’t go anywhere near the mirrors, but it does pass through the atoms. That light is absorbed, and all seems to be lost.

But a few don’t. These atoms emit photons at the frequency of the control light field. And, thanks to the cavity, these few photons pass back and forth through those atoms a large number of times, making the atoms respond as if it were in a much stronger light field.* As with the normal EIT, once this field is established, the excited state energy level splits, and the cloud of atoms becomes transparent to the probe light. Even though we’ve never exposed the sample to the control light, it ends up behaving as if it were present.

That is pretty cool. But I suspect the pragmatists among you will be asking, “Where’s the application?” To be honest, I doubt if this will ever be directly applied. EIT has the potential to be very useful in terms of light being used to switch light—think optical computers. But no one really wants a cloud of atoms and optical cavities and all that sort of stuff hanging around in their computers: if you think dust is a problem now, imagine getting dust in this system.

The glimmer of utility on the horizon are things called quantum dots. These are little packages of material that behave like artificial atoms. With the right physical structure, EIT should be possible with quantum dots. These could then be combined with integrated optical devices to create optical switches, without needing the vacuum and vast array of instruments. Unfortunately, even with this development, switching times will likely be slower than electronic devices, and individual gates will be much larger than current electronic gates. So, in the end, this is for the pure joy of discovery.

* This is technically incorrect. The light field in the cavity is actually that strong, but if the photons were not bouncing back and forth in a cavity, the light field would be very weak, and that is the comparison I want to make.

Read 2938 times
Published in News Technologique-Tech News
More in this category: « The Spy Who Tweeted Me: Intelligence Community Wants to Monitor Social Media Hands-On With the Droid Bionic, Verizon's 4G Screamer »
back to top