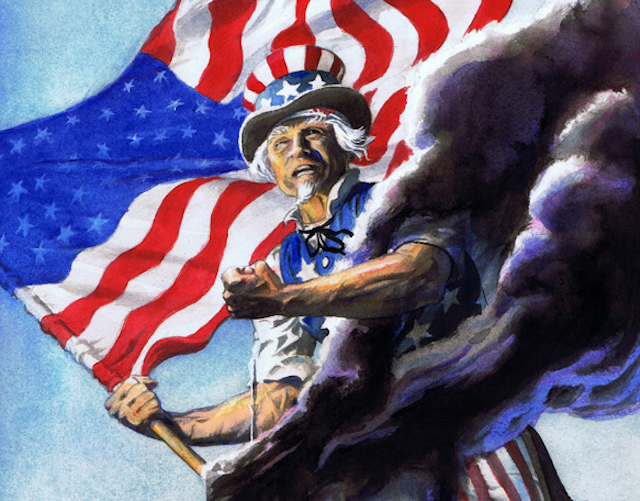 It’s enough to make you void your Comixology pullbox. Rick Veitch, a legend in the comic book industry, published The Big Lieon Wednesday, a sleazy 9/11 Truther screed in sequential-art form. Spoiler alert: pseudo-scientific hysteria married to paranoia about How Bush Knew isn’t any cuter when told by cartoon figures.

The Big Lie in a nutshell: ace physicist travels back in time from 2011 to September 11, 2001 to save her husband, who works for a risk-management firm in the World Trade Center. Armed with an iPad loaded with videos of the planes hitting the Towers and Googled stats on how many Iraqi civilians were soon to die from Bush’s imminent invasion of Iraq — let’s assume she pre-downloaded the data before stepping into her time machine — she has only an hour to convince her husband and his skeptical colleagues to evacuate.

Unsurprisingly, they’re skeptical, and that’s how the narrative develops. Like one of those Jack Chick evangelical tracts about how you’re going to burn in Hell, the characters’ reluctance to accept a bevy of conspiracy theories is ultimately rewarded with their fiery, painful deaths. Message: if only you would listen to Veitch’s Cassandra, you would spare yourself the agony of not knowing the Truth about 9/11. After all, she’s a physicist!

And Veitch doesn’t stop at one conspiracy. They build in their scope and scale. First it’s about Norad unexpectedly preoccupying U.S. air defenses with frivolous training exercises. Then it’s about how the neocons in the Bush administration are looking for an excuse to invade Iraq. (“I’ve heard more than one of these nut-jobs say what the U.S. needs is a ‘New Pearl Harbor,’” says a character who informs us he voted for Reagan.) Finally, the skeptical husband, an engineer who did his thesis on the World Trade Center, dismisses his future-wife by assuring her that “the only way to bring down these structures down is with explosives.” You see where this is going.

Sigh. Yes, planes loaded with jet fuel and used as missiles can — and did — destroy the World Trade Center. Read the authoritative Popular Mechanics story about the physics of 9/11 if your mind is open to persuasion. Bush and company indeed wanted to take down Saddam Hussein from the start of his administration and they cynically tied Saddam to 9/11 absent evidence. But sorry: there is no evidence they planned an invasion before 9/11; no evidence that they knew about 9/11 and let it happen; and no evidence at all they brought the Towers down.

Yet all that is wiped away in the scene’s final panel, where three thermite grenades are visible on a supporting beam inside the Towers — to the horror of a former skeptic — and Uncle Sam himself vouches for the truth of the story. “Folks fall so hard for the shuck-and-jive they never hear the wake up call when it finally arrives,” Sam says. This makes Frank Miller’s forthcoming Holy Terror seem calm and reasonable.

Veitch implicitly gives up the game — as Truthers tend to — when he has his Cassandra say, “Look at what was left out of the [9/11] Commission’s report,” the last recourse of those who believe the government covered up its role in the “conspiracy.” The horrible truth is that al-Qaida attacked the U.S. on 9/11.

For comic fans tethered to a sense of reality, Veitch’s descent into Trutherism is a huge disappointment. A star of alternative comics in the 80s, Veitch wrote some classic Swamp Thing stories for D.C. and illustrated a hugely important scene in Alan Moore’s seminal Miracleman. His comic Brat Pack is the best — and most disturbing — treatise on the exploitation of children implicit in the superhero-sidekick genre. It also sucks that the venerable publishing house Image Comics — which gave us Spawn, The Walking Dead, Youngblood and more — saw fit to release Veitch’s hysteria, selling it as a “riveting tale of 9/11.”

In an interview published Wednesday with entertainment site Death + Taxes, Veitch says he’s just warming up his cartoon conspiracy machine. “Right now we are discussing a couple more 9/11 themed issues that focus on elements that were too complex to cover in our first issue,” Veitch said. We’d like to do one that illustrates the money trail preceding and following the attacks. And we’d like to shine a much needed light on the Patriot Act, which had been on the Neo-Con drawing board for a decade until it was passed in response to 9/11.”

That’s not true, either, by the way. It would appear the true controlled demolition concerns what Rick Veitch has done to his brain.