How Special Ops Copied al-Qaida to Kill It 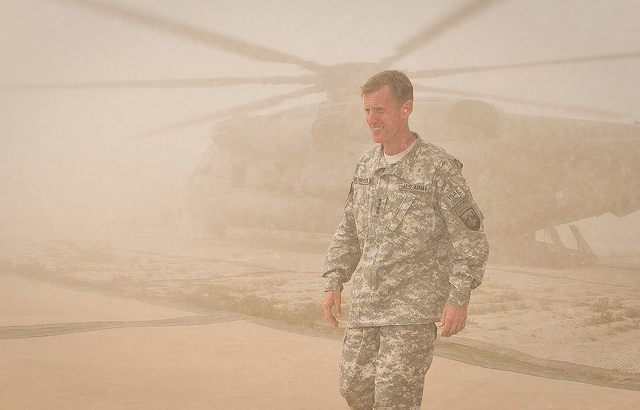 One of the greatest ironies of the 9/11 Era: while politicians, generals and journalists lined up to denounce al-Qaida as a brutal band of fanatics, one commander thought its organizational structure was kind of brilliant. He set to work rebuilding an obscure military entity into a lethal, agile, secretive and highly networked command — essentially, the U.S.’ very own al-Qaida. It became the most potent weapon the U.S. has against another terrorist attack.

That was the work of Stanley McChrystal. McChrystal is best known as the general who lost his command in Afghanistan after his staff shit-talked the Obama administration to Rolling Stone. Inescapable as that public profile may be, it doesn’t begin to capture the impact he made on the military. McChrystal’s fingerprints are all over the Joint Special Operations Command, the elite force that eventually killed Osama bin Laden. As the war on terrorism evolves into a series of global shadow wars, JSOC and its partners are the ones who wage it.

These days, McChrystal travels around the country to talk about his leadership style. His insights reveal a lot about how the JSOC became the Obama team’s go-to counterterrorism group. “In bitter, bloody fights in both Afghanistan and Iraq,” McChrystal has written, “it became clear to me and to many others that to defeat a networked enemy we had to become a network ourselves.”

McChrystal’s career also reveals a second irony: at the moment of his greatest ascension, to overall command in Afghanistan, McChrystal couldn’t take his own advice.

McChrystal declined to speak for this article. He’s working on a book, due out in 2012, that will probably shed some light on his tenure at JSOC. This piece is drawn from his speeches, interviews I’ve conducted over the years with special operations and intelligence veterans — usually off the record — as well as two insightful new books: Counterstrike by Thom Shanker and Eric Schmitt and Top Secret America by Dana Priest and William Arkin.