How the U.S. Learned the Wrong Health Lessons From 9/11 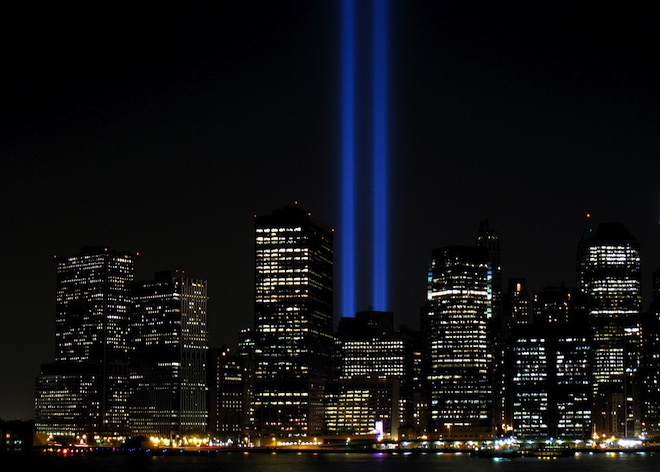 In the fall of 2011, the United States was confronted by two major public health challenges: the anthrax mailings and threat of a biological attack, and the subtler but ultimately more harmful plume of toxic dust that that rose from Ground Zero. The country was prepared for neither.

In the months and years that followed, bioterror proved to be the easier threat to confront, or at least to spend money on. The plume’s damage was harder to address, not least because government officials prematurely insisted on its safety. In both cases, one theme is universal: The wrong decisions were made, and lessons have been incompletely learned.

“I keep getting asked: Are we safer today than on 9/11?” says Laurie Garrett, the Pulitzer Prize-winning author of I Heard the Sirens Scream, a new book on 9/11 and its public health aftermath. “My answer is that we’ve spent an enormous amount of money, but I’m not at all convinced that the expenses have made us safer.”

Wired.com talked to Garrett about biodefense, the Ground Zero plume and what can be learned.

Wired.com: What is the big, takeaway lesson?

Garrett: There used to be this big debate regarding our national defense: Can the Pentagon fight a two-front war? Back then, it was always couched in terms of whether our military forces could be stretched so thinly. I would ask the same of our public health forces, our first responder forces, our medical forces — and I would say that the answer is no.

What we see, when you look at the lessons of 9/11, is that these people were burning candles at both ends. They were thoroughly exhausted. We demanded of our public health personnel a scale of performance that lasted for weeks. And one of the things that was really startling for me in the research to I Heard the Sirens Scream was how extremely strapped our public health people in New York City and Washington, DC were before the attack.

Afterwards, our health departments, our forensics departments, were all on full alert. They didn’t go off alert until well after Thanksgiving. Many were essentially running on fumes. I think they would say that a lot of decision-making suffered out of exhaustion.

I also spent a lot of time looking at health departments that weren’t targeted, but still went on full alert and stayed there for weeks. And they were so strapped by all the hoaxes, all the phony anthrax letters, all the honest, scared people who thought they were sick. Every one of those reports had to go to a lab.

Wired.com: So in the immediate aftermath, we were shorthanded. But the Bush administration soon established a biodefense program. Did it take the right form?

Garrett: What we found out after 9/11, after the anthrax mailings, and what resonated again with Katrina and every major threat we’ve faced, is that it all comes down to human beings.

Both private and public investors are often are often taken with high-tech answers. They love to invest in sensing devices and diagnostics and vaccines, in robotic bomb searchers, in all these devices that can sense explosives or anthrax in the air. A hell of a lot of money went into both Department of Defense spending, Health and Human Services spending. Everybody was spending billions of dollars, basically on technology, and technology is only as good as the personnel you have. You need a well-trained, well-paid, substantial infrastructure to use the technology and interpret what the technology is saying to them. You can’t take somebody who is paid $15 and hour and has a job description filed a couple notches above janitor and think that this individual can be held responsible for stopping al-Qaida.

Wired.com: Is al-Qaida even the right threat to be worried about? Don’t we have more to fear from a natural pandemic?

Garrett: Before 9/11, old-guard bioterror experts used the phrase dual-use to refer to difficulties in surveillance and verification: The same place that made pharmaceuticals could make biological weapons. But now the phrase gets used differently. People talk about bang for their buck. They say, “This expenditure is good for everyday health as well as this terrible thing that may happen one day.”

Dual-use now tends to justify stockpiling vaccines and purchasing technology. But I would say the appropriate use of the phrase is that the people you will rely on — to protect Americans, to solve great biological mysteries, to determine the appropriate responses — are the same people you rely on every single day to make sure the water coming from your tap is safe to drink, that the air around your building is safe to breathe, that the food you buy at your grocery store is safe from salmonella.

I keep getting asked: Are we safer today than on 9/11? My answer is that we’ve spent an enormous amount of money, but I’m not at all convinced that the expenses have made us safer. And on the public health side in particular, I’m sure the majority of expenditures can be characterized as a complete or borderline waste of funds.

‘The majority of expenditures can be characterized as a complete or borderline waste of funds.’

Wired.com: Give me an example.

Garrett: One of the major thrusts of the response to anthrax was responding to smallpox. We spent a couple billion dollars on vaccines, on bifurcated needles, on testing, on every imaginable aspect of new product development. This constituted a huge deployment at the National Institutes of Health and Centers for Disease Control and Prevention.

But the current generation of public health and medical workers had never done a smallpox vaccination. People had no idea how. It’s not just a shot. You don’t even carry out the vaccine process the way you do polio. There’s a whole biological and epidemiological strategy that has to be executed.

People often talk about how all the years spent training, at huge cost, public health workers and hospital workers all over America, to execute this massive effort, constituted dual-use and somehow weren’t a waste of money. Really? Because it turns out the way you’d carry out a vaccine campaign for smallpox isn’t the way you’d carry out of a flu immunization. We learned that during the H1N1 swine flu outbreak.

Wired.com: So it would have been better to hire nurses and doctors, to research pathogens and improve disease surveillance networks.

Garrett: Absolutely. But here’s the catch-22: Some communities that were underserved historically, such as the state of West Virginia, were able to hire workers and boost their state health departments. And then the states cut their budgets, because they were getting federal money. Then, when the feds got wind of this, they started penalizing local jurisdictions, demanding that they spend their money on bioterrorism — “You can’t spend money on mammograms and syphilis monitoring and infant health. How dare you!”

I remember being in a conference in Durango, Colorado. All the people there were freaked out because they’d had the first cases of West Nile viruses appear in the area. But the governor had cut public health budgets across the state. The threat of a real virus was overwhelming them, and they had nobody to track it. And that’s a typical example.

Every aspect of American infrastructure, especially health, is genuinely capable of performing multiple functions and has to be funded accordingly and sustainably so. But we’re seeing the opposite. Budgets are getting hacked right and left. Health departments are cutting right and left.

Wired.com: The problems you’re talking about involve large institutions and national-level bureaucracies. They seem out-of-reach. Beyond complaining to a politician, is there something people can do to make the situation better?

Garrett: When public health is at its best, it’s a local, community-based operation. The community knows who its public health officers are. Most public health departments are always looking for volunteers to go out and do education and teach kids about cavities and brushing their teeth. That’s public health. It might not sound sexy, it might not have bells and whistles, but at a time when we’re doing fiscal cutbacks on such a dramatic level, if the public doesn’t step up then those functions don’t get done.

Read 3029 times
Published in News Technologique-Tech News
More in this category: « The W3C's New ?Do Not Track? Group Aims For Better Web Privacy Storyboard Podcast: Who is Mr. Know-It-All? He Answers (Naturally) »
back to top