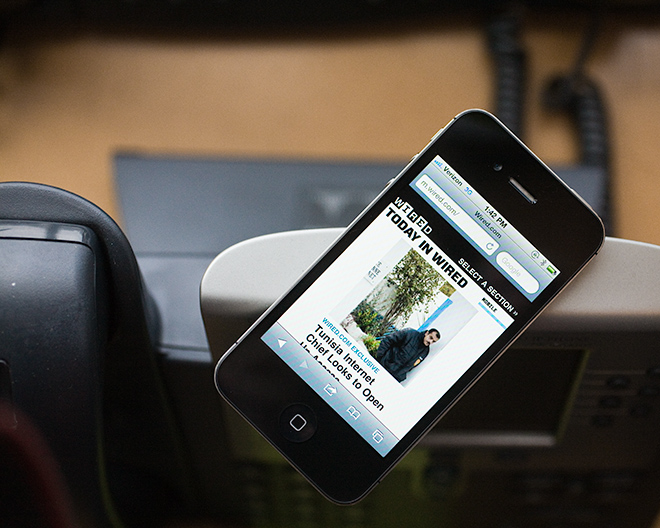 The Verizon iPhone 4 allowed the iPhone to act like a phone again. Photo: Jonathan Snyder/Wired.com

The iPhone undoubtedly is among the most popular phones ever, and yet another survey shows it continues resonating with consumers.

“Our results are based on consumer experience. The intuitiveness of the device itself and ease of operation are important factors, and are cornerstones to most of Apple’s products,” says Kirk Parsons, senior director of wireless services at J.D. Power and Associates.

The online survey uses daily interviews to poll current owners of branded smartphones and people who don’t own a smartphone. The data is then collapsed into six month periods, so if you get a phone that’s well received, that manufacturer’s score rises accordingly.

“HTC and Motorola’s scores were closer overall to Apple last year than this year,” said Parsons.

“The iPhone is a beautiful jewel of a device, and it works just the way it should. It’s intuitive, and it’s dead simple,” says Leander Kahney, editor and publisher of Cult of Mac (and a former Wired.com managing editor and news editor). “It’s taken the pain out of personal computing in so many different ways.”

The iPhone has helped propel Apple to record revenues since its debut, breaking several sales records along the way. It was among the first smartphones to successfully implement a touchscreen and ditch the keyboard, making it utterly unlike peers like the first generation Sidekick phones, which featured QWERTY keyboards and no onscreen touch controls. With the introduction, and continued popularity, of the Apple App Store, the iOS solidified itself as a robust, capable platform on the iPhone.

Although the endless stream of rumors can get tiresome, the iPhone remains a buzz magnet because Apple’s upcoming products and technological developments are so closely guarded.

“Apple is so secretive. It’s such an aggressive company. There’s this great anticipation that they’re going to push the state of the art even further,” Kahney says. According to J.D. Powers and Associates, that certainly helps Apple stay at the top of the rankings.

“It’s not unexpected that satisfaction is higher for devices that have new technological advances or features,” said Parsons in the press release.

Or that consumer anticipation rises when those new technological advances get close to their release date.

For instance, reports of the iPhone coming to Sprint in October have persisted for the last few months, with analysts corroborating the move. But it now looks like Sprint not only will have the iPhone, they’ll be offering up unlimited data plans for the handset, too. Competitors Verizon and AT&T already have killed their unlimited data plans. Sprint currently offers a $100 unlimited data plan for BlackBerry smartphones and the HTC Evo.

Reports that ship times for the iPhone 4 were delayed, followed by the removal of shipping times on the Apple website’s product pages, the feeling that the next chapter in the iPhone saga is near has become practically palpable.