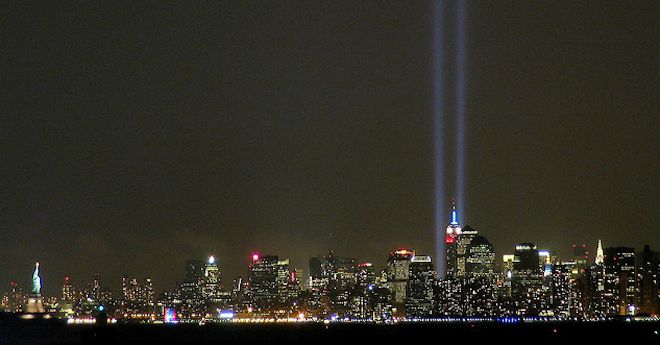 Today, of course, marks the 10th anniversary of the attack on the World Trade Center. Everyone old enough to remember it has a story of that day. Here’s mine: I was on my way to work as a newspaper reporter. I heard the news, turned my car around, gave my cat extra food, and picked up spare clothes and flat shoes. Later, I heard that two of my cousins, and two acquaintances, were missing. By dusk, I learned my cousins had walked across a bridge into Queens, part of an ash-covered tide of refugees. By midnight, I knew my acquaintances were dead.

So let me tell you, instead, some other peoples’ stories of that day and what came after: the terrorism first, and then the fears of a bioterror attack to follow; the relief when no epidemic appeared, and then the sinking shock when it did. The disease detectives of the Centers for Disease Control and Prevention were at the center of that month of horror and confusion. Between now and Oct. 4, the 10th anniversary of the announcement of the anthrax attacks, I’ll run excerpts from Chapter 12 of my book Beating Back the Devil, about the disease detectives — the Epidemic Intelligence Service — of the CDC.

When they had a chance to look back, everyone remembered that it had been a beautiful day. The sky was a pure blue arch, unmarred by cloud. It was warm — in Atlanta, early September is an extension of summer — but there was a cool breeze freshening. The trees were all green; only a few of the dogwoods showed a tinge of red along the edges of their leaves. All the way up the Eastern Seaboard, the weather was perfect.

At the CDC, Epidemic Intelligence Service director Dr. Doug Hamilton was late for Tuesday morning seminar, the mandatory grand rounds for the CDC’s trainee disease detectives. The seminar was always held in Auditorium B on the street-front side of the campus. It was the CDC’s fanciest conference room, the place where dignitaries were welcomed and new EIS members took their first weeks of training. It had rows of movable chairs, blond wood walls and a ceiling made of rippling, curved acoustical panels that looked like an abstract sculpture. Its central feature was a huge projection screen that stretched across the back of the stage. When EIS members made presentations about their investigations, audiovisual technicians in a darkened-glass control booth built into the room’s left wall threw their Powerpoint slides on the screen. When they took questions about their research, the techs patched in a video-conference link to other CDC locations, and projected the questioners’ faces on the screens instead.

Tuesday morning seminar always began at 9 a.m. Hamilton arrived about three minutes afterward. As he pulled open the double doors at the back of the auditorium, his boss, Dr. Stephen Thacker, caught up with him and held him back.

“A plane has hit the World Trade Center,” Thacker said. “Should we make an announcement?”

Hamilton envisioned a small touring plane losing its bearings in the visual flight corridor down the center of the Hudson and hitting the side of New York City’s tallest buildings. He shook his head. “There’s nothing we can do,” he said. “Let’s go on with the seminar.”

He slid into a seat in the back row. Ten minutes later, one of the technicians tapped him on the shoulder from behind. “Another plane just hit the World Trade Center,” he whispered.

Disbelieving, Hamilton got up and followed him into the control booth. On their desk screens, the techs had turned off the Powerpoints and switched to CNN. The channel was running the same loop of tape, over and over: The first jet, slamming into Tower One of the World Trade Center; the flash of its disintegration; the plume of smoke boiling slowly across the perfect sky. Underneath the image, the newscrawl crept by: Passenger plane hits the World Trade Center, 8:46 a.m.; second plane crashes, 9:02 a.m.

Hamilton watched the loop a dozen times, trying to absorb what he was seeing. Shaken and dazed, he walked back to his seat. Thacker was across the auditorium, next to retired CDC director David Sencer; they always sat in the same spot, halfway up the aisle.  Next to Hamilton’s empty seat, though, Dr. Denise Koo had settled into the back row. She was in the same division, above Hamilton and below Thacker on the organizational chart.

“You’re not going to believe what’s happening,” he said to her.

The two were deep into a whispered conversation when the technician nudged Hamilton again. It was not long after 9:40 a.m. He didn’t bother to lower his voice this time.

“A plane has hit the Pentagon,” he said.

The seminar stopped. The speaker sat down. The technicians threw CNN on the huge video screen. The staff in the auditorium, and the ones on the other end of the video links, watched in silence. A few of them left to make family phone calls. A few cried.

By the time the second tower collapsed, Hamilton had reached his fifth-floor office two buildings away to gather email addresses and phone numbers. What was unfolding was a national emergency. The EIS existed to serve in such emergencies. He was sure the group would be summoned to action — though, watching the endlessly replaying tape of the collapsing towers, he was not sure what they could do.

The chime of a high-priority email cut across the mutter of the television. A plane without a flight plan had been detected heading toward Atlanta. The CDC was being evacuated.

Marci Layton had come to work early that morning. She was giving three speeches in Canada the next day, and she wanted to get her slides in order. The workload in the New York City Department of Health was so intense that she knew she would have no spare time once the daily round of calls and meetings started.

Layton was one of the department’s assistant commissioners and the chief of its bureau of communicable diseases. She had just passed 40, a slender, energetic woman with curly, center-parted light-brown hair and huge blue eyes. She was a graduate of Duke Medical School who had done residency in Syracuse and an infectious-disease fellowship at Yale; in between academic stints, she had volunteered in clinics in Nepal, Thailand and Alaska.

The New York health department was housed in a 10-story while marble pile decorated with pylons and columns on the outside and elaborate Art Deco detailing inside, down to octagonal brass door handles embossed with “City of New York.” It faced south across a small park toward City Hall and Wall Street; the World Trade Center, eight blocks away, filled the view. Layton had worked there for nine years, since arriving in the summer of 1992 as an EIS officer. Her predecessor in her Yale fellowship had been assigned there and persuaded her to ask for the slot after him. In New York, he said, every disease she had seen in the Third World would show up on her doorstep.

The health department lies in a part of the city that is seldom quiet. Trucks rumble by day and night, heading for the Manhattan and Brooklyn Bridges. A subway line runs directly underneath the building. Planes on approach to LaGuardia and Kennedy pass constantly overhead. Still, the boom that shook Layton’s office about an hour after her arrival was disorientingly loud. It sounded, she thought, as though a plane had crashed.

Shortly afterward, her phone rang. It was her parents in Baltimore. They wanted to be sure she was okay.

She listened to what they were describing, and then she put down the phone and walked to the other side of the building, to windows that faced southwest. She saw the gaping holes in the sides of the towers and the fires bellying out of them. Bodies were falling from the floors above.

The next time she had a moment to look out the window, it was 2 a.m.

In the panic that followed the attacks, it was hard to get a grip on what was happening. TV reception went out when the buildings fell. Electrical power was patchy; cell phone reception, too. The landlines died at 2 p.m. The health department assumed the towers’ collapse would bring thousands of people streaming into emergency rooms. They sent staff out to walk to the closest hospitals, to log the injuries and see what extra staff and supplies were needed.

The answer was, very little. Over two days, four ERs and a burn center would see only 1,688 patients. Most arrived within 8 hours of the attacks; three-fourths were able to walk into the ER and to walk away afterward. The injured were mostly not survivors from the towers; they were passers-by, or first responders who had rushed downtown. Thousands of people had made it out of the buildings, but they mostly worked on floors below the crash sites. The vast majority trapped above, on 17 floors of Tower One and 32 floors of Tower Two, had died.

There seemed to be no wave of trauma victims that would overwhelm city hospitals, so the health department turned to the next set of problems: air quality, water safety, getting care to the homebound elderly and disabled. Restaurant customers and staff in the financial district had fled leaving food on the tables; it was a buffet for rats and insects emboldened by the lack of people in the stores and streets. And there was a further lurking concern. Since the first World Trade Center bombing in 1993, law enforcement, the health department and the city’s emergency management office had war-gamed possible terrorist attacks. They had predicted that a conventional assault would be followed by a second, unconventional one, something insidious, something that would be masked by the chaos and disruption. Bioterrorism was their best guess.

Fourteen hours after the towers collapsed, at 2 a.m. on Sept. 12, Layton and her colleagues met to figure out how to detect a bioterror attack before it spawned an epidemic. They assumed it would come with a whimper, not a bang — not a hundred cases of disease in a single place, but a few patients in one emergency room and a single case in another, or in a doctor’s office, or in a street-corner clinic. Those were places that would have no connection to each other and would never recognize they were part of a brewing outbreak. Layton needed a way to identify those potential victims, no matter where they were in the city, as soon as they sought help.

New York already had a system that detected public health anomalies, a computer program that analyzed ambulance-transport records to spot emerging trends. But ambulances too had been disrupted by the chaos in the city. Patients who arrived at emergency rooms were not riding in ambulances, but were getting there on their own.

The only alternative would be actually putting health department representatives into emergency rooms, to gather data from doctors while they were evaluating patients. It had been tried before, at the Olympics and at political conventions; it seemed to be effective, though there had never been a bioterrorist attack to test it against. But it was cumbersome and hugely labor-intensive. The health department had nowhere near enough personnel to make it work. Layton called the CDC in Atlanta, and asked it to send any EIS officers it could spare.

Next:The disease detectives fan out across the city, looking for signs of a covert attack.

Read 3694 times
Published in News Technologique-Tech News
More in this category: « Sept. 12, 1958: Kilby Chips In, Integrates Circuit Broken Arrow (Or: My Dear John Letter to Oliver Queen) »
back to top