How 9/11 Completely Changed Surveillance in U.S. 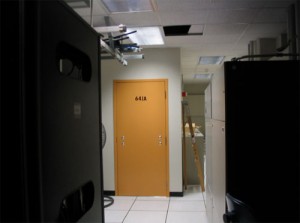 Mark Klein took this picture of the entrance to Room 641A in AT&T's building on Folsom Street in San Francisco. The room housed internet spying equipment Klein says was installed by the NSA.

Former AT&T engineer Mark Klein handed a sheaf of papers in January 2006 to lawyers at the Electronic Frontier Foundation, providing smoking-gun evidence that the National Security Agency, with the cooperation of AT&T, was illegally sucking up American citizens’ internet usage and funneling it into a database.

The documents became the heart of civil liberties lawsuits against the government and AT&T. But Congress, including then-Sen. Barack Obama (D-Illinois), voted in July 2008 to override the rights of American citizens to petition for a redress of grievances.

Congress passed a law that absolved AT&T of any legal liability for cooperating with the warrantless spying. The bill, signed quickly into law by President George W. Bush, also largely legalized the government’s secret domestic-wiretapping program.

Obama pledged to revisit and roll back those increased powers if he became president. But, he did not.

Mark Klein faded into history without a single congressional committee asking him to testify. And with that, the government won the battle to turn the net into a permanent spying apparatus immune to oversight from the nation’s courts.

‘I didn’t expect the terrorists would be so successful ultimately into getting us to abandon our core principles.’

Klein’s story encapsulates the state of civil liberties 10 years after the shattering attacks on Sept. 11, 2001. After a decade, the country is left with a legacy of secret and unilateral executive-branch actions, a surveillance infrastructure whose scope and inner workings remain secret with little oversight, a compliant judiciary system that obsequiously bows to claims of secrecy by the executive branch, and a populace that has no idea how its government uses its power or who is watching out for abuses.

“As someone who was in the Financial District of Manhattan on 9/11, that was a horrifying morning for everyone,” says Kevin Bankston, a lawyer for the Electronic Frontier Foundation, who’s still fighting to reinstate the lawsuits his organization filed against the government and the telecoms. “Yet I didn’t expect the terrorists would be so successful ultimately into getting us to abandon our core principles, and I think the founders would, in many ways, be ashamed of our response to the attack.”

Sen. Ron Wyden (D-Oregon) in August put a hold on Obama’s push to renew the surveillance powers until the administration investigates how many people in the U.S. have had their communications “reviewed” by the feds. The director of national intelligence responded that “it is not reasonably possible” to determine that number.

In the post-9/11 bureaucratic frenzy to never let a similar attack happen again, the Congress rushed to pass the Patriot Act, a domestic-surveillance wish list full of investigatory powers long sought by the FBI. And the government created the Department of Homeland Security, an unwieldy amalgamation of agencies united under a moniker straight out of a bad science-fiction novel.

Those who thought that the election of Obama would “re-change” everything were mistaken. Instead, the administration has carried on the Bush-era policy of using high-level classification and the “state secrets privilege” to block court challenges to the unsavory aspects of the “War on Terror.”

So endemic is the secrecy, that Jim Harper, director of information policy studies at the Cato Institute, says he can’t answer the question about what the state of surveillance and civil liberties is in the U.S. a decade after 9/11.

“The best answer is, I don’t know,” Harper said. “We have had a real breakdown in government and public oversight of government. We have a real secrecy problem in this country.”

But Harper does think that the next decade we’ll begin to see some questioning of the money being spent on Homeland Security programs and that the courts will start to stand up more to the executive branch.

There’s no way to confirm if you are on the No-Fly or Secondary Screening list, and no way to challenge them.

Well-known examples of secrecy are the No-Fly and Secondary Screening lists. The government initially refused to admit the lists existed, and struggled for years to deal with a system that has never caught a terrorist, but has inadvertently caught soldiers, politicians, children and even a prominent nun.

Most recently, the Obama administration was caught using the No-Fly list as a way to keep American citizens from flying back to the States, in order to interrogate them overseas.

There’s no way to confirm if you are on either of these lists, and no way to challenge them or see the evidence against you.

“It’s pretty black-and-white,” Harper said. “It’s just entirely unconstitutional to have a direct executive branch punishment without the intermediary of a judge.”

As for the Patriot Act, government watchers point to National Security Letters as the prime example of abuse of the government’s expanded powers under the “War on Terror.” So-called NSLs are self-issued subpoenas that FBI agents can use to get phone and other transaction records. The FBI began using tens of thousands of such letters every year after the NSLs’ reach was expanded by the Patriot Act.

The Justice Department’s inspector general has issued a series of scathing reports, including one that found that FBI agents used fake emergency requests to gather data on Washington Post and New York Times reporters, and that AT&T and Verizon were paid to open offices inside the FBI, where employees for the telecoms let FBI agents search phone records without doing any paperwork — in blatant violation of federal law. The violations were then effectively legalized retroactively by a ruling from the Obama administration’s Office of Legal Counsel.

Now, the Administration is telling the American people that al-Qaida is on the ropes. But it seems unlikely that Americans will witness, or even demand, the withering away of the Homeland Security industrial complex.

While there are many reasons for that, perhaps the most important one is the imperative that started just post 9/11, when President Bush turned to Attorney General John Ashcroft and said, “Don’t let this happen again.”

It’s those words, and that sentiment, that have kept electronic surveillance powers in effect — even though they’ve largely proved to be a source of dead ends for those battling al-Qaida.

‘We begin to assume that the more our liberties are invaded, the more secure we are.’

“There is no evidence that the ability to conduct broad electronic surveillance with less judicial supervision has been key to the intelligence successes we have seen since 9/11, and the absence of those powers were not an important factor before 9/11,” says Julian Sanchez, a research fellow at the Cato Institute.

And Sanchez notes that the number of U.S. persons who had records siphoned up by the FBI in 2010 reached over 14,000 — a new record. “We have become so accustomed to talking about the balance between civil liberties and security that we begin to assume that the more our liberties are invaded, the more secure we are, when there is very little evidence that is the case,” Sanchez said.

Both Harper and Bankston see reasons for hope that the court system may have lost its post-9/11 habit of deferring to the federal government anytime it invoked the words secrecy and national security.

Bankston cited a recent court win for the ACLU, where the government is being forced to reveal information about the number of people who have been tracked through their cellphones without investigators getting a warrant.

“There are always signs of hope that keep us going where we can occasionally get a window in the what the government is doing, and we will keep looking for those windows,” Bankston said.

Read 1798 times
Published in News Technologique-Tech News
More in this category: « How to Beat Terrorism: Refuse to Be Terrorized GRAIL Heading to the Moon With MoonKAM »
back to top