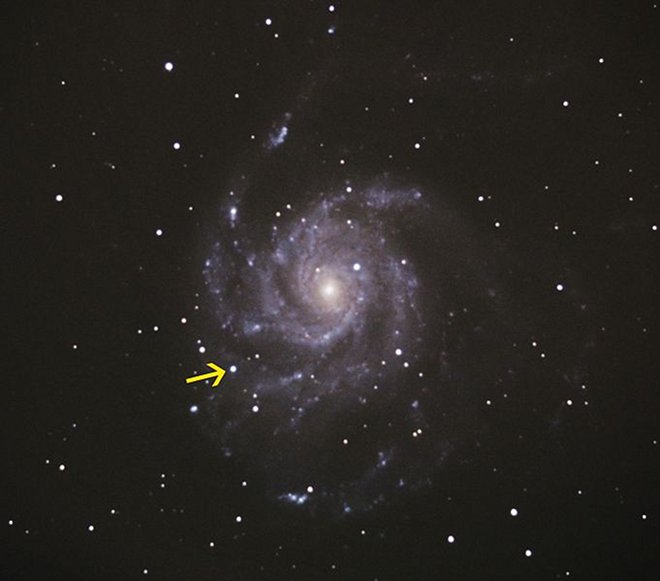 Backyard astronomers pointing their telescopes at the supernova currently glowing in the Pinwheel Galaxy are asked to share their observations with scientists.

SN 2011fe, the brightest supernova to be seen from Earth in nearly 20 years, was first discovered by astronomers with the Palomar Transient Factory on Aug. 24 and is estimated to have reached peak brightness on Sep. 9. The exploding white dwarf star, a type Ia supernova, is now nearly a thousand times brighter than when it was first spotted, and can be seen by modest-sized backyard telescopes. 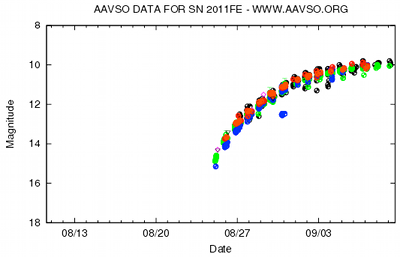 Amateur astronomers, using 6-inch or larger aperture telescopes, can help researchers study the supernova by submitting their observations to the American Association of Variable Star Observers. Tutorials are included on the AAVSO website.

At peak brightness all type-Ia supernovas give off nearly the same amount of light, allowing astronomers to estimate how far away they are from Earth.

While astronomers already know the approximate distance between Earth and M101, the Pinwheel Galaxy, close observations of SN 2011fe will allow them to fine tune our understanding of supernova evolution and the relationship between distance and peak brightness.

To help people accurately estimate supernova brightness, the AAVSO produces comparison charts and observing manuals. The astronomers are especially interested in the observations and images of any deep sky photographers who caught the Pinwheel Galaxy between Aug. 23 and 25. Without knowing it, they may have caught the supernova early.