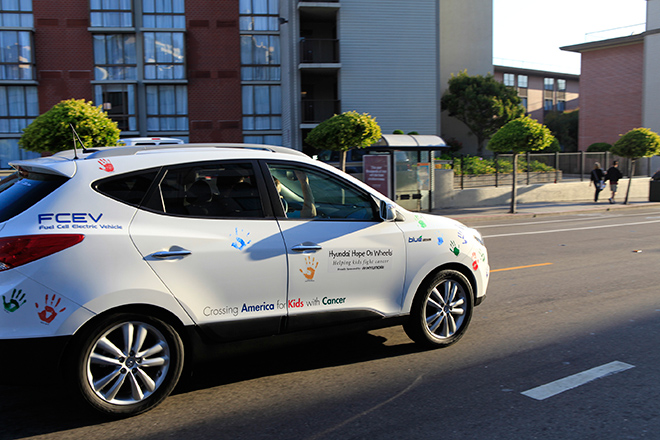 Hyundai is hyping hydrogen, cruising cross-country in a fuel-cell Tucson to turn people on to the fuel of the future.

We’ve seen this before, from the likes of Daimler and Honda and even Toyota, all of whom firmly believe hydrogen will mend our fuelish ways. For all the love hybrids and battery electrics get these days, several leading automakers still say hydrogen is the best long-term play.

Hyundai’s been experimenting with hydrogen for more than a decade, and it is conducting a 4,500-mile tour through 15 states in the Tucson ix FCEV and to promote its advancements and advocacy of the technology. This is the company’s third-gen Tucson fuel cell vehicle, and Hyundai let us put a few miles on the car during its drive through San Francisco.

Aside from a paint job featuring colorful handprints — to promote the automaker’s Hope on Wheels fundraising program — the fuel cell Tucson looks like the Tucson you’d see in any showroom. Turn the key – ignition isn’t the right word here – and you notice a difference, however.

The vehicle begins with a sucking sound, like a valve slowly closing. If you’re outside the car, you hear a slight hum from the drivetrain. But inside the car, which is comfortable and quite nicely appointed, the Tucson is as silent as an electric vehicle. Which, of course, it is. The only difference is the Tucson uses a fuel cell instead of a battery to provide most of the juice.

Hyundai says the 100-kilowatt fuel cell is the same size as the 2.4-liter engine in a conventional Tucson. The fuel cell and motor are under the hood, and the 21 kilowatt-hour battery is under the floor. A tank at the rear holds 144 liters of hydrogen at 700 bar (roughly 10,000 PSI). Everything is packaged tidily out of the way, leaving plenty of interior room.

On the road, the machine drives like any other Tucson, but with a little less power. The motor is good for 100 kilowatts (134 horsepower), which is considerably less than the 165 horsepower provided by a Tucson GL with a four-banger. But there’s loads of torque and, of course, nothing more noxious than potable water coming out of the tailpipe.

Hyundai wouldn’t let us really open it up, though. Joshua Marmelstein, the engineer riding shotgun with us, asked us to keep the motor output below 25 kilowatts. Hydrogen may be the most plentiful element in the universe, but isn’t exactly easy to come by when you need to fill your tank. Hyundai didn’t want us using so much that the Tucson wouldn’t reach its next stop.

Still, we got a good enough feel for the Tucson to say that it is, like the Honda FCX Clarity and the Mercedes-Benz F-Cell we’ve driven, a real car. You could drive it all day long, quite happily. It does everything you want it to.

The big pitch for hydrogen is, of course, that it offers the zero tailpipe emissions and energy independence of battery electric vehicles without the limited range and long recharge time. You can fill the Tucson’s tank quite quickly, and it has a range of 650 kilometers (roughly 404 miles). Hyundai says it gets the equivalent of 70 mpg, or more than twice the highway fuel economy of a four-cylinder Tucson.

Hyundai isn’t alone in preaching the hydrogen gospel. Honda’s been leasing the Clarity for a couple of years, and both Mercedes-Benz and Toyota plan to offer fuel cell vehicles for sale in 2015. The two automakers are shooting for a price in the $50,000 ballpark. The price is driven in large part by the fuel cells, which use rare materials like platinum.

But cost has always been only part of the problem. There is no significant infrastructure to speak of for producing, distributing and storing hydrogen on a large scale. There are half a dozen or so stations in California — the latest opened near Los Angeles earlier this year, and public stations beyond the Golden State are few and far between. It’s enough of a problem that Hyundai will rely upon support vehicles carrying tanks of hydrogen to get it through the midwest.

And then there’s the whole issue of how hydrogen is produced, the fact it’s most often transported by truck, the argument that it won’t be adopted fast enough to make a difference, and… and… but those are issues for another post. Actually, we’ve already written that post.

The bottom line is, Hyundai — like Daimler and Honda — are optimistic the infrastructure issue will be sorted out. Company spokesman Christopher Hosford suggests starting with hydrogen stations along trucking routes. Do that, he says, and the rest of the country will follow.

Maybe. It it does, it could do worse than to do so in a Tucson ix FCEV. 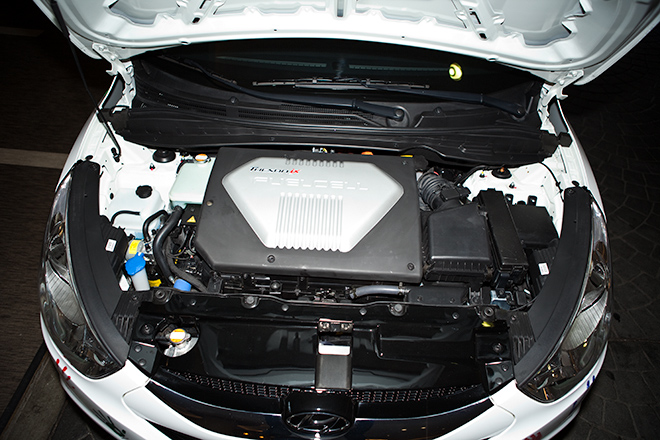 You’ll find the fuel cell under the hood. It draws hydrogen from tanks mounted under the car.

Read 2296 times
Published in News Technologique-Tech News
More in this category: « Now We Can All Use the FBI Anti-Piracy Warning! Dangerous and Sad: Rising Suicides by Chemical Fumes »
back to top