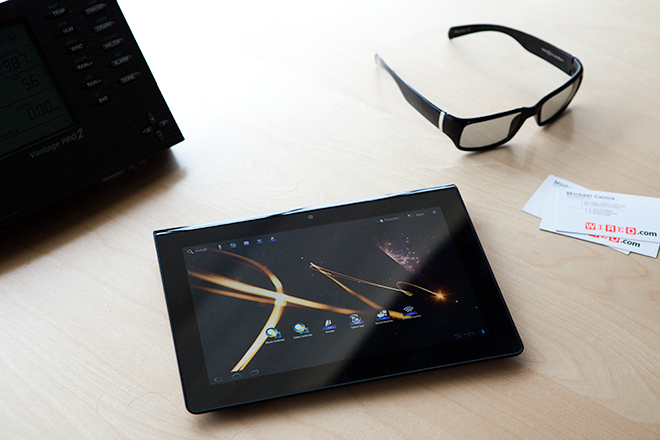 Android fans who like to get their game on will be pleased to know GameStop is getting into the tablet scene with its own Android tablet.

“We’re in test phase right now. But we’re excited at the prospect of coming out with this tablet. I would call it a ‘GameStop certified gaming platform,’” Bartel said. “We looked at all the tablets and these are the ones that really worked for gaming and we’re going to give you a few benefits that you’re not going to get elsewhere.”

Sony, maker of the PlayStation and PSP, also recently debuted a pair of Android tablets, including the “PlayStation-Certified” Tablet S, above, which comes preloaded with Crash Bandicoot. Tablet gaming has been a hot commodity on both the iOS and Android platforms. And although hardcore gamers tend to stick with consoles, the casual gaming industry is booming.

According to data from Resolve Market Research, 46 percent of tablet owners who also have a gaming console or portable gaming device report playing games much more often than they did before owning a tablet. By providing traditional gamers with a primarily game-oriented tablet, GameStop and Sony may be tapping into a burgeoning niche market that could possibly chip into the iPad’s dominance in the tablet space.

“Consumers are making room for multiple gaming platforms, and casual gaming on a tablet is an integral part of the consumers’ daily gaming activities,” says Randy Hellman, a senior analyst with Resolve MR. “What we are seeing is that tablets are carving out their own gaming niche.”

Details on GameStop’s upcoming Android tab are scant, but Bartel did reveal a few things.

“There’s not a lot of tablet/android based games for the consumer that are designed to use an external controller. There are a few games out there and more that are coming, but our thought is that the tablet is a great immersive gaming device so it’s hard for us to envision how that tablet will really function as such without some sort of controller… So we’ve created a controller…”

This seems in line with what game designer Graeme Devine said at this year’s Game Developers Conference.

“Touch is the best game interface we have available today,” he said, continuing that when a game puts a virtual joystick or traditional controller on the screen, it defeats the purpose of the platform.

But a mix of touch play and a dedicated controller, as Bartel’s quote suggests, sounds like it could provide a variety of gaming options, and possibly some new ones we haven’t really seen before, especially on Android.

For the iPad, old school gaming aficionados can get their fix with retro arcade-style gaming accessories from ThinkGeek or Atari. It seems, unfortunately, that accessories for the Android tablet gaming market have been largely ignored.

But are avid gamers even ready to jump onto the tablet gaming bandwagon?

“The tablet will have difficulty evolving into a dedicated, hardcore gaming platform. The simple nature of a tablet experience as an instant-on, multi-tasking device just does not complement the hardcore, deeply immersive gaming experience console gamers will appreciate,” Hellman says.

Gamers and tablet users — does the prospect of a GameStop-branded tablet whet your appetite? Sound off in the comments.