The Quest for the Golden Nintendo Game 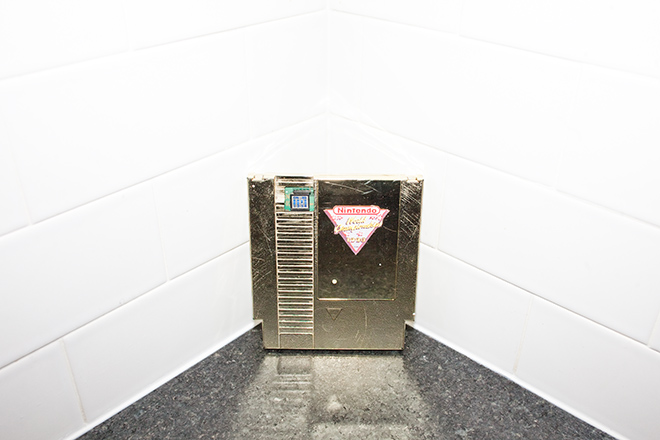 This gold-hued Nintendo World Championships cartridge is one of the most valuable videogames in existence.  Photo: Jon Snyder/Wired.com

One Friday afternoon in 2010, Pat Contri got the Facebook message of every videogame collector’s dreams. A friend who worked at the local game store started texting him cryptic photographs of something a customer had just traded in.

He stared at the blurry, gray-and-green pictures. What at first looked like a row of shelves, he eventually realized, was a close-up of several exposed DIP switches. Just then, like a Tetris block dropping neatly into place, it clicked. Contri slammed his finger on the “Call” button.

“You better not be fucking with me,” he said the second his friend Ian picked up. On the other end of the line, Ian sounded like he was hyperventilating.

“It just … walked into the store,” Ian said.

Contri owned hundreds of Nintendo games, almost the full set, but what had “walked into the store” was something he’d never laid eyes on before: A Nintendo World Championships cartridge. Only a handful were known to exist, and they commanded upward of $5,000 each from collectors.

Now one of the incredibly rare cartridges — known to hard-core Nintendo collectors as the Holy Grail — had randomly shown up a mile away from Contri. “It’s almost like I was destined to have it,” he said.

Like baseball cards and comic books, videogame collecting is fast becoming a popular and expensive hobby. Collectors share (and sometimes hoard) information in online forums, print up price lists, and meet up to buy and sell vintage games at shows like the Portland Retro Gaming Expo. No matter how obscure the old game hardware, there’s a subgroup of collectors devoted to cataloging everything released for it.

The hottest area of collecting today is the classic Nintendo Entertainment System. Released in 1985, the 8-bit NES dominated the videogame landscape to an extent that no single game machine has since.

“Kids nowadays that have an Xbox 360 or a PlayStation don’t realize how large a part of everyone’s childhood [Nintendo] was,” says collector Contri. “It was all anyone knew about.”

Nintendo sold 34 million Nintendo Entertainment Systems in the United States alone and more than 200 million games. Most of those titles are worth a couple of bucks today, far less than their original $30 or $40 retail prices. But as more and more people get into the hobby and start building out their collections, prices on harder-to-find games have been skyrocketing.

Mint-condition copies of early educational game Donkey Kong Jr. Math have sold for north of $500. Complete editions of The Flintstones: Surprise at Dinosaur Peak demand even more than that. These are not fun games. They’re just difficult to find, especially with their original boxes and instruction manuals. Examples of these games still in their original shrink-wrap packaging routinely fetch thousands of dollars.

And then there’s the Holy Grail.

Every serious collector knows about it. Many dream of finding one, but few have ever seen one in person.

It’s covered in shining gold — well, gold paint, actually — but to a Nintendo collector, it’s more rare and valuable than any precious metal. The Nintendo World Championships cartridges contain the unique three-game, six-minute triathlon challenge the company used to find the best Nintendo players in America during the summer of 1990.

‘That cartridge is infamous.’

“That cartridge is infamous,” says Nintendo collector Jason Wilson. “Everybody is aware of the 1990 World Championships. It may not be the rarest item out there … it’s just the most well-known.”

There are two versions of the cartridge: There are gray-colored ones that were given to the 90 finalists in the Nintendo World Championships, hard-won prizes for a grueling gaming competition that consumed the lives and thumbs of thousands of Nintendo maniacs one long summer in 1990. Many remain undiscovered.

Wired.com tracked down some of the Nintendo World Championships participants and serious videogame collectors whose lives have touched by these coveted artifacts of a bygone 8-bit era. Here are their stories.