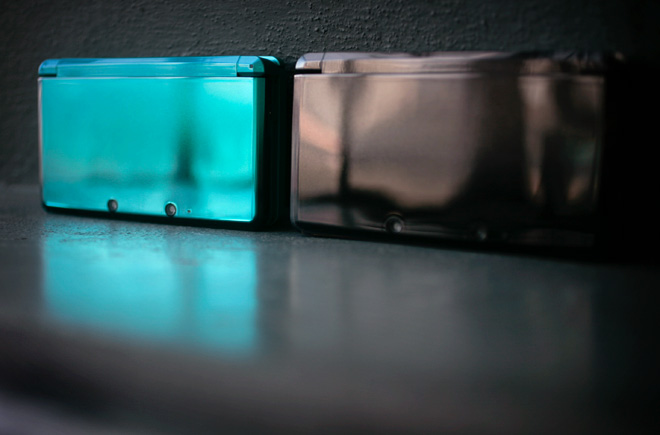 Nintendo is readying a wave of new games for its 3DS handheld, including Monster Hunter 4.
Photo: James Merithew/Wired.com

TOKYO — Nintendo put the focus on new Nintendo 3DS games at its press conference here Tuesday morning, dropping the bombshell that the next Monster Hunter game is in development for the portable gaming device with the 3-D screen.

The company did not talk about the strongly rumored “slide pad” attachment for 3DS that would add a second analog joystick to the console. It did not, as some expected, announce a refresh of the hardware’s design. It said it would be rolling out system updates that would add new features to the 3DS firmware, but declined to give any details. Instead, all Nintendo President Satoru Iwata did at the conference was announce a volley of new retail games for the Japanese market, one after the other.

Wired.com’s live blog coverage, with a list of all the games Nintendo announced Tuesday, is below.

A second joystick? A new version of Monster Hunter? Can anything make the Nintendo 3DS more appealing to gamers and developers?

Nintendo will attempt to answer that question with a big press conference Tuesday afternoon in Tokyo. Wired.com is here in Japan’s capital city for the Tokyo Game Show later this week, but Nintendo is not allowing any non-Japanese press outlets into the conference. However, it is streaming the Japanese-language conference live today over Ustream.

We’ll be liveblogging it here (in English!) when it begins at noon Japan time (8 p.m. Pacific).

12:00: Looks like things are kicking off with a video of Zelda: Skyward Sword for Wii.

12:01: Shigeru Miyamoto comes onstage bearing the Zelda sword and shield. He says that this is a 3DS conference, but he’d like to take a little bit of time to introduce Skyward Sword for Wii. It’s been 25 years since the release of the first Zelda game.

12:03: Moves on to talking about Four Swords, upcoming multiplayer Zelda for DSiWare download. And now he’s picking up the sword and shield again to explain Skyward Sword’s MotionPlus-driven realistic swordplay.

12:06: He’s showing a wide range of ways that the buttons and motion control of the MotionPlus controller can be used for very smooth action in Skyward Sword. Wow, he’s running through a whole range of features very quickly: Items that can be powered up (improving a red potion so it restores more health, etc.), a machine that blows sand around so you can clear it off the floor….

12:10: He closes by talking about how they’re hoping players won’t have to think too hard about the swordplay, that it’ll all be muscle memory.

12:11: Big teaser reel of lots of 3DS games that I assume they’ll be talking about in short order. Caught a glimpse of a new LovePlus, so you can have a virtual girlfriend!

12:12: Satoru Iwata takes the stage and says he’s going to talk very briefly first about major new Wii games coming this year. The Dragon Quest collection is coming out the day after tomorrow. Then there’s Just Dance, Go Vacation, Kirby for Wii and the latest Taiko Drum Master. Finally, there’s Skyward Sword in November. In December, there’s Fortune Street for Wii and Mario and Sonic go back to the Olympics. Plus Pokepark 2 toward the end of the year.

12:15: Starting in on Nintendo 3DS now. Nintendo 3DS doesn’t have as many female users as Nintendo’s other platforms, so Nintendo is introducing a “Misty Pink”-colored console Oct. 20.

12:17: Nintendo is planning three major classes of upgrades to the Nintendo 3DS soon. It’ll be able to shoot 3-D movies, something they’ve been working on since before the hardware came out. They’re going to make major changes to the Street Pass Mii Plaza, and to the eShop, Iwata says. No details just yet on what those changes will be.

12:18: Moves right along to talking about the upcoming Super Mario 3D Land game and Mario Kart 7, two major titles coming within the year in Japan (and the United States).

12:19: In addition to this, Iwata says Mario Tennis will be coming in 2012, using the gyro motion sensor. Paper Mario and Luigi’s Mansion 2 videos follow; these games are also slated for release next year. And (of course) Mario & Sonic at the London 2012 Olympic Games for 3DS.

12:24: And a sequel to the popular Japan-only communication game Tomodachi Collection is also on the way. And another Girls Mode (the fashion game released in the United States as Style Savvy), in 2012. Lots of content for girls, basically.

12:29: Getting special treatment is Dynasty Warriors Versus, a four-player version of the popular Koei action game set in feudal China.

12:31: Square Enix is making a new RPG called Bravely Default, which is possibly the greatest horrible name for a videogame not about heroic bankruptcies.

12:33: A new SD Gundam game will be out this year, by the end of December. And if you are a fan of virtual diva Hatsune Miku, a game featuring her robotic vocal stylings will be available in March 2012. Capcom is still making Resident Evil: Revelations. Bandai Namco is making Ace Combat. Tekken 3D will be out “this winter.”

12:36: The game I care the most about, Theatrhythm Final Fantasy, will also be out this winter. It’s a music game with classic Final Fantasy tunes. Slime MoriMori Dragon Quest 3 will be out in November.

12:39: Talking up Kid Icarus. But it won’t be out until the first half of next year, Iwata says. There will be some original animation videos for the game which will be shown on the Nintendo Video service.

12:44: They’re taking their time on this one, obviously. Tsujimoto from Capcom takes the stage for a handshake photo op with Iwata and explains what’s new about this version of the extremely popular game. It will be out Dec. 10 in Japan for 5,800 yen.