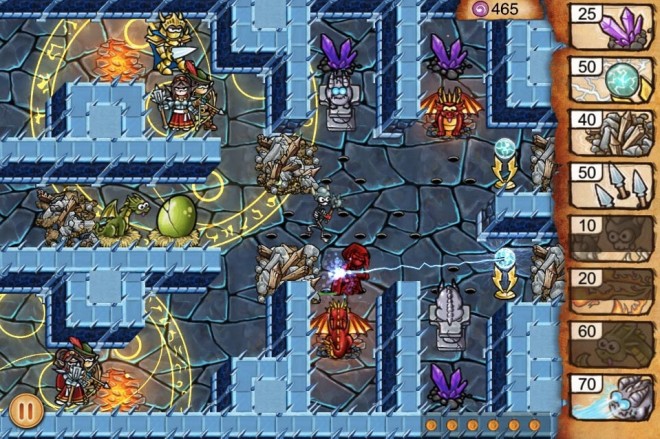 Sometimes you’ve just gotta switch things up a little bit — add some sizzle to a stagnant marriage, try a new form of jazzercise, quit your job and sojourn to the Caribbean for a few months.

Or you could try some videogame role reversal, as in the case of Tiny Heroes, a tower-defense game released last week for iPod Touch and iPhone (reviewed). While some fantasy games place you in the armored boots of an intrepid, dungeon-crawling adventurer, Tiny Heroes lends you the keys to a dungeon of your own. Instead of hunting for treasure, you’ll be fighting off treasure-hunters.

Turns out wizards and knights seem far less noble when they’re trying to steal your stuff.

In order to thwart these waves of greedy menaces, you’ll lay down a variety of traps and monsters. You can select from a large playbook of dungeon tropes, ranging from rattling skeletons to boulder-flinging catapults. There are about 50 trap options — some better than others — but you can only pick eight for each level of the game. Most of the time I stuck with my favorites, like the electricity-shooting tower and the hero-inhaling jelly cube. Others were almost completely useless, like slime traps and goblin/orc hybrids.

Resource management plays a major role on Tiny Heroes‘ to-do list, as spells and traps each have varying mana costs and your supply is limited. Placing mana-generating crystals in the back of your dungeon will help ensure that your reserves stay intact, but you must strike the right balance between these resource generators and regular defenses, much as in popular tower-defense game Plants vs. Zombies.

But while Plants vs. Zombies takes place on a series of square grids, the battlefields of Tiny Heroes change constantly. You’re tasked with defending one twisted dungeon after another, many of which feature multiple entrances and chokepoints. Part of the fun is figuring out where to place your boulders and crossbows for optimal slaughtering of enemies.

This would be far easier if those damned heroes didn’t insist upon attacking everything you own. Thieves will disable your traps, wizards will target your mana crystals and clerics will heal the whole marauding gang. Later in the game, you’ll encounter “epic” versions of each hero, most of which are capable of devastating your dungeon with a mere flick of the wrist.

Now you know how the bad guys feel in other games.

Tiny Heroes draws its charm from all the chaos. There’s always something to do; you’ll constantly be throwing down new traps and replacing old ones at a frenetic pace. It’s challenging and fun. Electrocuting and flambéing those zealous little heroes is especially satisfying when you imagine them as other gamers.

TIRED Some graphical bugs; imbalanced defenses; no way to remove traps once you’ve placed them.