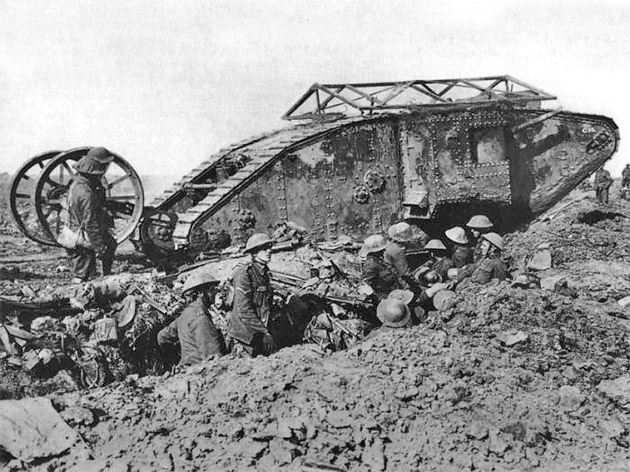 1916: The tank makes its debut as a battlefield weapon, attacking the Germans as part of a British assault near Bois d’Elville, or Delville Wood, on the Western Front.

The crude, 14-ton monster that breasted the German trenches that day was the culmination of an idea 145 years in the making.

The concept of an armored assault vehicle dated back to 1770, with the first appearance of the caterpillar track. A precursor of the modern tank — a steam-powered tractor — was actually used by the British army during the Crimean War. Only a few of these vehicles were built, though, and they carried no offensive weapons of their own.

In 1899, Frederick Simms developed an engine-driven “motor war car.” It was armor-plated and carried two Maxim machine guns, making it more akin to the armored car than to the tank as we know it. Simms offered it to the British army, but was turned down.

In the run-up to World War I, the British High Command remained indifferent to the concept an armored assault weapon, preferring to concentrate on infantry and cavalry. But the tank (or “landship” as it was then known, because it was regarded as a kind of land-based warship) had some influential advocates — including First Lord of the Admiralty Winston Churchill, whose Landship Committee kept the idea alive.

In fact, the first tanks were manned not by army personnel but by naval ratings and officers, since the Royal Navy was already responsible for the operation of armored cars on the Western Front.

The experimental vehicles got the codename tank because their shells looked like water carriers. The name stuck.

The Sept. 15 attack at Delville Wood was made by a D1 tank, commanded by Capt. H. W. Mortimore. It was followed up by a larger attack at Flers-Courcelette, which employed 15 tanks. The British had intended to commit every tank they had — 49 in all — to this assault, but only 22 of them reached the front line without breaking down, and seven of those failed to start as the attack commenced.

The Germans were profoundly shocked by the tanks’ sudden appearance and fell back, but they quickly rallied. They soon discovered that while small-arms fire and machine guns had little effect against the armor, artillery could knock the tanks out with relative ease. And the Germans had very good artillery.

The tankers themselves found the machines difficult to operate. Visibility from the viewing slits was poor, and the machines were not only prone to breaking down but were very cumbersome: They crawled along at less than 1 mph and got hung up rather easily in the trench works.

Nevertheless, the British managed to reach some of their objectives at Flers, which impressed the brass back at headquarters. Even the subsequent German counterattack, which forced the British Expeditionary Force to break off its offensive on Sept. 22, didn’t dampen Gen. Douglas Haig’s enthusiasm for the new weapon. He ordered the construction of 1,000 more. By 1918, the British had produced around 2,800 tanks.

The French, meanwhile, built 4,000 tanks of their own, and used them in an infantry-support role. They proved just as unreliable as the British models, although they achieved some success when used in mass attacks. The United States built 84 tanks, while Germany put a mere 20 tanks into the field during World War I.

At the end of the war, both the French and British seemed to lose their appetite for tanks and did little to advance the technology during the 1920s and ’30s. Across the Rhine, however, those who had been most affected by the new weapon began to study its potential use for the next big European war.

Photo: An early British Mark I tank, the C-15, sits beside a trench near Thiepval, Sept. 25, 1916. It’s fitted with a wire “grenade shield” and a steering tail, features that disappeared in the next models. (Lt. Ernest Brooks/Courtesy Imperial War Museum, London)

Read 2679 times
Published in News Technologique-Tech News
More in this category: « Africa's Past Landscapes Revealed in Historical Travel Accounts Confessions of an Eco-Terrorist Takes Whale Wars Up a Notch »
back to top