A new fossil crocodile species has turned up in the same Colombian coal mine as the world’s largest known snake. Sixty million years ago, the 20-foot freshwater crocodile shared the rivers of South America’s forests with the Titanoboa, a snake that could grow over 40 feet long, also extinct.

The crocodile described in Palaeontology Sept. 15, has a long, narrow snout full of sharp teeth. Paleontologists believe it hunted lungfish and bonefish relatives, making Acherontisuchus guajiraensis the first tropical New World land animal specialized to eat fish, both a competitor to the giant boa and possibly its prey. 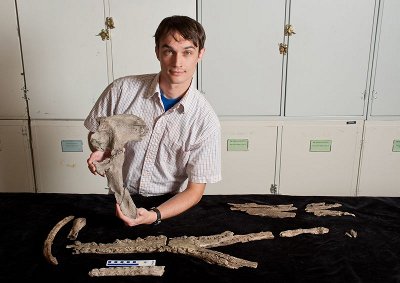 “The younger individuals were definitely not safe from Titanoboa, but the biggest of these species would have been a bit much for the 42-foot snake to handle,” author Alex Hastings, from the Florida Museum of Natural History, said in a press release Sept. 15.

The fossils uncovered in the Cerrejón coal mine reveal a time when Paleocene reptiles dominated the South American environment. The giant snakes, turtles and crocodiles lived in a warmer climate than today. A. guajiraensis is from a crocodile group, the dyrosaurids, that survived some ecological catastrophes, and went extinct in others.

“The same thing that snuffed out the dinosaurs killed off most of the crocodiles alive at the time,” Hastings said in a press release. “The dyrosaurids are one of the few groups to survive the extinction and later become more successful.”

Studying how these reptiles, whose genus name stems from the Greek mythological “river of woe,” responded to geological and climactic changes may help predict how modern reptiles will fare on a warming planet.

Read 3207 times
Published in News Technologique-Tech News
More in this category: « Trove of Dinosaur Feathers Found in Canadian Amber Review: Gears of War 3 Is a Triumphant Threequel »
back to top