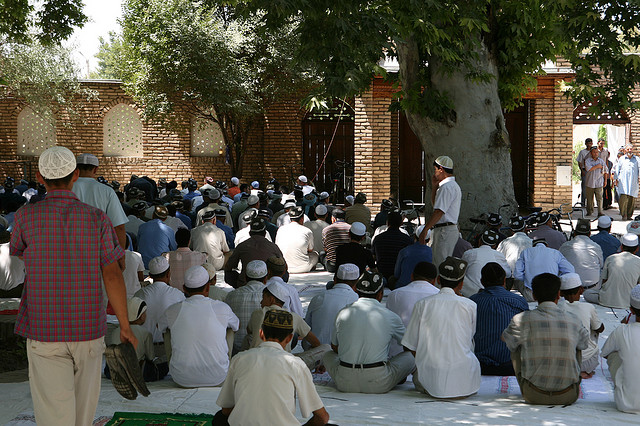 The FBI swears it has stopped teaching agents that “mainstream” Muslims are proto-terrorists and that Mohammed is a “cult leader.” But top Senators aren’t prepared to let the FBI turn the page on its anti-Islam counterterrorism training, revealed by Danger Room on Wednesday.

“There is no room in America for the lies, propagated by al-Qaida, that the U.S. is at war with Islam, or the lie propagated by others that all Muslims support terrorism,” Sen. Joe Lieberman, the chairman of the Senate Homeland Security and Government Affairs Committee, told Danger Room.

Lieberman is one of the most consistently hawkish members of Congress. Not coincidentally, he’s been disturbed at recent reports that “inaccurate or even bigoted” anti-Islamic sentiment — his words — is substituting for diligent, responsible counterterrorism. In a letter this week to John Brennan, the president’s assistant on homeland security, Lieberman called for “meaningful standards” on law enforcement counterterrorism training, a point he reiterated to Danger Room.

“Proper training about violent Islamist extremism is absolutely essential for our law enforcement personnel in order to empower them to identify and understand this grave threat, and then protect the American people from it,” Lieberman says. “Part of this training must be an understanding of the clear and profound difference between Islamist extremism, which is a totalitarian political ideology that is at war with us, and Islam, which is a religion practiced by more than a billion people around the world, including millions of law-abiding and loyal Americans.”

Nor is Lieberman the only senator with oversight responsibilities disturbed by the FBI training materials. “Patriotic Muslim Americans can be one of our nation’s best weapons against radical Islamic terrorists,” Sen. Ron Wyden, a member of the intelligence committee, told Danger Room. “Anyone who stigmatizes the entire Muslim American community will miss out on opportunities to work in partnership with that community to identify and take action against emerging terrorist threats before they can do harm to our country.”

A representative for Lieberman said the senator “looks forward to hearing from administration officials” about how these training materials came to be, a sentiment echoed by Wyden.

Wyden’s superior on the committee, chairwoman Dianne Feinstein, wasn’t as verbose. Her representative had no response. And that omerta was shared by the chairmen of the House’s counterterrorism oversight committees. A spokeswoman for Rep. Mike Rogers, the chairman of the House intelligence committee — and a former FBI agent himself — told Danger Room that there would be no comment.

The same went for Rep. Peter King, the New York Republican who chairs the House Homeland Security Committee. King has accused U.S. Muslims of insufficient cooperation with law enforcement and held controversial hearings earlier this year about radicalization in American Muslim communities. But King wouldn’t defend the FBI or William Gawthrop, the Bureau employee who lead the incendiary training sessions. King also declined to comment through a representative.

Gawthrop’s FBI training did attract a lot of attention on extremist Islamist message boards, however. The online jihadists claimed it as a vindication — essentially demonstrating Lieberman’s point. “Looks like years of sucking up to the authorities, throwing innocent Muslims under the bus and cooperating with the feds has done ‘American Muslims’ no good at all,” wrote one forum user, as spotted by jihadisphere analyst Jarret Brachman.

Representatives for U.S. Muslims expressed anger at the FBI. Not only were Gawthrop’s training materials offensive — they instructed agents that the real threat to the U.S. comes not from terrorists but from “a normal assertion of the orthodox [Muslim] ideology” — they exposed the FBI as deceitful.

“This is especially disturbing because we had been told directly by the administration and by the FBI, through the press, that these materials were no longer being used,” says Farhana Khera, the executive director of the San Francisco civil rights group Muslim Advocates. “It leaves us to question why the FBI refuses to be fully forthcoming about its training materials and why it continues to use bigoted, woefully misinformed ‘experts’ and materials to train law enforcement.”

Muslim Advocates has drafted a letter to the Justice Department inspector general (.pdf) demanding an inquiry into FBI counterterrorism training.

The FBI has been quick to distance itself from Gawthrop’s training. In a stock answer to reporters today, it said that Gawthrop “no longer provides training on behalf of the FBI”; that his briefings were “quickly discontinued”; and that “policy changes have been underway to better ensure that all training is consistent with FBI standards.”

But the bureau did not answer Danger Room’s questions about the pedagogical standards it used to construct these teaching materials. It did not tell us who hired Gawthrop to teach. It did not answer a direct question about what the counterterrorism value of these briefings is supposed to be.

And Gawthrop is still an FBI official — although he seems to have been put on a muzzle.

In mid-October, the International Counter-Terrorism Officers Association (ICTOA), an organization comprised of “law enforcement personnel, firefighters, military, first responders, private/corporate security, and other related professionals” will gather at the Flamingo Hotel in Las Vegas. One of the scheduled guest speakers at its 9th annual convention (.pdf) is none other than Gawthrop. He’s slated to present two lectures on October 20: “Strategic Themes & Drivers in Islamic Law” — perhaps the same briefing we’ve acquired — and “Influence of the Shariah on Law Enforcement Investigations.”

“We’re not trying to bash anybody,” Riker said.