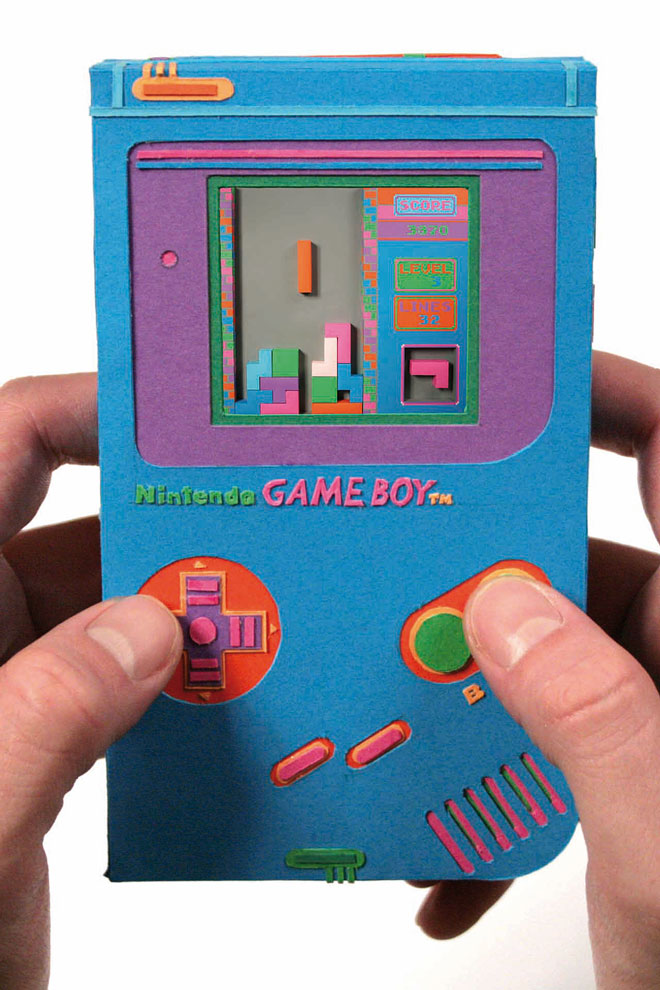 Designers Lucie Thomas and Thibault Zimmermann have painstakingly re-created a range of retro devices with meticulously sliced paper — including a Game Boy, a Polaroid camera and a Walkman.

The French duo behind design studio Zim and Zou has launched a nostalgia-inducing collection under the title Back to Basics. It took around a year to make all the pieces, with each pattern based on accurate measurements taken from the real objects.

The idea started because the artists used to play Tetris at the studio on a gray Game Boy. Zimmermann told Wired.co.uk: “We found the Game Boy to be old-school and contemporary at the same time.” In 2010, the pair created two Game Boys — one in original gray and one in 1980s brights. “After this, we decided to create a big collection of objects,” he said.

The duo first of all made a blueprint of the objects, taking the measurements from the real-world items or — if they weren’t available — researching the dimensions online. They cut out all the different pieces of paper using a Stanley knife and then stuck them all together with glue. In addition to the aforementioned objects, they also created a Leica camera, computer discs, cassette tapes and rolls of film.

Zimmermann told Wired.co.uk that they made these papercraft objects for several reasons. “At first, it’s a tribute to vintage technologies which marked the technological evolution of the ’80s and all the nostalgia of the memories that everyone has with them. By bringing these ‘dead’ objects back to life, we tried to highlight the very fast evolution of our everyday possessions — the devices we use nowadays will in a few years be considered relics too.”

He added: “When today you can read a book on a screen, we needed to create ‘real things.’ The aspect of craftsmanship is really important for us. We wanted to turn an industrial object into a unique handmade craft. And the fact that the objects are not working places the user into a spectator position, a way to see the object out of its function.”

Check out Wired UK’s gallery of Zim and Zou’s creations and watch the process in the video below.