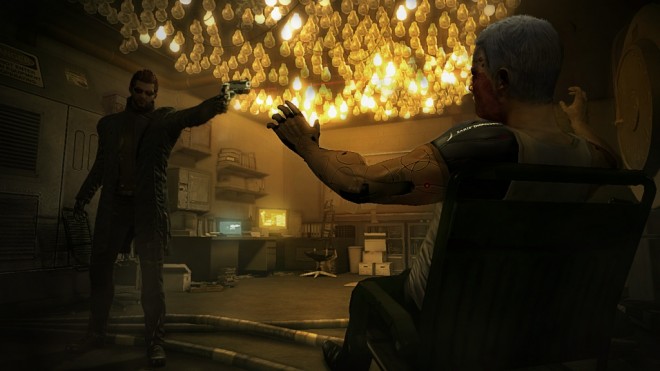 There’s a certain rhythm to every action you take in Deus Ex: Human Revolution. Whether you’re gliding along a wall to avoid enemy eyes or capturing electronic nodes to hack a security terminal, every step has its own cadence, like the whole game is one big orchestra and you’re conducting the beat. It is an undeniably gratifying experience.

Then there is the narrative, which is the Human Revolution equivalent of a stray drum pounding one split-second slower than every other instrument in the chorus. It comes very close to ruining the whole thing. This is because Deus Ex: Human Revolution’s story — a grandiose tale stuffed to the brim with mythological references, hefty moral questions and dystopian predictions — is not very good at making you care about it.

Deus Ex: Human Revolution, which publisher Square Enix released for Xbox 360, PlayStation 3 and PC this August, spends so much time talking about the nature of humankind that it forgets to show us what makes humankind so great: our relationships with one another.

Human Revolution is set in a world where people can do extraordinary things, like heal mortal wounds and put a stop to global warming, but they just can’t seem to figure out how to be people.

It all starts with Adam Jensen, Human Revolution’s gruff protagonist. Jensen, a security guard for research corporation Sarif Industries, is left half-dead after a team of mercenaries raids the company’s laboratory and nearly cracks his body into pieces. Fortunately, Sarif Industries makes augmentations — cybernetic enhancements designed to improve human functions — that can save Jensen’s life. Which they apply to his body. Gratuitously.

From here on out, interactions between Jensen and the people around him are as hollow as the bullets he uses to rip them apart. He delivers the same monotonous vocals when he yells at strangers as he does when his best friend gets gunned down by mercenaries. Conversations are limited to Matrix-like psychobabble that puts more stock into sounding badass than evoking any sort of emotional reaction.

In many ways, Jensen’s actions are shaped by your own, which might be Deus Ex: Human Revolution’s biggest problem. You can choose who to kill, how to talk and even the game’s entire ending — but your choices never affect Jensen’s personality. The game’s plot points and prerendered cut-scenes do not change based on your decisions. Jensen will still continue to work for David Sarif no matter how many of the CEO’s lies he unravels. Jensen will still fight to save humanity no matter how many civilians he has slaughtered.

Perhaps this was an intentional move by developer Eidos Montreal. One of the game’s underlying themes is the question of whether an augmented human being loses part of his humanity, and at times Jensen seems like nothing more than a sentient robot that the player controls. But why should we care about somebody who seems to care about nothing? Even when Jensen discovers that ex-lover Megan, once thought dead, is alive and working against him, he maintains the emotional range of a toaster oven, grunting out a few platitudes and then ordering her to escape.

He’s like that with everybody. The twisted father-son relationship between Jensen and Sarif is barely explored. The attempted buddy-cop dynamic between Jensen and pilot Faridah Malik is all function, no substance. The only thing anybody ever talks about is what they plan to do next. It’s only fitting that the game ends without resolving any of these relationships.

Screenwriter and teacher Blake Snyder, in his book Save the Cat!, writes about the things that films can do to make us care about our heroes. We can relate to the main protagonist, he writes, if that protagonist shows his humanity by doing something noble, like stopping to save a cat from a tree.

If Adam Jensen saw a cat in a tree, he’d stop and ask it how to get to the next mission.

One of Human Revolution’s biggest strengths is its orange-hued world, which is chock-full of little plot lines and secrets to discover. You can spend hours hacking into peoples’ computers and reading their notes, discovering the tiny messages and subtleties in every e-mail. Like the explorer-driven Fallout series, Human Revolution’s most rewarding bits of narrative are the ones you discover for yourself.

It is perhaps testament to the nature of videogame storytelling that these little slices of life overshadow the main story, showing us more about human nature than any of the game’s drawn-out monologues or image slideshows. Reading about office backstabbing and practical jokes is far more engaging than talking to anybody in Human Revolution, and I often wondered who was writing these e-mails, as nobody in the game ever shows as much personality face-to-face as they do in text.

These e-mails become a problem, however, when you wind up learning things that the game hasn’t yet decided you should learn. For example, you can hack into an office computer in the headquarters of Sarif Industries and learn in an e-mail that Megan might still be alive. Some time later, when Jensen “officially” finds out that Megan might still be alive, he is utterly shocked no matter how many times you’ve read that message.

You, the player, wind up harboring information that your character doesn’t have, which makes no sense, as you are supposedly inhabiting his eyes.

Something similar happens during a section close to the end of the game, when you can listen in on a conversation between two soldiers as they casually mention their boss, Mr. Darrow. This should shock Jensen, as he has no idea that industrialist Hugh Darrow is running the factory, but he hasn’t reached that cut-scene yet. And he is shocked when he reaches it. Maybe he just has selective hearing?

There are two possible solutions to this issue. One is to avoid this kind of storytelling entirely: Keep things linear and don’t open any doors for anachronistic discoveries. The other is to create enough scripted contingencies that the game knows how much information you have and acts accordingly, tempering Jensen’s reactions based on your knowledge. However, this would be a Sisyphean task for even the most adept development team, costing more time and money than is typically allotted to any game.

Or maybe Deus Ex: Human Revolution shouldn’t have had any sort of main storyline at all. I would have been content to spend hours and hours exploring the game’s dystopian landscapes and sneaking through its decayed buildings. Though its themes are certainly interesting to think about, Human Revolution didn’t really need much of a plot. Its strength lies in its world, its mechanics, its little hidden secrets and Easter eggs.

It’s unfair to say that one bad drumbeat ruins the whole orchestra. Human Revolution’s ludic strengths heavily outweigh its narrative failures, and playing the game is never not thrilling. But with fewer instruments, Deus Ex: Human Revolution might have been far more harmonious.

Read 12471 times
Published in News Technologique-Tech News
More in this category: « Sept. 19, 1982: Can't You Take a Joke? :-) Massive Biometric Project Gives Millions of Indians an ID »
back to top