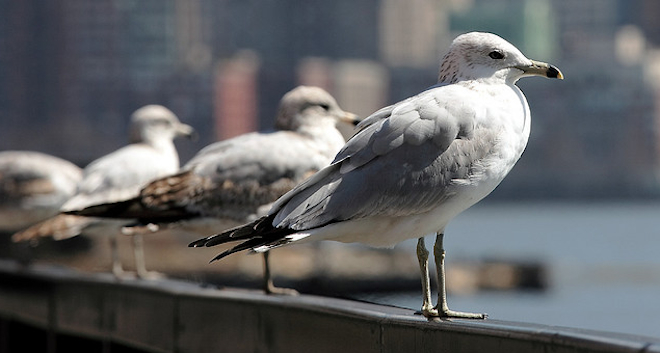 Resistance factors — the mutations that allow bacteria to defend themselves against the attack of antibiotics — spread around the world in unpredictable patterns with remarkable speed. How do they do that?

A team of researchers suggested Saturday that seagulls might be to blame.

At the annual ICAAC meeting in Chicago, the largest infectious-disease conference in the United States, Dr. Patrice Nordmann of the Hopital de Bicetre near Paris disclosed results of a small study that looked for resistant bacteria in the feces of seagulls landing on Miami Beach in Florida. During April 2010, they collected 52 stool samples and found within them 83 isolates of gut bacteria such as E. coli.

Seven of the E. coli carried genes that direct production of CTX-M enzymes, a troublesome resistance factor that protects bacteria from the very broad category of drugs called extended-spectrum beta-lactams (ESBL), and that has recently spread worldwide. In addition, 14 of the E. coli were also carrying the gene for the CMY-2 enzyme, which confers the same ESBL resistance on Salmonella. Nine of the isolates were multi-drug resistant.

“Our opinion is that seagulls could be an important vector of multi-drug resistant bacteria,” Nordmann said in a press briefing on the first day of the giant meeting. “These birds fly 200, 300, 1,000 kilometers. We think this is a worldwide phenomenon.”

The finding is important, he said, because the resistance factors identified in the seagull feces match ones that cause highly resistant infections in humans — not only in hospitals, but in everyday life, where the route of infection is often unclear.

This is actually not the first time that someone has traced a link between antibiotic-resistant bacteria and beaches, beach birds and water.

Swedish researchers found resistance to multiple antibiotics in Arctic bird droppings that they collected in 2008 in Siberia, Alaska and Greenland, and in 2010 in Russia.

And the Swedish team and French researchers found ESBL E. coli in 2009 in gulls in the south of France.

(The association between coastal environments isn’t limited to E. coli: Researchers have also found MRSA, multi-drug resistant staph, in beaches in the Pacific Northwest and California.)

Where are the resistant bacteria coming from? Nordmann cautioned Saturday that E. coli, including resistant E. coli, are widely distributed in the environment thanks to their carriage in the guts of humans and animals; a bird could pick it up simply by drinking contaminated water, he said, while also noting that seagulls are scavengers that pick through garbage.

Deep in the medical literature, there’s another suggestion. In 2005, researchers from the CDC, FDA and University of North Carolina-Chapel Hill found antibiotic-resistant bacteria in the feces of Canada geese living on bodies of water in North Carolina and Georgia. The geese’s carriage of resistant bacteria wasn’t uniform, however. The resistant bacteria appeared only in geese that were living in waters that were close to large-scale swine farms. The resistance patterns in those bacteria matched ones that had already been recorded by federal health agencies in pigs being routinely fed antibiotics in industrial-model agriculture. The geese “could serve to disperse bacteria between widely separated locations,” the researchers concluded.

Here’s some video from the conference of Nordmann talking about the paper.