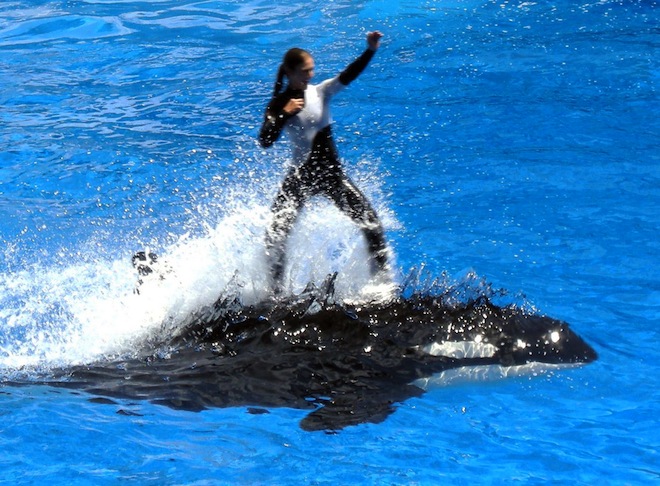 On Sept. 19, a federal hearings began on the safety of keeping killer whales in captivity. Convened by the Occupational Health and Safety Administration in the aftermath of two fatal attacks on trainers, the hearings won’t consider the safety of killer whales — but according to former SeaWorld trainer Jeff Ventre, the two issues are inseparable.

An animal-loving Florida kid who majored in biology and rose to trainer stardom in Shamu Stadium before being fired, Ventre says the attacks that killed Dawn Brancheau at SeaWorld and Alexis Martinez at Loro Parque are manifestations of stress, even madness, in animals forced into miserable, unnatural conditions.

“Killer whales don’t attack humans in the wild,” said Ventre. “What we’ve seen in these injuries to people is a direct byproduct of the stress associated with captivity.”

Ventre was fired in 1995. SeaWorld says it was for being careless; Ventre says it’s because he’d become critical of the industry. Wired recently talked to Ventre, who has since become a medical doctor and cetacean advocate, about his work.

Wired: When did your feelings about keeping killer whales in captivity begin to change?

Jeff Ventre: When I started, I was just happy to have the job. It was amazing to see dolphins and sea lions and killer whales, despite the fact that they were in captivity. I thought there was going to be a lot of science, too. I’d grown up with Jacques Cousteau programming. Over time I found out there wasn’t much science going on. It was just a different version of the circus. Over time, that wears on you.

I did two different tours of duty at Shamu Stadium. The first time I was there, I was an apprentice. I did a lot of bucket-scrubbing, blue-collar type work, and had only a little water experience. Then I went around to the other stadiums, where they had dolphins, belugas and false killer whales, and honed my waterwork abilities. Then I was brought back to Shamu Stadium in 1994, where I spent my last two years. It was that second tour of duty that was somewhat enlightening.

By that time I’d learned enough about killer whales that I began to realize that what we were telling students coming in for education shows was at odds with what was true.

Wired: Give me an example.

Ventre: We were telling people that the animals lived to maybe 20 years old. But in reality, I knew that females lived to be 50, and males to be 30. That was a red flag. I also began to realize that all the killer whales in captivity had broken teeth. That seemed odd to me, because we were feeding them dead fish.

This knocks off the enamel and exposes the pulp of the tooth. This fleshy pulp is then drilled out by a veterinarian. What you have is a hollow tooth, creating a corridor down into the jaw itself. So for the rest of that animal’s life, they need to get their teeth flushed two or three times a day. In humans, it’s known that poor dentition leads to heart disease, kidney disease and stroke. These orcas are essentially left with a diseased mouth.

Wired: What are other ways in which killer whales are poorly suited for captivity?

Ventre: In the wild, they typically swim 80 to 100 miles a day, primarily in a straight line. This helps sculpt a straight dorsal fin. In captivity, because the pools are so small, and the killer whales tend to swim in a counterclockwise pattern, it creates an asymmetrical force. You get dorsal fin collapse. In captivity, 100 percent of all male dorsal fins are collapsed, and most of the females, too. In the wild, it has a prevalence of less than 1 percent and it’s associated with pathology.

Wired: What does it actually do to them?

Ventre: It’s not clear, but it’s a byproduct of captivity. And when we look at all the killer whales that have lived and died in captivity, their average life expectancy, once they enter that environment, is 6.6 years. If you add all the living killer whales — there are 42 in captivity now, including six who’ve made it to over 30 years old — it only pushes the average life expectancy to 8.5 years. And what John Jett and I tried to get across in our report is that, since the advent of captive breeding, things haven’t gotten better. Modern methods haven’t improved the situation.

Wired.com: Though killer whales are now bred in captivity, a few — like Lolita, captured in 1970 in Puget Sound, and Tillikum, the orca that killed Dawn Brancheau — are old enough to have been caught in the wild. What would that have been like for them?

Ventre: Extremely traumatic. Those trappers were using seal bombs to drive these animals into cove-like areas. They had boats that ran nets behind them, trapping them. Then they got these giant lasso-like devices around the torsos of the animals, and used manpower to separate the mothers from babies. That’s how they got the first collection for SeaWorld.

Wired: Is it still going on in the wild?

Ventre: It’s suspected, but there’s no way to prove it. There’s a lot of hearsay and rumors. I believe there are potentially orca collections going on in China and Russia.

Wired: At least the captive-born killer whales aren’t going through that.

Ventre: They won’t have experienced that traumatic event, but there’s no evidence that orcas born in captivity live equivalent lives. They die much earlier.

The goals of marine parks are different from the goals of wild whales. SeaWorld is trying to fill its pools. Sumar was taken away from his mother before he was one year old, because Taima was such a terrible mother — and one reason for that might have been that she started popping out kids at a very young age, and was never trained to be a good mother. In the wild, mother orcas have their first calves around the age of 14 and have one every 5 years; Taima had her first calf at age 9, and was pumping out one about every three years.

Wired: And Taima was born to two killer whales caught in the wild. So even the killer whales born in captivity are descended from an original population that’s been broken and perhaps driven mad.

Wired: You believe that attacks on trainers, such as Tillikum on Dawn Brancheau and Keto on Alex Martinez — and other incidents that haven’t received so much attention, or didn’t end in death — are the animals acting out their stress.

Wired: Is there a way to make captivity ethical and safe for killer whales?

Ventre: No. It’s just a function of their size. All killer whales in the wild are essentially athletes. Their home is their pod. When you extract them from the ocean, where they swim 100 miles a day, and drop them into a fishtank, you’re taking away their ability to exercise. You’re taking away their food choices. Most of them are living in northern altitudes, up in Oregon or British Columbia or Alaska or the Arctic, and you’re asking them to live in Florida. They’re breaking their teeth and eating carrion.

Wired: Is there any way to make the captive situation safe for people?

Ventre: Ultimately the safest choice is to not get in the water with killer whales. As we’ve just seen in the press, the individual killer whale profiles that SeaWorld released indicate that aggression is common with all the animals, not just Tillikum. You can go along for many years without having an injury or death, but at some point, because these are free-thinking creatures, there’s no way to control them when they act out.

Wired: Why have you only spoken out recently? If you feel so deeply about it, why didn’t you speak out when you were a trainer?

Ventre: I think my opinions are what got me terminated from SeaWorld. I was questioning the system from within. This isn’t anything new for me. It’s only become an issue because Dawn Brancheau was killed.

Image: A show at SeaWorld. (Milan Boers/Flickr) Video: Footage of three killer whales being captured in Puget Sound in 1971. Two went to the original SeaWorld in California. (Shalesta/YouTube)