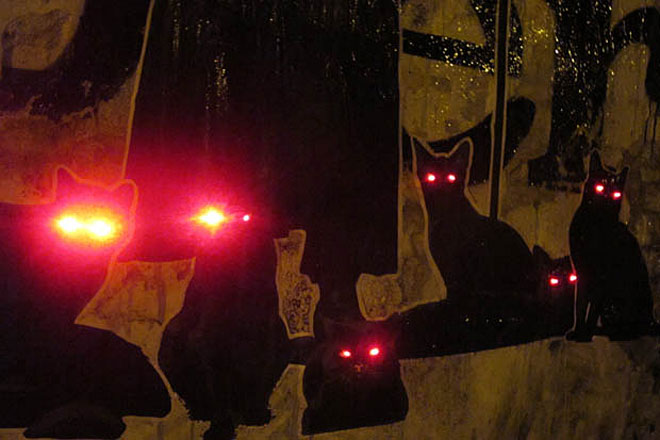 Art collective Ojo Señor is daubing the darkened corners of Barcelona with street artworks that feature cats and children with menacing LED eyes.

The posters feature 10 mm color LEDs — in either red, blue or white — which are powered by 3-volt batteries placed behind the paper.

The collective first had the idea one night when they saw a cat staring at them with shiny eyes. One of the collective (who wanted to remain anonymous) told Wired.co.uk: “It was quite disturbing, so we thought it would be nice to recreate it in dark points of the city. We knew some LED street art [such as works by Luzinterruptus, another Barcelona-based art collective], so we thought it would be amazing to add LEDs to pictures of cats so the effect would be complete.”

Soon after, they thought about the chilling children from the film Village of the Damned, whose eyes glow every time they use their special power to control people’s minds. “We found the idea of little kids controlling your mind in the middle of the night very powerful, so we took that idea for our first series of posters and that became our signature,” they said.

They also worked on a series of posters exploring Edgar Allan Poe’s short story “The Black Cat.” They were inspired by the quote: “Upon its head, with red extended mouth and solitary eye of fire, sat the hideous beast whose craft had seduced me into murder, and whose informing voice had consigned me to the hangman.”

The batteries on the posters last around a month, but the LEDs are often removed. The Ojo Señor team likes to think that “the children use them to do bad things with their powers.”

Check out Wired UK’s eerie gallery of photos, and follow the collective’s work on their blog.

Read 2802 times
Published in News Technologique-Tech News
More in this category: « DigiNotar Files for Bankruptcy in Wake of Devastating Hack Book Excerpt: The Dyslexic Advantage »
back to top