The Power of a Supernova 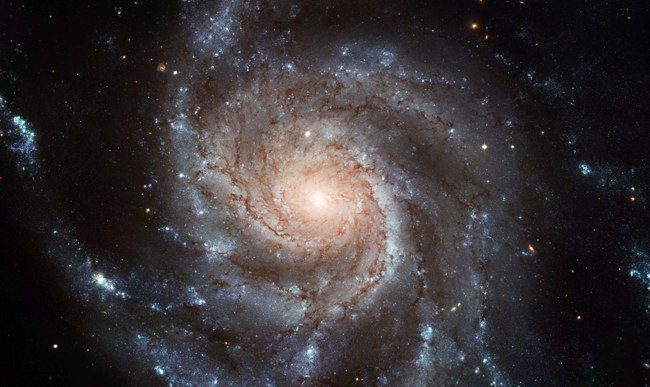 Image via ESA and NASA

I keep trying to see this supernova in the Pinwheel Galaxy. The darn moon is just too bright. Ethan at Starts With a Bang suggests waiting a week or so. I will try that.

But what I find really cool about this supernova – it is possible to actually see the thing. This object is in the Pinwheel Galaxy, which puts it at around 39 million light years away. That is far. Far, far away.

Luminosity and Brightness of the Sun

What is luminosity? This is the rate at which the object produces radiation energy (here I will just consider the energy in the visible spectrum of light). The luminosity of an object is measured in watts. For example, if a lightbulb produced 10 watts of visible light, it would have a luminosity of 10 watts. The Sun has a luminosity of about 3.86 x 1026 watts.

Brightness is how much energy per second arrives at a location per square meter. Take a small flashlight lightbulb. If you hold it close to your eye, it appears much brighter than if it were farther away. Why? If we assume that the light from the bulb expands equally in all directions, the further you get from that bulb the larger the total area over which that light is spread.

Since the surface area of a sphere (assuming the light propagates spherically) is 4?r2, I can find the brightness (I) in terms of the luminosity (L) and the distance from the source (d):

From this, you can see the brightness (also called the intensity) is measured in watts/m2.

What if I have another object and I want to compare its luminosity to that of the Sun? If I know the brightness of the object, then I can write:

Notice that the 4? cancels. But there is a problem. The problem is that I know the apparent magnitude of the supernova and not the intensity.

What is Apparent Magnitude?

Long ago (in this galaxy), the Greeks classified the visible stars into 5 groups. Group 1 were the brightest stars and group 6 were the dimmest. Today, we call this the apparent magnitude, and it is a measure of how bright something appears to be. Well, it turns out the human eye doesn’t interpret brightness on a linear scale. For each jump in magnitude number, the brightness decreases by a factor of 2.512. If I have two stars, then I can say:

Here m1 and m2 are the magnitudes of the two objects.

According to Universe Today, this particular supernova (called Messier 101 supernova) has a magnitude of 10. Now, I just need to compare this to another star. In order to use the Sun as a comparison, I need to know its magnitude. The absolute magnitude of the Sun is 4.83. What is the difference between apparent and absolute magnitude? Absolute magnitude is the magnitude the object would have if it were a distance of 10 parsecs from the Earth. For now, let me just say parsecs is a unit of distance where 1 parsec = 3.26 lightyears = 3.08 x 1016 meters.

In order to use the above expression, I need to first find the brightness of the sun if it were at 10 parsecs. Since I know the luminosity, I can find the intensity:

Now I can calculate the brightness of the supernova:

And from the brightness, I can find the luminosity:

And here is the reason. You can see this supernova because it is 10 billion (short scale billion) times more luminous than the Sun – just in the visible spectrum. But why did this take so much work? First, because I am not used to dealing with values in terms of magnitude. Second, to use magnitude, you have to convert to real things first.

Read 3160 times
Published in News Technologique-Tech News
More in this category: « Study Breaks Down How Your Mileage May Vary System Builder Marathon, Sept. 2011: $1000 Enthusiast PC »
back to top