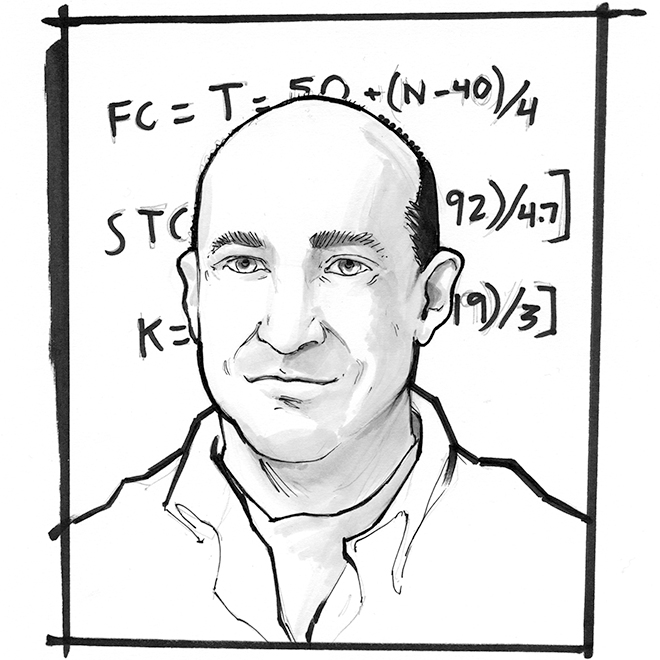 Physicist David Saltzberg checks all the science on The Big Bang Theory, even the equations on the whiteboards.
Illustration: Simon Lutrin/Wired.com

In the world of TV fact-checkers, David Saltzberg is probably the most well-known. And with good reason — he’s a rock star.

Now working on his fifth season as the science consultant for The Big Bang Theory, Saltzberg is the master physicist who ensures all the science dropped in the show holds water, right down to the equations on the whiteboards.

But he’s a rock star because Big Bang Theory is the least-impressive thing on his resume. Saltzberg, 44, has a bachelor’s in physics from Princeton University, where he worked on the Cyclotron. He has a Ph.D. in physics from the University of Chicago and did his post-doc at CERN, the European nuclear research center. These days, when he’s not reading show scripts, he teaches a full course load at UCLA. In his free time he flies scientific balloons in Antarctica and uses hiatuses from the show to hop over to Switzerland to work on the Large Hadron Collider.

Even though he could fact-check most of the science in the show with one eye closed, there are some things he still needs help with on The Big Bang Theory, whose main characters are Cal-Tech physicists.

“Luckily, just as they added more neuroscience and biology with the character Amy Farrah Fowler, the actress that plays her is Mayim Bialik and she has a Ph.D. in neuroscience,” Saltzberg told Wired.com. “So she has my back on the biology.”

Check out Saltzberg’s TV Fact-Checker bio below to get a taste of how he weeds out bad science, why he never got into comedy, and the one error he still feels bad about. (You can also follow Saltzberg’s fact-checking on his blog, The Big Blog Theory).

Bona fides: Bachelor’s degree in physics from Princeton. PhD in physics from the University of Chicago. Post-doc at CERN. Currently a professor of physics at UCLA. Has seen the Large Hadron Collider up close and personal.

How did you wind up on The Big Bang Theory?

“I never had any connection to Hollywood at all, which is a funny thing living in L.A., because you can go to a random party with friends and so many people work in the entertainment industry. But I never had any of that because I was at UCLA. Another astrophysicist I work with on the balloon project in Antarctica consulted on the first pilot, the one that was never shown. He lived in Hawaii and he couldn’t consult very easily and he asked if I was interested in helping the writers out. So during the process of that first pilot I got involved.”

What’s your process when consulting on The Big Bang Theory?

‘Sometimes they’ll just say “science to come” in brackets in the script.’

“Basically as soon as the writers release any fragment of a script to the rest of the crew I get a copy. Sometimes I’ll get six pages of a new script. These writers know a lot of science. Sometimes they’ll have a whole piece of science dialog that they’ve come up with and I just have to check it. For example, the script I’m reading right now I changed one letter. They had mentioned an ‘anti-photon’ but that doesn’t make any sense because there is no such thing. So I suggested changing it to ‘anti-proton.’ The writers, I understand, want the sound and the rhythm to be the same, so if I change something like that I like it to be still correct but not change the pattern. Sometimes they’ll just say ’science to come’ in brackets in the script — like they want characters to be working on an experiment and they need some words.” 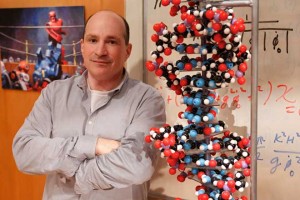 Are you on-set when the show is filmed? Do you advise or interact with actors?

“I go to pretty much all of the tapings. Usually they don’t need me much at the tapings because pretty much everything is set in stone. Sometimes they’ll change something on the fly — then I can help out, but that’s rare. Sometimes if an episode has a lot of science in it, then I will come to a rehearsal. Especially if, for example, it has them writing something on a whiteboard.”

What’s your process on any given episode?

“In general they’ll say, ‘We’re thinking of a certain kind of episode…. We’re thinking of sending the guys to the Antarctic. Can you think of what kind of experiment they might be working on?’ Then I’ll think for a couple days or a week and send them suggestions as they come up. When I get a normal script I basically just open another editing session next to it and as I’m reading it I put down my thoughts or changes. I usually give them a few options. Then I send the whole thing over to them. I try to figure out [what they want], but I can’t really tell. I understand about as much of that as if a writer walked into our lab here.”

Name one thing in the season premiere that you had to check. Did you catch any errors?

“The writers wanted for some time for the whiteboards to be a problem that the guys were working on. And I hadn’t really done that because it’s hard to think about a problem that would work that wasn’t already solved. Or if it’s so hard, how am I going to solve it? But over the summer I got interested in a particle called the axion and a new way to find it. So I was working on that problem week by week and I had my notes and at one point it was looking really promising and then later it really got mashed. [Laughs] So the first episode is going to have the start of that calculation. It’ll be a multi-episode arc of that…. But in the second episode, they were working with a piece of equipment in Howard’s [played by Simon Helberg] lab and they actually came up with the name of the equipment and everything. They had the word ‘hydrostatic’ when they meant ‘hydraulic.’ It’s very funny what they do. They go to Howard’s lab and they use a hydraulic device in a way you wouldn’t normally use it.”

What’s the biggest goof/error you’ve ever caught when reading a script or working on an episode?

“The most amusing one was when Sheldon and Leonard’s mother were working on a scientific problem called quantum brain dynamics theory…. This theory is about how quantum mechanics is important for consciousness in the brain. It’s a highly disputed theory. But I realized there was nothing we could do because it was so built into the script. I mentioned, ‘There’s probably nothing you can do but this is not a well-accepted theory.’ They fixed it by saying that they were working on disproving quantum brain dynamics theory. They were able to solve it with one word.”

Has there ever been a goof that made it to air that you wished you’d caught?

‘I eventually realized I was that guy at a cocktail party who was trying to tell me his new theory of gravity.’

“They mentioned work by a scientist named Dolbear. He’s the physicist who figured out the rate of crickets chirping to temperature. We got his first name wrong. They said Emile Dolbear instead of A.E. Dolbear. I noticed it later. I got an e-mail from the great-grandson of A.E. Dolbear mentioning that we got the name wrong. He’s a chemist in Arizona and I invited him to a taping, and I think he felt better after that.”

Do you ever try to pitch plot ideas or jokes? If so, how much luck have you had?

“I tried and I had no luck. Comedy is a science and a field unto itself. I quickly understood that I was just not qualified and they were very patient with me, and very kind. But I eventually realized I was that guy at a cocktail party who was trying to tell me his new theory of gravity.”