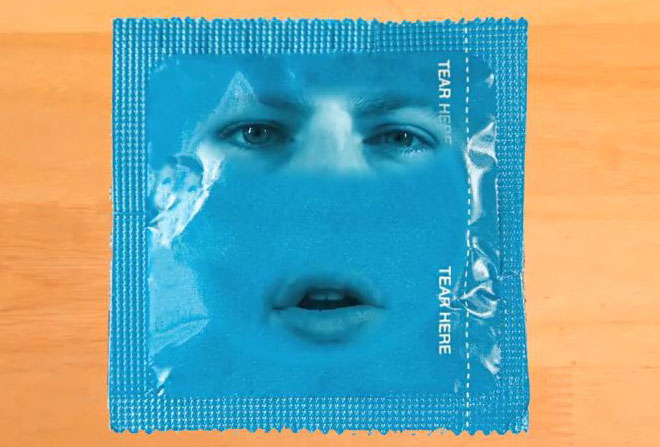 A talking condom dispenses sex-ed wisdom in a PSA by The National Campaign to Prevent Teen and Unplanned Pregnancy.
Screengrab: Wired.com

Professor Peter McGraw and writer Joel Warner have teamed up to explore the science of humor on a global expedition. The Humor Code chronicles their adventures, scientific experiments and unintentional comedy along the way. Learn more about McGraw, Warner and their escapades at HumorCode.com.

WASHINGTON — The National Campaign to Prevent Teen and Unplanned Pregnancy has a problem: Seven out of 10 pregnancies among unmarried 18-to-29-year-olds in this country are unplanned.

The organization also has an unusual potential solution: comedy.

Unlike the organization’s work with teens, the goal is not to get the individuals in the young-adult demographic to abstain from sex. It’s about helping them understand and use birth control. Whereas 18-to-29-year-old women receive various messages in this regard, men in this age group remain largely ignored.

How should the nonprofit reach this jaded and media-saturated male population? Could funny online public service announcements do the trick, or do birth-control messages mixed with dick jokes do more harm than good? To find out, the National Campaign invited us to Washington, D.C. to investigate the interplay between comedy and condoms.

“We’re trying to do sex-ed for people having sex,” said Lawrence Swiader, the National Campaign’s director of digital media, when we arrived. “Part of the problem is these people think they know it all, but when we probe, we find that they don’t.”

It’s why Swiader and the National Campaign have been pushing the envelope with their digital media campaigns, from YouTube videos of talking condoms to Andy Samberg-inspired hip-hop songs and cartoons of Coca-Cola douches.

One of the latest spots, “Sex PSA Gets Real” (above), features a spokesman who completely loses it in the middle of spouting somber statistics about birth control use among young adults. Such spots, which promote educational websites like Bedsider, SexReally and HaveSexStandingUp.com, are a refreshing departure from those cringe-worthy sex-ed videos from high school and have received more than a total million views. But are they getting the job done?

After all, while research has shown humorous ads can make products and concepts more attention-getting and memorable, using humor brings risks. Even if you find something funny, that doesn’t mean you feel good about the subject of the joke or the person telling it.

Take an experiment that Peter McGraw (co-author of this post) and Caleb Warren ran in The Humor Research Lab at the University of Colorado at Boulder. Participants viewed an actual lime-cola advertisement featuring an anthropomorphized lime peeing into a glass of soda. While participants found the ad pretty hilarious, they also experienced disgust and subsequently preferred tea, juice or water to a tasty glass of cola.

Although toilet humor is funny, it is not a good way to market a food or beverage.

The takeaway: Although toilet humor is funny, it is not a good way to market a food or beverage.

Not all funny is created equal, though. Psychologists are now divvying up comedy into different humor styles, and each style has different outcomes. For example, there is aggressive humor — sarcastic and disparaging put-downs and bullying that tends to assert the joke-teller’s dominance over his listeners.

Then there’s affiliative humor, the non-hostile brand of joking that builds bonds and goodwill. If a brand wants to make nice with its potential customers, it should be cautious when making fun of its customers, not to mention making fun of its own product. Hence the success of Apple’s “Mac versus PC” ads. The PC poindexter is always the butt of the joke, and everybody wants to hang with the cool-guy Mac.

In that regard, the angry-announcer PSA shown above might actually be turning away the audience it’s designed to reach, since it makes people who don’t use birth control the butt of the joke.

To figure out what humor style, if any, the National Campaign should be using for sex-ed web ads like this, we worked with John Roberts of Third Floor Productions and stand-up comedian Danny Rouhier to produce three new versions of that same PSA: A serious one that’s not funny at all (the “control” version) and two that employ affiliative humor, involving a gentler form of teasing focused on a crew member or the audience itself.

The Humor Research Lab is currently testing viewer responses to the ads and will have results in a few weeks. In the meantime, you can check out the new videos below. Did the National Campaign get it right the first time, or will one of these new approaches be more successful at getting people to rock a love glove? Watch the videos, vote in the poll and share your insights in the comments section below.