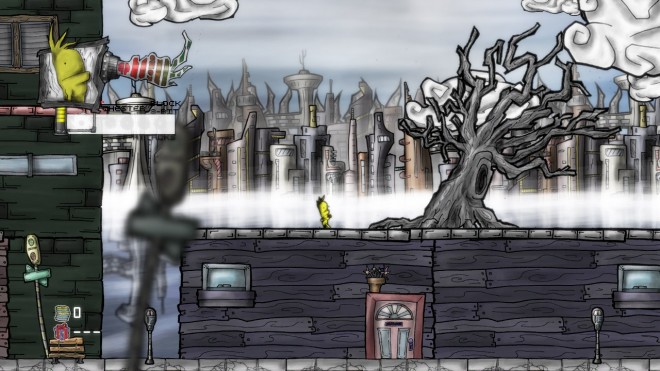 You can select from a number of background styles for each level in Chester.
Image courtesy Brilliant Blue-G

Want to be a game designer? Start doodling in class.

That’s how Benjamin Friedrich came up with the designs for Chester, a stylish platformer he released for the Xbox 360 Indie Marketplace several weeks ago. It’s a gorgeous, clever game filled with bizarre characters and level designs — the type of experience you’ll want to play through just to see everything.

Art is the main source of fuel for Chester, which features an array of different styles for each of its levels. With one push of a button you can switch up the scenery, turning your current stage into a chiaroscuro painting or a Warner Bros.-style cartoon. As you progress through the game, you can pick up different types of aesthetics and styles to add to your collection. Though some are more visually appealing than others, the sheer number of choices is stunning.

“Almost all of the art in the game was designed while I probably should have been instead paying attention in one class or another,” Friedrich said in an e-mail to Wired.com. “So I suppose the moral of the story is [that] doodling in notebooks during all of your classes pays off.”

Chester started off as an art project. Friedrich, 23, was brainstorming characters for a short animation last year when he decided to throw them into an XNA-fueled gaming project just to see what would happen. As the project became larger — and his doodle pad grew fuller — Friedrich eventually decided he would turn his artwork into a full game.

While jumping from platform to platform and dodging pits and obstacles, you’ll have to fight off enemies. To do this, you can select from one of Chester’s strange characters, which can also be swapped at any time. The cast includes a mime, a spaceship and a character that looks remarkably like Nintendo’s classic Mr. Game and Watch. Each of these characters possesses special abilities and attacks, which can be leveled up as you progress.

It’s tough not to get a kick out of Friedrich’s snarky sense of humor.

It’s tough not to get a kick out of Friedrich’s snarky sense of humor, bits of which are infused throughout Chester.

Though critics and fans have responded well to the game — it was even named part of the annual Summer Indie Uprising collection — Friedrich says sales have been subpar.

“The numbers for Chester have been far below even my lowest expectations,” he said.

This isn’t an unusual occurrence: Indie developers have typically struggled on the Xbox 360 and seen far better sales on the PC platform. Friedrich is counting on this trend for his next project, a PC adaptation of Chester he’s hoping to launch on Steam in the next few months.

Read 4262 times
Published in News Technologique-Tech News
More in this category: « Samsung Goes 6 Gb/s: Is The 830-Series SSD King Of The Hill? Review: Moneyball Movie Unites Jocks and Nerds Through Math »
back to top