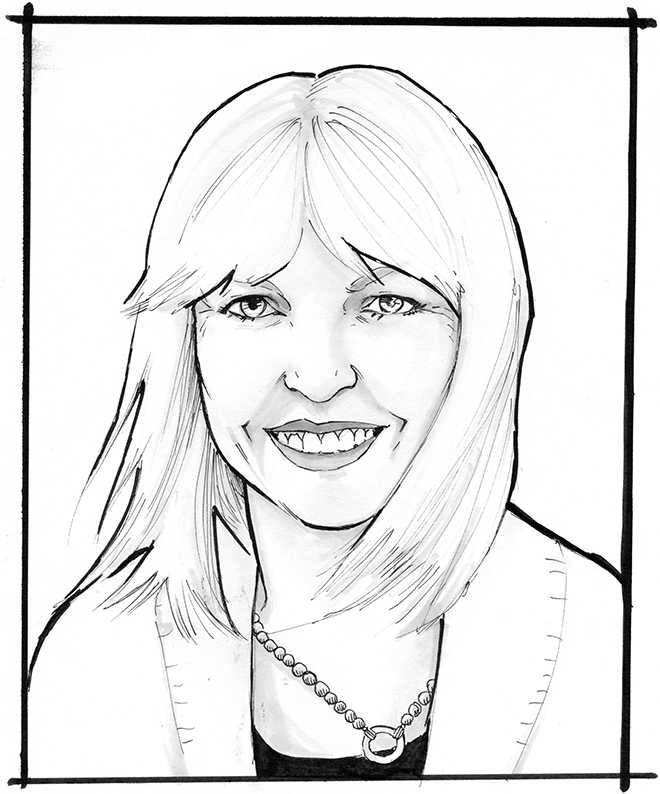 Long before Pan Am touched down on TV, people were comparing the show to AMC’s hit Mad Men. In a way they’re right: Set in the 1960s, both shows create lush television worlds based on the time period. And, importantly, both are intensely researched to achieve those effects.

But for Nancy Hult Ganis, the woman who makes it her business to keep Pan Am honest, there’s a big difference between her show and the bro-centric world of Sterling Cooper Draper Pryce.

“About five years ago it struck me that there were so few stories of young women who traveled together and became really good friends,” Ganis, one of the show’s executive producers, told Wired.com ahead of the show’s Sunday premiere. “My biggest frustration in our business is how uninformed people are about the world. I thought this would be a good vehicle for people to see our common humanity.”

So Ganis, a Pan American World Airways stewardess from 1968 to 1976, spent hours upon hours meticulously researching her former employer and getting jet-age stories from other past employees.

She ended up with tales of not only young women on far-flung journeys, but also of Pan Am’s involvement in State Department operations, behind-the-scenes missions prior to the Six-Day War and dangerous liaisons in Africa — all stories she hopes to work into future episodes.

Ganis, 63, admits much of the time she simply monitors her characters’ manners and behavior in scripts and on the set, keeping a careful eye on what they wear, how they speak and even whether they chew gum (they absolutely can’t).

“I’ve realized I had to not only have to give the information about what the airline was like and the storylines but also those minute details,” Ganis said. “I’m sure there are people who will catch things I didn’t catch in time.”

Check out Ganis’ TV Fact-Checker bio below to find out how she creates the more formal and friendlier skies of Pan Am’s 1960s.

Bona fides: Pan American World Airways flight attendant from 1968 to 1976. Went on to become a Hollywood producer (Akeelah and the Bee).

How much of Pan Am is based on your real experiences as a flight attendant?

“I really help the writers capture the essence of what Pan Am was. I gave them lots of stories and I brought together a lot of former Pan Am people to talk to them about their experiences. No one character is any one person, but there’s elements of our stories in the stories [on the show]. For example, the whole spy thing was very true, and most people don’t know about that. They don’t know about Pan Am’s secret missions and their kind of extension of the State Department. The airline had people in Pan Am who were actually connected to the CIA. It was so logical at that time. I think it probably started during World War II, or just before. There were places where the United States couldn’t get involved, but certainly Pan Am was flying there.”

How do you ensure the historical accuracy of the show?

“When I was in grad school at Berkeley, I wanted to do a documentary about the airline because it fascinated me. [Pan Am founder] Juan Trippe was very much the Steve Jobs of his day — he created commercial aviation. I was fascinated about this whole world he created. So I started doing my research then. There’s also this incredible network of former Pan Am employees because we all really loved the company. They have this philanthropic organization called World Wings International. So we still communicate and have reunions, so I was able to tap into that. I sent out a 20-page questionnaire to people of things I was interested in and what I wanted to do and why. I got a wonderful response. So from that I just tried to organize the material into different categories. I also went to the Pan Am Historical Foundation and to the University of Miami, where they have all the archives, and I dug through boxes and boxes. I read tons of books, even though a lot of things aren’t really documented because of the secret missions. I just heard that from individual people. When I would get different points of view, I’d keep asking until I got consensus on something. But there was an amazing consistency. I learned a lot in this process that I didn’t know.”

How do you translate that kind of information into something writers can use?

“I think the biggest challenge of doing this is that most of the writers were not even born when I was doing this. I think the hardest thing for younger writers to understand is how we spoke to each other back then — it was a lot more friendly. The speech and how one would carry themselves or the more polite and civil discourse and the courtesy — even if it was a façade — to educate a new generation about that has been the most difficult.”

Beyond the stories of Pan Am, do you also have to keep an eye on the look and feel of the time period?

“There have been a couple things where I’ve been off doing something and come back to see that a scene had been shot and I’d notice something that would never be there. They corrected it, but at one point they had these people in white jumpsuits because they’d seen photographs of people wearing them, but they had people wearing them in the terminal. I said, ‘Those are the guys that are out on the runway fueling the planes!’ One funny story: About a week ago, we were setting up a scene in Pan Am’s terminal at Idlewild, which became JFK Airport, and one of the prop-masters asked me what kind of cups people would use walking around to drink their coffee. I started to laugh and I said, ‘Nobody would ever drink anything in an open can or cup. It was considered completely gauche.’ And he said, ‘Gauche‘? I said, ‘The food courts and things like that just didn’t exist. You would either go into a VIP lounge or they would go to a restaurant and be served.’

‘Most of the writers were not even born when I was doing this.’

Is it even possible to get everything right? It is a television show, after all.

“Sometimes you have to cheat. But the idea is to capture the essence of what it was. For example, in the show you don’t see the six people that would normally be serving in a 707 because if you had that many people in the scene, it would be really crowded. Where we’re cheating is we have the crew staying together because you have to get to know these characters, when in fact [back then] you’d go out with a crew for 14 days and then never see each other again. But for the most part I think we’re doing pretty well.”

Do you also advise the actors?

“Absolutely, I do. You have to be a little bit graceful about it. I did have to tell a couple of the cast members, ‘No chewing gum.’ [Laughs] And also, just things like how to serve. These days it’s completely different than it was back then. An example is when someone wants their coffee refilled, a flight attendant will take it to the galley and refill it and decide how much cream and sugar to put in it. Back then you would come with a coffee pot in one hand and a small silver tray with cream and sugar in the other. You’d extend that tray for their cup and saucer, pull the tray back into the aisle, you would pour the coffee and hand it back to them. Then they would help themselves to how much sugar or cream they wanted. I had to explain that just today.”

Have you ever had to kill an idea the writers had because it simply wouldn’t have happened?

“There’s a scene in the pilot in the briefing office where the girls get weighed in. That’s a little bit of an exaggeration. On the whole, that process was much more discreet. If the grooming supervisors thought anything about your appearance was inappropriate, you would be called off to another room, it wouldn’t be right there in front of everybody. If they thought you were overweight or your shoes weren’t polished properly, it was handled with a little more diplomacy. But they did have weight checks and they did have very strict standards of grooming.”

Have you ever caught one of the actors doing something particularly funny or egregious in a scene?

“There was one, I caught it too late and I don’t know if they fixed it in the edit, but I said, ‘Oh my god, she just put the silverware into the oven!’ Most people would never catch that.”

Do you tend to offer the writers overall story ideas or specific plot points?

“I have given anecdotes that have ended up in the scripts. The only thing I could tell you at this point, because we don’t want to give away anything, is that the story with the carving fork, that was an incident that happened to me. I can’t tell you what happened, but it’s dramatic.”

Read 2614 times
Published in News Technologique-Tech News
More in this category: « TV Fact-Checker: A Former Stewardess On Pan Am's Friendlier Skies Megatherium Gets a New, Tiny Cousin »
back to top