Here’s how to do the math for Terra Nova.

Take Lost and subtract the wisecracking Hurley. Then replace genius composer Michael Giacchino’s freakazoid orchestrations with ponderous anthems, and swap in a normal nuclear family for stranded strangers. Next substitute stunning Australian waterfalls for Hawaiian rainforest and multiply by glimpses of flesh-ripping dinosaurs instead of a smoke monster.

The Steven Spielberg-produced show, debuting Monday, introduces a Charles Dickens-meets-Blade Runner vision of planet Earth some 138 years down the line from now. Chilly citizens clomp through streets and crowded monorails wearing “re-breather” masks to filter out pollution that has permanently blocked the sun. The two-hour premiere follows a family of five that flees this technocratic hellscape by teleporting themselves, through a government-sanctioned wormhole, 55 million years backward in time to prehistoric Earth.

Head of household Jim Shannon is played in stolid fashion by Jason O’Mara. Imprisoned after breaking the future world’s two-kids-per-family law, he busts out of jail to join his doctor wife, Elisabeth (Shelley Conn). Transported in a flash from the bleak, Metropolis-like city — where the sight of an actual orange triggers paroxysms of joy — mom, dad, rebellious teen son Josh (Landon Liboiron), 15-year-old daughter Maddy (Naomi Scott) and young Zoe (Alana Mansour) land in a verdant jungle and journey to an encampment populated by previous time-travelers. 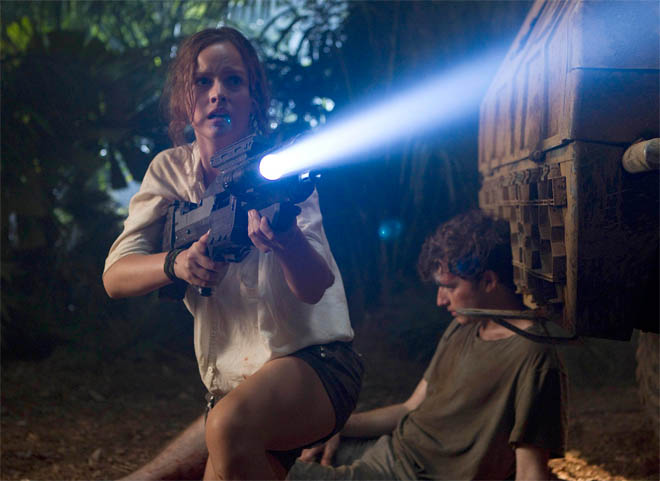 The distant past’s oxygen-rich atmosphere and real food prove too rich for most of the newcomers, but the Shannons settle into their new lives with minimal trauma. Mom works as a doctor, pulling football-size leeches off one of her patients while Mr. Shannon quickly graduates from gardener to cop. After Josh meets cute troublemaker Skye (Allison Miller), he ventures outside the gates to slurp moonshine and does battle with a herd of limb-devouring “Slashers.”

Also causing trouble are the a breakaway settlement of “Sixers.” Like the Others from Lost, these outsiders champion a conflicting agenda. However, grim leader Mira (Christine Adams) fails to match the spooky intensity Michael Emerson’ Ben Linus brought to Lost.

Filmed entirely in and around Queensland, Australia, Terra Nova’s exotic locale feels fresher than the familiar rebel-faction plots and routine father-son conflicts seen in so many other shows. Terra Nova instead distinguishes itself with a beautifully rendered bestiary crafted by visual effects outfit Pixomondo supervisor Kevin Blank. When the first prehistoric critter sneaks onto the screen, Terra Nova unspools a wondrous Spielbergian moment as a child befriends a giraffelike, 40-foot-tall herbivore.

All the other dinosaurs are bloodthirsty bastards, though, including the brontosaurus that chases all-terrain vehicles like a panther pursuing gazelles, are vicious. Then there’s the convincingly fearsome, bug-eyed Slashers, which live up to their name by snacking on the limb of Josh’s unlucky pal.

Unlike Spielberg’s other TV sci-fi survivalist drama, Falling Skies, or his iconic Jurassic Park franchise, Terra Nova seems more interested in routine human squabbles. As directed by Alex Graves, the dinosaurs lurk off-camera most of the time, waiting for the opportunity to thrash hapless human prey.

At the end of Terra Nova’s premiere episode, teen Josh sees the moon in all its unpolluted glory and notes, “The sky’s insane. This whole place is insane.” If only it were.

Still, Terra Nova hints at a welcome dose of upcoming weirdness in the form of a mysterious prodigal son and cryptic symbols etched into jungle stones that may reveal a secret explanation for the entire time-travel enterprise.

TV series like this that rely on deep mythology for story payoffs face the risk of getting canceled before they have a chance to reward fans with satisfying closure. For every Lost or Battlestar Galactica triumph, there’s a dozen FlashForward, Dollhouse, or Caprica misfires.

Here’s hoping Terra Nova benefits from the time and imagination necessary to make its human heroes as interesting as its dinosaur stars.

Wired: Promising time-travel mythology peeks out from ravishing jungle locale where the prehistoric wild things are.