Frank Miller doesn’t do things halfway. One of the true comic-book greats, he’s created several of the most extraordinary stories ever to grace the art form. So perhaps it’s fitting that now he’s produced one of the most appalling, offensive and vindictive comics of all time.

Holy Terror, Miller’s long, long, long-awaited statement on 9/11 and counterterrorism, hit comic book stores Wednesday. Longtime Miller watchers have viewed it with apprehension, hoping that his dark views about the source of that national trauma wouldn’t turn the comic into a vulgar, one-dimensional revenge fantasy. They were wrong. It’s even worse than that.

Miller’s Holy Terror is a screed against Islam, completely uninterested in any nuance or empathy toward 1.2 billion people he conflates with a few murderous conspiracy theorists. It’s no accident that it’s being released ten years after 9/11. This comic would be unthinkable during the unity that the U.S. felt after the attack.

Instead, it’s a perfect cultural artifact of this dark period in American life, when the FBI teaches its agents that “mainstream” Islam is indistinguishable from terrorism and a community center near Ground Zero gets labeled a “victory mosque.” Call it the artwork of 9/11 decadence, when all that remains of a horror is a carefully nurtured grievance.

Holy Terror is a screed against Islam, completely uninterested in any nuance or empathy.

Holy Terror, the inaugural offering from Legendary Comics, starts out with the Fixer, an ersatz Batman, enjoying a tryst with an ersatz Catwoman when they’re interrupted by a nail bomb. The culprit: a “humanities major” named Amina, an Islamist version of the psychopathic Rorschach from Watchmen, who sneers that the “haughty” skyline of Empire City is like “sharpened sticks aimed at the eyes of God.”

The Fixer’s response is to go to war — indiscriminately. “We give them what they want, minus the innocent victims,” the Fixer thinks as he opens fire. To bring the point home Miller draws 14 stereotypical Muslim faces around the righteous anti-hero. Naturally, the only way to learn more about the next attack is to torture a surviving terrorist — which Miller illustrates pornographically — even though the Scary Muslim says “pain means nothing to me,” so it’s not like the Fixer is torturing, you know, a human being. 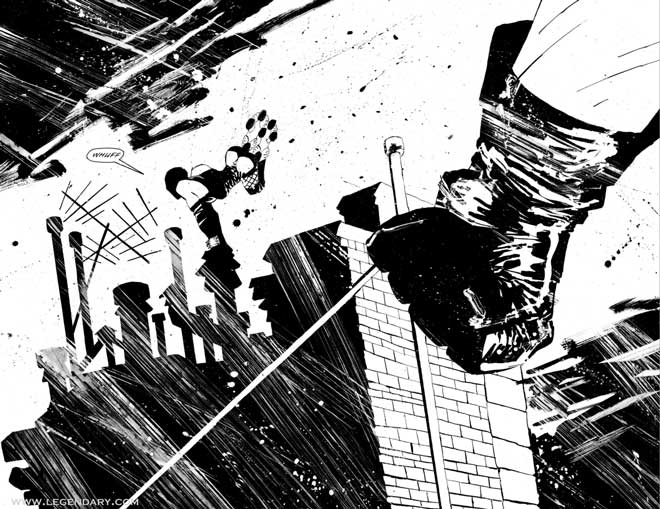 “So Mohammed,” the Fixer says, “Pardon me for guessing your name, but you’ve got to admit the odds are pretty good that it’s Mohammed.” Naturally, the terrorists are amassing an army in a mosque, against whose walls “the night winds blow away seven centuries.” That’s the tenor of the book, though I won’t spoil the ending.

The tragedy is that Miller is no hack. Throughout his 35-year career, he’s been one of comics’ few undisputed geniuses. Check the resume: from Daredevil to Ronin to Sin City, Miller excels at exploring the dark side of humanity without reducing his characters to simplistic killing machines. His Dark Knight Returns was one of the game-changing comics of the 1980s, the greatest Batman story ever told, a book that rivals Watchmen in its ability to prove that comics are literature. As an artist, Miller’s forte is in stark black-and-white color schemes, yet he creates worlds where the morality is a subtle gray.

He is also at the height of his cultural influence. The film adaptations of Sin City and 300 were so successful that Hollywood actually let him direct The Spirit. Christopher Nolan’s rebooted Batman trilogy would be unthinkable if Miller had never created The Dark Knight Returns. Word is that the upcoming Daredevil movie reboot will be based on Miller’s “Born Again” storyline.

That means it’s a mistake to write off Holy Terror as unimportant or a stumble in an otherwise great career. It’s a cultural flag, planted to serve as a “reminder that we’re in the midst of a long war,” Miller told Comic-Con International this year, against an enemy that’s “pernicious, deceptive and merciless and wants nothing less than total destruction.”

If Miller was really interested in delivering a propaganda blow to al-Qaida, he would have made a comic book laughing at its incompetence.

That quote, and Holy Terror itself, ignores practically everything about the actual strategic situation the United States is in. The jihadists of Holy Terror are legion, killing American civilians at will. In reality, al-Qaida is decimated, relentlessly battered by drone strikes, its iconic leader killed by U.S. Navy SEALs, and unable to pull off even relatively unsophisticated plots like packing bombs into printer cartridges and detonating them on cargo planes. Terrorists lack the capacity to do lasting damage to the U.S., and so they rely on American overreaction to do the job for them. Readers of Holy Terror will never know any of that — nor will they know that al-Qaida’s victims are mostly Muslims themselves. If Miller was really interested in delivering a propaganda blow to al-Qaida, he would have made a comic book laughing at its incompetence.

So it’s hard to escape the conclusion that Miller is emotionally unprepared for actually defeating al-Qaida. He’s bought into the myth of a “Long War” for so long that the only measurement he has for victory is that the U.S. keeps aimlessly fighting. Once the Fixer has his mission, he observes, “I am at peace. And at war.”

Oh, and Miller has one other metric for success: “really piss[ing] people off,” as he told Comic-Con. By that he means his fellow Americans, who are at risk of believing that Islam isn’t out to kill their grandmothers. Americans are “naïve,” one of the plotters in Holy Terror cackles.

Miller is hardly the only one to think so. His comic is the latest in a recent line of bigoted statements against Islam masquerading as a truth that liberals are too craven to accept. The same dreck is on display with the group that led the summer 2010 fight against the so-called “Ground Zero Mosque”: Stop Islamization of America, which the Anti-Defamation League has labeled a “conspiratorial” extremist group. One of its ringleaders, the blogger Pamela Geller, is now threatening to sue New York’s Metropolitan Transit Authority for rejecting one of her ads, which calls opponents of Israel “savages.” For Geller’s self-righteous ilk, rejection by the mainstream is proof of their self-evident virtue, a reminder that the rest of the country just can’t handle the reality of the “Muslim threat.” 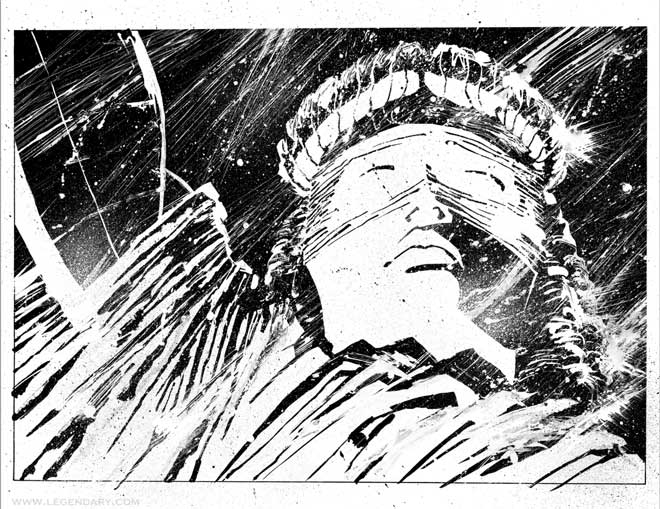 That sentiment has made its way into the halls of the FBI. In January, one of its field offices entertained a lecture on Islamic law from Stephen Coughlin, a former Pentagon consultant on the subject. Coughlin’s typical spiel contends that there’s a “ten-year plan” to make “defamation of Islam a crime” around the world. His PowerPoints blare that “The SILENCE in the mainstream media on this DIRECT ASSAULT is DEAFENING! — not just on speech — but on thought itself!!” The FBI retains a counterterrorism analyst, William Gawthrop, who analogizes Islam to the Death Star and has called al-Qaida “irrelevant” compared to the threat of Islam itself. Gawthrop has taught this material to the FBI’s newly minted counterterrorism agents at Quantico.

It would seem that the near-total defeat of al-Qaida isn’t enough for this cohort, so they enlarge the problem to all of Islam. Through this prism, they play-act a civilizational war, one that’s supposed to give life — and America — meaning beyond the mundane reality of vigilant counterterrorism. It’s more of a fantasy than anything you get on Wednesday at the comic store.

Following 9/11, Miller himself had a sophisticated, complex reaction, intolerant of anyone’s easy pieties.

It’s ironic: In the aftermath of 9/11, even George W. Bush went out of his way to embrace Muslim-American citizens. “The enemy of America is not our many Muslim friends; it is not our many Arab friends,” Bush said. Yet Coughlin, in his master’s thesis, said Bush’s tolerance had “a chilling effect on those tasked to define the enemy’s doctrine by effectively placing a policy bar on the unconstrained analysis of Islamic doctrine as a basis for this threat.”

And following 9/11, Miller himself had a sophisticated, complex reaction, intolerant of anyone’s easy pieties. As David Brothers at Comic Alliance reminds, Miller contributed to a volume called 9-11 Artists Respond by offering a scathing, stark series of captions — “I’m sick of flags. I’m sick of God. I’ve seen the power of faith.” — over a haunting illustration of the World Trade Center wreckage.

But it wasn’t God who knocked down the Towers. It was fanatics who believed themselves to have deciphered His true message. Miller doesn’t realize that by portraying them as true disciples of Islam, he’s giving the murderers what they want most. That’s the real terror of Holy Terror, the real lie, and the real naïveté.

Read 3218 times
Published in News Technologique-Tech News
More in this category: « Hands-On: Living Graffiti Slides Through the City of Sideway First Look: Up Close and Personal With Amazon's Kindle Fire »
back to top