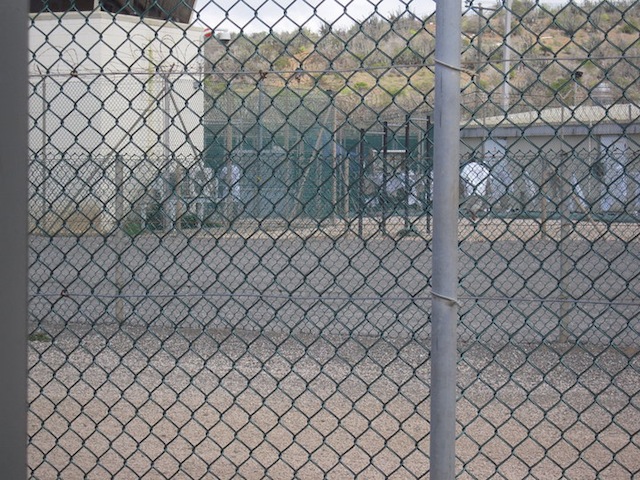 Television’s newest legal drama could be the rawest one ever. It comes later this fall, beamed in from the courtroom near the detention facility at Guantanamo Bay. Only you won’t get to watch it.

Right now, there is only one way to witness a so-called military commission for an accused terrorist: ask the Pentagon to let you travel to Guantanamo Bay, Cuba. Be warned: only journalists and representatives of human-rights groups get approved. And those lucky few civilians admitted to the island have to pay several hundred dollars to hang around a baking-hot military base under constant supervision — vastly stricter than any base in Iraq and Afghanistan.

Oh, and they also have to sign a long, confusing list of rules that allows the military to censor all your footage at Gitmo. And if officers think a reporter has violated any of those rules, the journo can kiss future coverage goodbye.

But that’s starting to change. Somewhat.

The new military commissions chief, Brig. Gen. Mark Martins — who once took Danger Room on a tour of Bagram’s detention center — is letting more sunlight peek into the courtrooms of Guantanamo. Tucked into a fawning Weekly Standard profile is the news that the Pentagon will beam a closed-circuit feed from the commissions room back into an undisclosed venue in the continental United States. There’ll be a 40-second delay to protect classified information.

The first such commission to be beamed into the States will probably belong to Abd al Rahim al-Nashiri, the accused mastermind of the 2000 attack on the U.S.S. Cole. Commission officials filed capital charges against al-Nashiri on Wednesday. No date for the hearing has been set.

But the average citizen probably won’t get to see Nashiri’s commission, or any other Gitmo trial. And since there’s no photography permitted in the courtroom — just the indefatigable sketch artist Janet Hamlin — don’t expect any archived video to show up on the Pentagon’s YouTube channel. (The networks will probably get to shoot video of the closed-circuit, though the details are still undetermined.) Military commissions will remain less transparent than U.S. civilian courts.

It’s also unclear exactly where the closed-circuit feed will be hosted. All Pentagon officials have determined is that it’ll be at a military facility around Washington D.C. But they haven’t decided on which one — except to rule out the Pentagon, since tying up the briefing room for hours and days on end is considered impractical. And the feed will only be hosted in one location, with no additional streaming capability or rebroadcasts. Any journalists, human-rights types or detainee relatives looking to catch the feed will need to book a ticket to Baltimore-Washington, Dulles or Reagan National airports.

Full disclosure: the suggestion for the closed circuit feed came from the Pentagon Press Association, the organization of the Defense press corps, of which I’m a member. (Not that I had anything to do with the suggestion.)

While that might not sound like much, it’s a big help to journalists who want to observe a process that most of the world considers a kangaroo court. Carol Rosenberg, the Miami Herald reporter who has covered Gitmo detentions consistently since their 2002 inception (and my friend), speaks from experience when she writes that reporters at Guantanamo have faced “strict limitations on where they could go and what they could report, and the limitations and expense helped cut the number of news organizations covering events there.” (I speak from rather less experience, but she’s absolutely right.) Enthuses Brookings scholar and blogger Ben Wittes, “it will enable a whole array of different voices to monitor the trials.”

Well, pending Pentagon approval. And even after Gitmo TV gets up and running, journalists will still have no independent way of monitoring the treatment of detainees at Guantanamo, where torture has been documented. Journalists will still have to travel to Guantanamo to see detainee conditions — and then only under a strict military escort; and then they’ll only see the detention centers that the military makes available. (Here’s a photo gallery I put together during one such tour last year.) Like certain detainees themselves, some reality TV will never make it off the island.