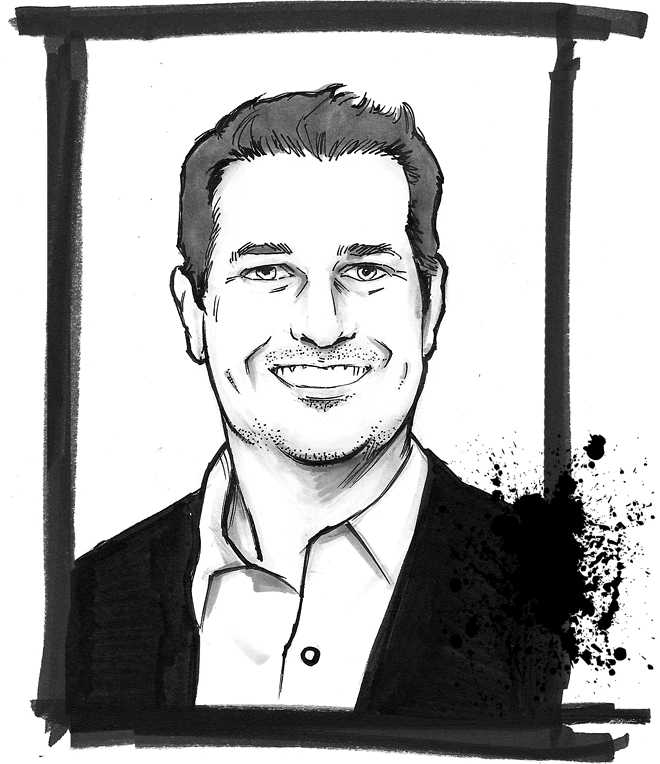 It may not be obvious at first viewing, but Community is a show that’s written and executed with mathematical precision.

In Wired’s feature on executive producer Dan Harmon, the show-runner broke down the algorithm he uses to create the narrative arcs on Community, NBC’s sitcom about students at a Colorado community college. Each story must go through eight steps that Harmon marks around a circle, beginning with a character in a comfort zone and ending with them changed because they left that zone to get something they wanted. It’s a wonderfully geeky system for compiling a television show.

But Harmon’s “embryos” are only the beginning. Once it’s decided what Jeff, Troy, Abed and the gang must do in a given episode, Harmon and his writers pack the script with the pop culture references and jokes the show is known for. And they have to do that without losing their characters or making them contradict previous actions.

Those deviations from the show’s story drive Garrett Donovan nuts. In addition to being another one of the show’s executive producers, he’s also Community’s de facto continuity guru, aiming to make sure nothing seems out of whack. He knows when it’s off, the fans will notice and take to Twitter to point out the mistakes.

“The fans on Twitter are keeping us honest,” Donovan, 42, told Wired.com. “It was put out there recently that this one actor was going to play Pierce’s father and was going to come to visit. Someone tweeted to Dan that we had said in the sixth episode of the first season that Pierce’s father was dead. So that’s a case where the audience is doing this work for us, which is great.”

Twitter can also be used like a focus group for the creators. “Every time a new episode airs, I get on Twitter and search for #Community…. You get a real-time response to a script you worked so hard on,” Donovan said.

For the times when Twitter can’t help, Donovan must rely on his own smarts, Wikipedia and Harmon’s mental pop culture encyclopedia. It’s a tough job, but somebody’s got to do it. Check out Donovan’s TV Fact-Checker bio below.

Community is known for its pop culture references. How do you fact-check funny?

“The internet makes it a lot easier to do. If it’s a really obscure thing, we’ll tell a writer’s assistant to go research it. On Scrubs, we’d always have this debate with medical jargon. The rule of thumb there was: ‘OK, maybe it’s not true, but if it’s a funny enough joke then we’ll forgive it.’ If the number of people in the audience who laugh outweigh the number of people who will be annoyed that it’s incorrect, then we may allow ourselves to do it. If too many people out there are going, ‘That’s not true, it’s just wrong’ then it takes them out of the story and we don’t want that. The funny thing is, Dan knows so much about movies and TV that it rarely comes up where we have to fact-check.”

Even with Dan on board, have you ever made a mistake?

“Honestly, it’s not so much the pop culture references as it is the continuity. The fact of the matter is, with these accuracy checks and research, we do the most research on our own show. We have to make sure what a character said about their lives in Season 1 is also true in Season 3 and we try not to violate that. There are times when we will research our show on Wikipedia. The audience out there is documenting this and compiling it and putting it on the internet. In the old days you would have a show bible and each character would go in the bible and you could look it up, but now it’s quicker to go to the episode list (online). We have to make sure we’re not getting our own show wrong, because that would be embarrassing.”

In the writer’s room, what comes first — the tale or the jokes and pop culture references?

“The pop culture references come into play once we’ve outlined a story. Then we’re on the joke path. A lot of those things are just used as punch lines. I want to treat these characters to be like real people. Like with a show like Mad Men, there’s such attention to detail that the overall experience is better.”

What about the times when the narrative itself is based on a pop culture moment?

“Occasionally, there’s the exception. We were kind of under the gun for one episode last year when we needed a quick short story for Abed. Somebody pitched a joke about, ‘Who really is the boss in the show Who’s the Boss?’ We started talking about it and that gave us three or four beats, which equals a small run for us in an episode. It turned out to be an entire story based on this pop culture reference. There have been times when we’ve fallen so in love with a joke that we might write towards the joke, or start a story because we love it. Oftentimes that leads the wrong way because you’re writing a story that’s not coming from character or an emotional place; it’s coming from just a punch line. Those stories tend to feel more shallow and just land with a thud.”

Do you ever use other movies or TV shows to explain what you want to happen to a character in the writer’s room? Do jokes spring from that?

“Oh, absolutely. That happens all the time. Especially with someone like Dan Harmon who’s seen every movie ever made and watched every TV show. In a lot of ways, he’s like Abed. He’s a walking encyclopedia for that stuff. Have you ever heard the saying, ‘There’s only seven original stories out there’? We’ll talk about characters that need a story, we’ll come up with a premise. Like the My Dinner With Andre one last year. It helps us a lot because we’re all children of TV. When we were breaking that story it was, ‘OK, Abed wants to bond with Jeff.’ But to make it clear in the room we made it a My Dinner With Andre thing. Suddenly everyone knows what you’re talking about.”

Has that ever lead to re-conceptualizing an episode or storyline?

“There have been times when we’ll actually rent movies and then we’ll re-approach the story after everyone has seen it. With the ‘A Fistful of Paintballs’ episode last year, we spent half a day watching Fistful of Dollars. We’ll go so far as to mimic the style of something and do an homage to it. We also did a Mean Girls story last year, and then we just added a twist. We added the element of RoboCop, so that was like a fusion of the two. We’re not trying to do a direct rip-off — we’re trying to see it through the lens of our characters.”

Do you ever nix jokes because they’re too obscure?

“In the writer’s room we have a term. Someone will pitch a joke and we’ll say, ‘Oh that’s a five-percenter’ — meaning 5 percent of the audience is going to know what you’re talking about. But sometimes everyone loves that joke so much that we’ll allow ourselves to put it in the show. And hopefully that sets our show apart. I think they may have more of those on 30 Rock, but as a comedy writer that’s why I love watching that show. But you have to be aware. What Dan always uses as a barometer is: ‘Will my mom get this?’ Normally when we do the low-percenter jokes, they’re given to Abed. He’s a quasi-autistic character who sees the world through pop culture, so he more than anyone is going to make the obscure reference.”

‘We’re not trying to do a direct rip-off, we’re trying to see it through the lens of our characters.’

Do you have any particular favorite pop culture gags from the first two seasons?

“Personally, I like what we did with Cougar Town. It was really betting the farm on this reference. We basically did a whole act where Abed talks about his time on Cougar Town. People have seen [that show], but not our entire audience. What made that work, and was kind of our insurance policy, was that even if you’d never seen Cougar Town, you could get that it was a TV show and this is what it meant to him. I also like the Apollo 13, space bus, that whole episode. Also, the Aimee Mann song in our second episode was used in Magnolia. I don’t know if you have to know that movie to get it, but it was the absurd version of that moment in Magnolia where the characters are having this culminating experience. I thought that worked well.”

Can you tease any of the Easter eggs that might be hidden in Season 3 of Community?

“What we’re going to do is Troy and Abed are going to move in together and with those two they’re like two kids. They often re-enact their shows. So it’ll be like a fun play land, that apartment. I’m going to air on the side of not divulging, but I will say that this season the pop culture references are going to veer into British television. As if it wasn’t obscure enough the things we were taking from American TV, we’re taking it to the next level.”