An artificial uterus, designed to give live birth to sharks, rests in the lab of the Port Stephens Fisheries Institute, in the New South Wales. It’s an atypical maternity ward.

The uterus, a series of tanks, tubes and fluid-exchange systems, is a proof-of-concept for now. But one day it could boost the dwindling numbers of the grey nurse shark.

Nick Otway, a fisheries biologist, was charged with devising a plan to breed this threatened shark with a bizarre reproductive cycle. In a paper published in Zoo Biology, Sept. 8, he and his colleague Megan Ellis, report they have done just that.

Grey nurse sharks, known as sand tiger sharks in the United States, are regionally endangered off the east coast of Australia, and listed as vulnerable on the IUCN Red List. Though not intentionally targeted by commercial and recreational fishing,  many are caught and die by accident, said Otway. And the death of even one is a huge loss, since babies are so hard to come by. 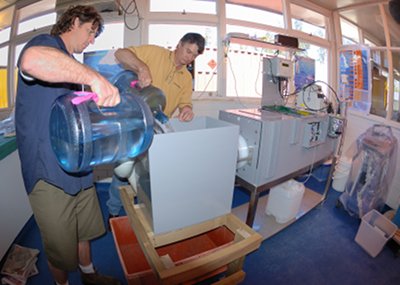 After mating, a female produces as many as 40 fertilized embryos, separated between two separate wombs. The embryos take nearly a year to fully develop, but they begin hunting long before that. After about two months, their own yolk sacs go dry. Hungry, they start eating their brothers and sisters. After the rampant in utero cannibalization, only one shark — the biggest and strongest — is left in each womb.

At birth they’re three feet long and experienced hunters, with a good chance of survival. But the tiny brood size, nearly  year-long gestation period, and relatively restricted maternal capacity — after giving birth, mothers must wait a year to reproduce again — limit the number of young sharks.

“I was essentially charged with coming up with a breeding program and it is a tall task,” said Otway. “The only way to do it is to bypass the cannibalistic phase.”

Otway and his research partner for the work, Megan Ellis, decided to use wobbegong sharks (Orectolobus ornatus) as their lab animal. Wobbegongs have a similar gestation period to grey nurse sharks, but are smaller, less threatened and easier to keep in captivity.

Initially Otway and Ellis tried to keep embryos, one month away from birth, alive in small aquaria. But the wobbegongs died within a week. The artificial uterus they developed is essentially complex aquarium, with air vents, bacterial filters, peristaltic pumps, observation ports, water exchange systems and a host of monitoring sensors. With this set up, Otway and Ellis brought six embryos to term. The sharks, taken from one euthanized female captured by divers, spent the final 18 days before birth in the artificial uterus.

When born, the pups were average size. They all survived to be released in the wild after about three months, or given to Ocean World Manly or Sydney Aquarium.

If this research were to continue, a logical next step would be to rear younger wobbegong embryos. Prior to the late-term stage, the wobbegongs, like the nurse sharks, rely on a complex and delicately balanced uterine fluid. Creating this artificially would be a difficult but feasible challenge, Otway said, but he’s not sure it’s the best idea.

According to Otway, studies of grey nurse sharks in the wild are a better conservation plan than artificial birthing setups. If fisheries managers know the shark’s migration patterns and feeding habits, they can mandate fishing restrictions in certain areas at certain times to protect the sharks.

“We proved, I think, that this concept could work. But it would be incredibly expensive, a few million dollars at least, to fully develop this for grey nurse sharks,” Otway said. “I’m not sure the cost would be worth the benefit.”

The artificial uterus will remain as a backup plan, however, if conservation becomes dire.