How the Kindle Fire Could Make 7-Inch Tablets Huge 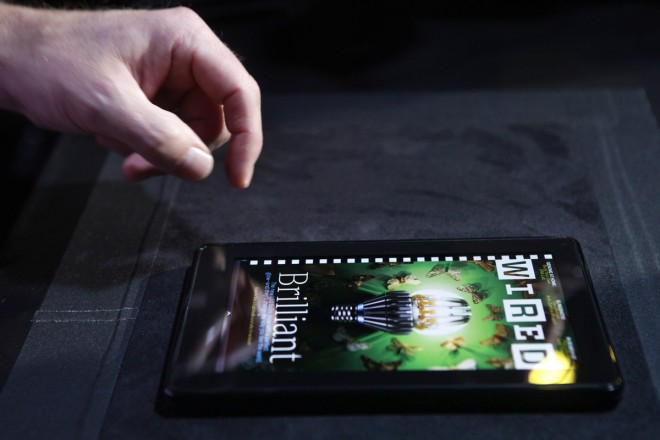 Steve Jobs made it clear what he thought of 7-inch tablets in October 2010. They’re “too small,” and as good as “dead on arrival.” But the announcement of and anticipation surrounding Amazon’s Kindle Fire tablet may soon have Jobs eating his words.

If you’ve been living under a rock and haven’t heard the news, Amazon debuted its $200 7-inch tablet, the Kindle Fire, this week. Make no mistake: It’s no iPad. There’s no front-facing or rear-facing camera, and it’s only got 8 GB of storage.

But it’s not meant to be an iPad. It’s a completely different kind of tablet, designed for the pure consumer. That is, it’s designed for consumptive behavior: reading, listening to music, watching video content. The lack of local storage isn’t an issue, either; it’s meant to take advantage of the cloud with services like Amazon’s $80 yearly Prime service, as well as Amazon Cloud Drive. And the smaller form factor makes it extra portable, easy to whip out on the bus or the subway (much like a Kindle).

“With a 7-inch device, you can easily take your Kindle Fire with you and hold it in one hand for gaming and movie watching,” Amazon representative Kinley Campbell said via e-mail.

UX design consultant Greg Nudelman thinks that 7-inch tablets could become just as popular as larger 9.7 and 10.1-inch tablets, “but the types of applications and the context and length of use between might be very different.”

The iPad, although portable, is more difficult to manage with a single hand due to its larger size. And while it is certainly geared towards consumptive behavior, the iPad also strives to break the mobile-PC barrier by becoming a tool for creation, with programs like iMovie for iPad and GarageBand for iPad allowing users to produce content rather than just passively take it in. Whether it actually accomplishes that or not is subjective (some scoff at GarageBand’s limited capabilities), but it’s possible, and likely that more apps of this nature are in the pipeline (third-party produced or otherwise).

Amazon’s decision to debut a smaller-sized tablet was likely influenced by the players in the current tablet market. The 7-inch space has the least resistance, DisplaySearch’s Richard Shim says. Its direct competition is more likely to be the Barnes & Noble Nook Color, which also runs Android and touts a similar form factor, than Apple’s iPad.

That’s exactly what fueled Velocity, makers of the 7-inch Android-running Cruz tablet, to choose that size. “We wanted to avoid the head-to-head comparisons to the 10-inch iPad — ours is a very different product that goes after a different target customer,” marketing manager Josh Covington said.

The smaller size also allowed Amazon to more easily make a splash with a lower price point, something other 7-inch tablet manufacturers are going to have to mimic to stay competitive. Take HTC, which just dropped the price of its 7-inch Flyer tablet from an iPad-range $499 to a more affordable $299.

Samsung also jumped in on the hype, introducing its Galaxy Tab 7.0 Plus on Friday. If Samsung can manage a similar price, the Kindle Fire could have another legitimate competitor.

And just in case it crosses your mind, a 7-inch tablet would not be something Apple would likely ever debut. Apple has been tremendously successful with its 9.7-inch iPad, which flew off shelves shortly after its debut and has continued solid sales since. Unless that changes for some reason, there isn’t a need for Apple to break out a smaller iPad, economically speaking.

It’s also not in Apple’s DNA. Since Steve Jobs jumped back on board with Apple in the late ’90s, Apple’s success has hinged on innovation, rather than riding on the heels of successful consumer reaction in markets it doesn’t have a presence in. Take the netbook market for example: Rather than releasing a netbook, Apple introduced the MacBook Air, and later of course, the iPad.

Part of what’s hindered the success of the 7-inch tablet, until now, is that they are perceived to be more like an over-sized mobile phone than a tablet, “and that appears to be the Achilles’ Heel of the mini-tablets,” Nudelman says.

But the genius of the Kindle Fire is that it’s more closely identified with Amazon’s popular e-reader line than with smartphones, so it has a clearly defined place within the user’s mind. And now that Amazon has made that distinction clear, other 7-inch tablet makers can at least attempt to capitalize on that extra portable, media-consumption angle, rather than marketing them against the iPad.

The Kindle Fire’s separation from both larger iPad-sized tablets and large-screened smartphones, both in size and in function, will help secure a solid niche for other 7-inch tablets to follow.