Want proof that you don’t need to draw muscled paragons like Jim Lee to make it as a comics artist? Check out Kate Beaton’s smart-ass strips skewering Wolverine, Wonder Woman and whoever else she deems worthy. 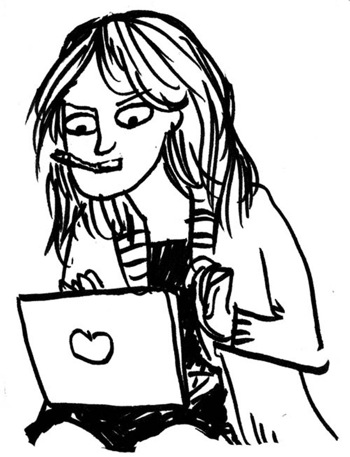 Self portrait of the artist. Kate Beaton, hard at work.

The smart, sharp Beaton casts a much wider cultural dragnet in her otherwise unassuming art, one which snatches up literary, historical and scientific icons without mercy. Even the notoriously warring brainiacs Nikola Tesla and Thomas Edison aren’t spared her satirical scalpel.

Intrepid indie comics publisher Drawn and Quarterly compiled 160 pages of Beaton’s fearless snark in the hardcover Hark! A Vagrant, released Tuesday. You can check out more at Beaton’s official site, The New Yorker and even Pendleton Ward’s acid fantasy Adventure Time, which adopted her Fat Pony for last year’s demented episode, “The Eyes.”

As crude as they can be in their illustration and humor — as some readers might complain after scanning her rip on the Kennedy clan in the gallery above — Beaton’s determined absurdities are, ironically enough, much-needed cerebral antidotes to the common-denominator comedy and drama now dominating mature comics and animation.

Shows like the excellently subversive Adventure Time would have been staples on Adult Swim years ago, when Harvey Birdman: Attorney at Law ruled the roost. Now we’re stuck with lightweight stabs like Squidbillies (at least until The Boondocks returns).

And the less said about comics, the better. DC Comics’ heavily hyped The New 52 reboots have so far unearthed rare pleasures, but too many unrepentantly misogynist comics like the rancid Red Hood and the Outlaws have made it way too easy for 7-year-old girls to shame the publisher online.

We’ll take Beaton’s bored Wonder Woman, who is more way compelling than the superhero was in her deservedly aborted NBC pilot, and her other satirical stabs any day, thanks. Will you? Let us know your takes on Beaton’s roasts in the comments section below.