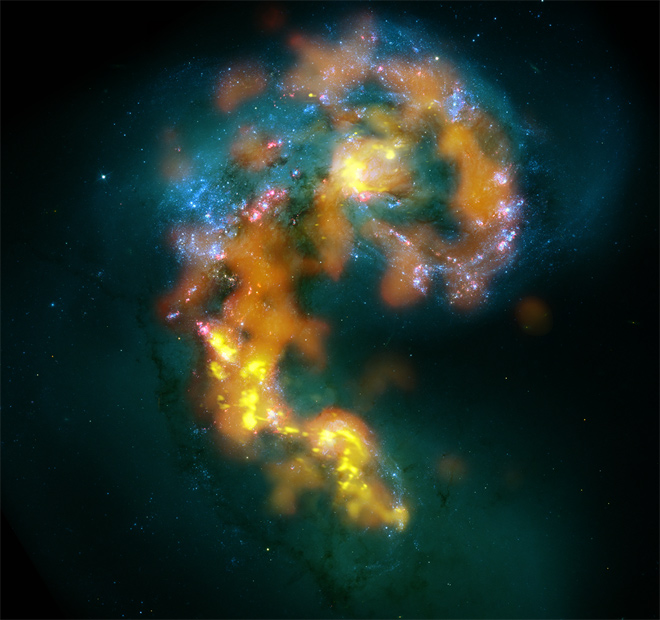 A radio telescope array being built in the highest, driest desert in the world has photographed two colliding galaxies for its first public test shots.

The new images reveal a flurry of star formation within thick clouds of gas and dust at the Antennae Galaxies’ impact zone, 45 million light-years away. Older star-forming regions appear as a faint orange in the image while the youngest — some 3 to 4 million years old — glow bright yellow.

“In the past we couldn’t study them because they were behind the dust. The thing that’s been missing is the youngest stars, which are the most interesting,” said astronomer Brad Whitmore of the Space Telescope Science Institute in a webcast. “This is a beautiful example where we’ll be able to see the full life histories of star clusters.”

Gas and dust absorb the light of stars and then re-emit the energy in different wavelengths of light. Yet like black-out curtains, the thickest molecular dust clouds are too murky for almost any wavelength of light to escape.

Radio wavelengths are an exception. Similar to how curtains or even thick walls don’t absorb all of a local radio station’s broadcast, radio starlight can weave through dense molecular clouds, across the universe and reach human-built telescopes. 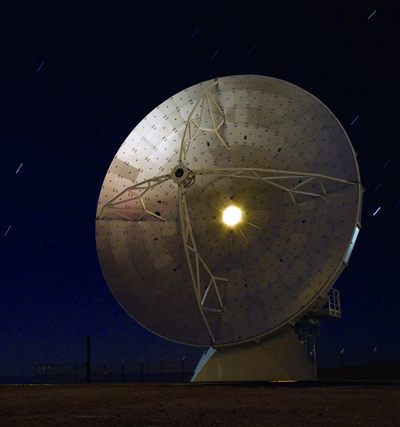 A 100-ton ALMA radio telescope antenna. Working together, a spread-out array of antennas can peer farther and with more sensitivity than a single antenna alone.

Frequencies of radio light that ALMA can detect don’t merely indicate the presence of hot young stars. The light also carries with it rich chemical information about the hearts of star-forming regions.

“For the last 25 years, we have really only relied on being able to see carbon monoxide or hydrogen cyanide,” said astronomer Kartik Sheth of the National Radio Astronomy Observatory in the webcast. “For the first time, we can see the entire chemical spectrum.”

To capture radio wavelengths of light, an international team of scientists and engineers have installed 22 of 66 planned radio antennas, each of which weighs nearly 100 tons and stretches 40 feet in diameter. The last of the $1 billion array’s antennas should be in place by 2013.

By then ALMA should have a resolution able to extract details between eight and 10 times better than any radio telescope on Earth, enough perhaps to peer into planet formation within the Milky Way galaxy.

And because ALMA’s collection area will be 70 percent larger than other radio arrays, astronomers also expect a sensitivity up to 100 times better. Observers competing for limited time on the array can capture their images more quickly.

“ALMA’s test views of the Antennae show us star-forming regions on a level of detail that no other telescope on Earth or in space has attained,” said astronomer Mark McKinnon, a project manager of the telescope array, in a press release. “This capability can only get much better as ALMA nears completion.” 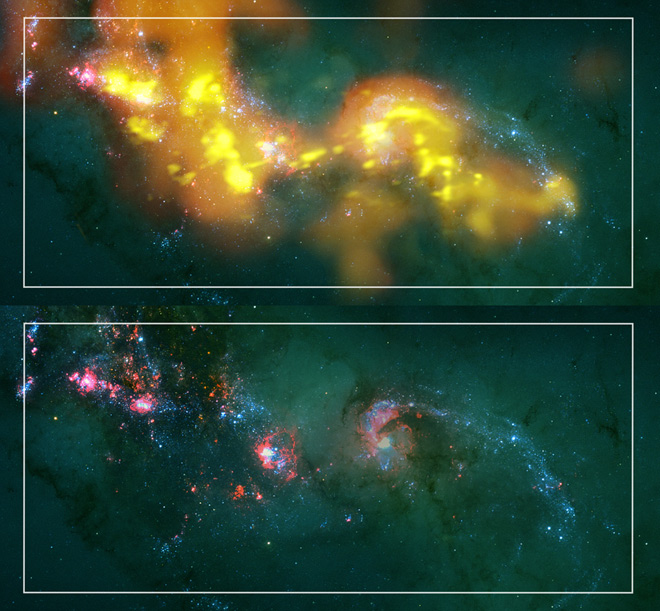 Read 4700 times
Published in News Technologique-Tech News
More in this category: « Arctic Ozone Hole Enlarged by Severe Cold Spell Tehran Mullahs to Putin: See You in Court! »
back to top