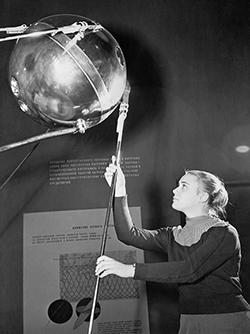 1957: The Space Age dawns a little sooner than expected with the successful launch of Sputnik 1 by the Soviet Union. It’s a pivotal moment, the kind of event that — more than five decades later — still has people asking, “Do you remember where you were when …?”

But Sputnik may not have been quite the world-beater it seemed at the time. In interviews leading up to the 50th anniversary of the launch, Boris Chertok, one of the founders of the Soviet space program, admitted that Sputnik was something of a lash-up, a hastily put-together gamble using a spare rocket and a satellite assembled from what was on hand.

Nevertheless, as it had been with the sudden emergence of the USSR as a nuclear power eight years earlier, the American public was caught off guard by Sputnik and frightened by the implications of a successful Soviet rocket launch. If the Soviets could put a basketball-sized artificial satellite into orbit, they could certainly put a nuclear-tipped missile into a target in the United States.

American unease was only heightened when Sputnik 1 was followed a month later by the successful launching of Sputnik 2, which carried the dog Laika, the first living passenger, into space. (American headline writers dubbed the satellite, “Muttnik.”)

With Sputnik 1’s successful deployment, the political, military and technological relationship between the Soviet Union and United States changed dramatically. The Americans immediately abandoned their Vanguard satellite project, because its intended payload was smaller than Sputnik’s, and started afresh with the Explorer satellite.

Not only did Sputnik herald the beginning of the Space Age, it also constituted the opening salvo in the U.S.-Soviet space race. Within four months, the United States had placed Explorer 1 into orbit. And NASA was established in 1958 as a direct result of Sputnik’s success.

Since Sputnik, an entire generation has come of age that can’t remember when space flight was only the province of dreamers and science-fiction authors.

Photo: A Soviet engineer displays a replica of Sputnik at a 1957 Moscow exhibition. (Bettmann/Corbis)