Why Do Some People Learn Faster? 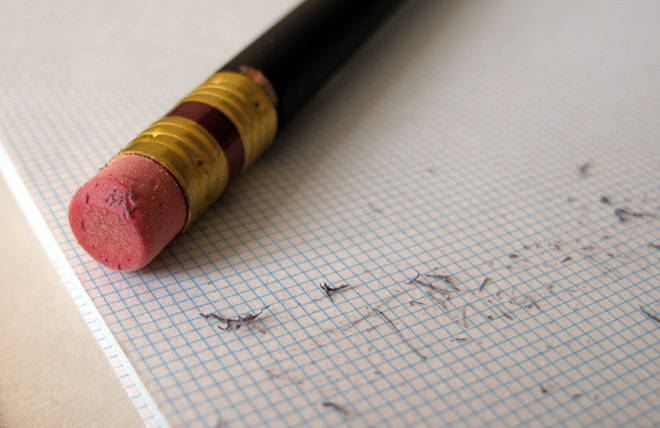 The physicist Niels Bohr once defined an expert as “a person who has made all the mistakes that can be made in a very narrow field.” Bohr’s quip summarizes one of the essential lessons of learning, which is that people learn how to get it right by getting it wrong again and again. Education isn’t magic. Education is the wisdom wrung from failure.

A new study, forthcoming in Psychological Science, and led by Jason Moser at Michigan State University, expands on this important concept. The question at the heart of the paper is simple: Why are some people so much more effective at learning from their mistakes? After all, everybody screws up. The important part is what happens next. Do we ignore the mistake, brushing it aside for the sake of our self-confidence? Or do we investigate the error, seeking to learn from the snafu?

The Moser experiment is premised on the fact that there are two distinct reactions to mistakes, both of which can be reliably detected using electroenchephalography, or EEG. The first reaction is called error-related negativity (ERN). It appears about 50 milliseconds after a screw-up and is believed to originate in the anterior cingulate cortex, a chunk of tissue that helps monitor behavior, anticipate rewards and regulate attention. This neural reaction is mostly involuntary, the inevitable response to any screw-up.

The second signal, which is known as error positivity (Pe), arrives anywhere between 100-500 milliseconds after the mistake and is associated with awareness. It occurs when we pay attention to the error, dwelling on the disappointing result. In recent years, numerous studies have shown that subjects learn more effectively when their brains demonstrate two properties: 1) a larger ERN signal, suggesting a bigger initial response to the mistake and 2) a more consistent Pe signal, which means that they are probably paying attention to the error, and thus trying to learn from it.

In this new paper, Moser et. al extends this research by looking at how beliefs about learning shape these mostly involuntary error related signals in the brain, both of which appear in less than half a second. More specifically, the scientists applied a dichotomy first proposed by Carol Dweck, a psychologist at Stanford. In her influential research, Dweck distinguishes between people with a fixed mindset – they tend to agree with statements such as “You have a certain amount of intelligence and cannot do much to change it” – and those with a growth mindset, who believe that we can get better at almost anything, provided we invest the necessary time and energy. While people with a fixed mindset see mistakes as a dismal failure – a sign that we aren’t talented enough for the task in question – those with a growth mindset see mistakes as an essential precursor of knowledge, the engine of education.

The experiment began with a flanker task, a tedious assignment in which subjects are supposed to identify the middle letter of a five-letter series, such as “MMMMM” or “NNMNN.” Sometimes the middle letter is the same as the other four, and sometimes it’s different. This simple change induces frequent mistakes, as the boring task encourages people to zone out. Once they make a mistake, of course, they immediately regret it. There is no excuse for misidentifying a letter.

While performing the flanker task, subjects wore an EEG cap, a monitoring device filled with greased electrodes that records electrical activity in the brain. (Unlike fMRI, EEG gives researchers excellent temporal resolution, allowing them to precisely measure a sequence of neural events. Unfortunately, this comes at the expense of spatial resolution, making it difficult to know where in the brain the signals are coming from.)

It turned out that those subjects with a growth mindset were significantly better at learning from their mistakes. As a result, they showed a spike in accuracy immediately following an error. Most interesting, though, was the EEG data, which demonstrated that those with a growth mindset generated a much larger Pe signal, indicating increased attention to their mistakes. (While those with an extremely fixed mindset generated a Pe amplitude around five, those with a growth mindset were closer to fifteen.) What’s more, this increased Pe signal was nicely correlated with improvement after error, implying that the extra awareness was paying dividends in performance. Because the subjects were thinking about what they got wrong, they learned how to get it right.

In her own research, Dweck has shown that these mindsets have important practical implications. Her most famous study, conducted in twelve different New York City schools along with Claudia Mueller, involved giving more than four hundred fifth graders a relatively easy test consisting of nonverbal puzzles. After the children finished the test, the researchers told the students their score, and provided them with a single line of praise. Half of the kids were praised for their intelligence. “You must be smart at this,” the researcher said. The other students were praised for their effort: “You must have worked really hard.”

The students were then allowed to choose between two different subsequent tests. The first choice was described as a more difficult set of puzzles, but the kids were told that they’d learn a lot from attempting it. The other option was an easy test, similar to the test they’d just taken.

When Dweck was designing the experiment, she expected the different forms of praise to have a rather modest effect. After all, it was just one sentence. But it soon became clear that the type of compliment given to the fifth graders dramatically affected their choice of tests. When kids were praised for their effort, nearly 90 percent chose the harder set of puzzles. However, when kids were praised for their intelligence, most of them went for the easier test. What explains this difference? According to Dweck, praising kids for intelligence encourages them to “look” smart, which means that they shouldn’t risk making a mistake.

Dweck’s next set of experiments showed how this fear of failure can actually inhibit learning. She gave the same fifth graders yet another test. This test was designed to be extremely difficult – it was originally written for eighth graders – but Dweck wanted to see how the kids would respond to the challenge. The students who were initially praised for their effort worked hard at figuring out the puzzles. Kids praised for their smarts, on the other hand, were easily discouraged. Their inevitable mistakes were seen as a sign of failure: Perhaps they really weren’t so smart. After taking this difficult test, the two groups of students were then given the option of looking either at the exams of kids who did worse or those who did better. Students praised for their intelligence almost always chose to bolster their self-esteem by comparing themselves with students who had performed worse on the test. In contrast, kids praised for their hard work were more interested in the higher-scoring exams. They wanted to understand their mistakes, to learn from their errors, to figure out how to do better.

The final round of tests was the same difficulty level as the initial test. Nevertheless, students who were praised for their effort exhibited significant improvement, raising their average score by 30 percent. Because these kids were willing to challenge themselves, even if it meant failing at first, they ended up performing at a much higher level. This result was even more impressive when compared to students randomly assigned to the smart group, who saw their scores drop by nearly 20 percent. The experience of failure had been so discouraging for the “smart” kids that they actually regressed.

The problem with praising kids for their innate intelligence – the “smart” compliment – is that it misrepresents the psychological reality of education. It encourages kids to avoid the most useful kind of learning activities, which is when we learn from our mistakes. Because unless we experience the unpleasant symptoms of being wrong – that surge of Pe activity a few hundred milliseconds after the error, directing our attention to the very thing we’d like to ignore – the mind will never revise its models. We’ll keep on making the same mistakes, forsaking self-improvement for the sake of self-confidence. Samuel Beckett had the right attitude: “Ever tried. Ever failed. No matter. Try Again. Fail again. Fail better.”