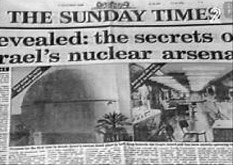 1986: The existence of Israel’s secret nuclear weapons program is revealed by a former nuclear-plant technician, whose story is published by The Sunday Times of London.

Israel has never acknowledged possessing nuclear weapons, although most defense experts believe it has been developing nuclear warheads since the 1960s at its Dimona Nuclear Research Center in the Negev Desert. Official Israeli policy is to be deliberately vague on the subject.

There was nothing vague about what Mordechai Vanunu told the Times, however. The former army sergeant became critical of Israeli policies and left the country after being laid off as a technician at the Negev facility. While living in Australia he met a Times reporter and told him, in detail, about what was going on out in the desert.

Vanunu — who changed his name to John Crossman and converted to Christianity after leaving Israel — accompanied the reporter to London and gave the paper around 60 photographs he had taken secretly while working at Negev. The photographs showed, among other things, the plutonium spheres used to trigger nuclear warheads.

After thoroughly fact-checking Vanunu’s account, the Times broke the story on Oct. 5.

Israel, tipped that the Times had the goods, abducted Vanunu in Rome (after luring him there from London, so as not to incur the wrath of Prime Minister Margaret Thatcher by nabbing him on British soil) five days before the newspaper published the story. He was drugged by Mossad agents and shipped back to Israel on a freighter.

A secret court convicted Vanunu on charges of treason and espionage and sentenced him to 18 years. He was released from prison, where he’d spent up to 10 years in solitary confinement, on April 21, 2004. Vanunu remains a thorn in Israel’s side, continuing to attack the nuclear program as well as Israel’s treatment of its Arab minority.

He has not been allowed to leave Israel, where his freedom of speech is restricted. He served three months in prison in 2010 for violating the terms of his earlier release.