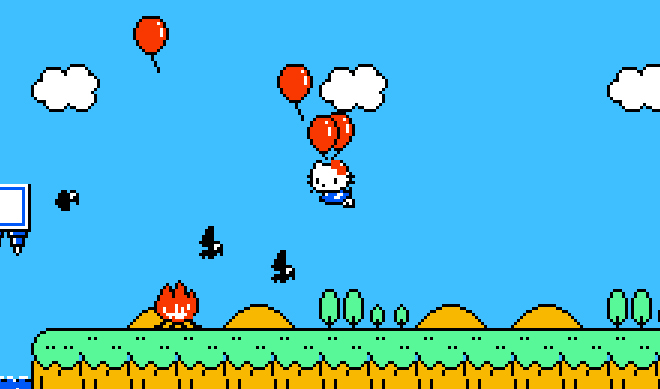 Think you’ve played all the games Nintendo made for the NES? Think again. Think of mouthless cats.

One of the Famicom games I made it a point to pick up on my recent trip to Tokyo Game Show was Hello Kitty World. To look at the box, you’d assume it was just another crappy licensed kids game, the sort of filler with which the 8-bit system’s library is overrun. But no! In fact, it’s an NES version of Balloon Kid, a black-and-white Game Boy game that was not released in Japan.

You may know Balloon Kid as the sequel to Balloon Fight, the cult classic Nintendo arcade game in which you attempt to float around and pop the balloons of your opponents before they pop yours. The NES version got an exclusive mode called “Balloon Trip,” in which you floated along trying to avoid obstacles. That’s the idea that Balloon Kid expanded on, turning a simple mini-game into a more complex side-scrolling adventure.

Hello Kitty World is thus a direct follow-up to Balloon Fight, which should already have fans of the game wanting to play it. The soundtrack is taken straight from Balloon Kid, a bunch of fun tunes composed by Nintendo’s quirky music man Hip Tanaka (Dr. Mario, Super Mario Land). The gameplay is quite good: Things start out easy, and it’s not hard to navigate Kitty-chan through the automatically scrolling phalanx of enemies.

If one of them pops your balloons, you’ll fall to the ground where you can press the Down button rapidly to inflate one or two more balloons. Some enemies will just kill you, though, and falling into the water always means death. Things get pretty tricky as the game goes on, and there’s even a couple of really interesting boss fights: You have to press B to let your balloons go, dive-bombing the boss on the top of the head.

Why does this game usually fly under the radar? Nintendo’s name was nowhere on it. It was published by Character Soft, the videogame imprint of Sanrio. But on the back of the box, it says it was designed by “Mario Co., Ltd.” A forum thread at Lost Levels tells us that Mario Co. was a joint venture between Nintendo and the advertising company Dentsu, with Nintendo owning 51% of the company.

So if you’re a Balloon Fight fan, you don’t have everything unless you’ve got the adorable Hello Kitty on your shelf.

Read 3764 times
Published in News Technologique-Tech News
More in this category: « The Plan to Bring an Asteroid to Earth The iPhone 4S' Talking Assistant Is a Military Veteran »
back to top