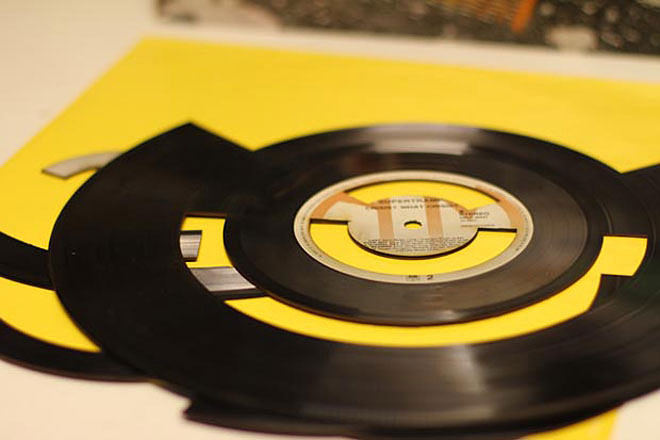 Artist and designer Ishac Bertran puts LPs under the knife for a novel way to create samples.

Designer Ishac Bertran has developed an analog music-sampling technique by physically cutting and pasting pieces of vinyl together to create new tracks.

The artist and designer was inspired to experiment with the technique by analog processes such as making mixtapes and cut-and-paste video editing. “Technology and digital processes have overtaken these,” Bertran told Wired.co.uk. “This makes them more accessible, but the tangibility aspect is lost in most cases.”

One day he saw a broken vinyl record and thought that “it still contained music and it wasn’t much different from having a bunch of samples in a folder on your computer if you are able to put the pieces together under a stylus.”

A passionate amateur DJ, Bertran first of all bought a collection of secondhand vinyl records from a range of artists including Supertramp, Wagner, Paul Anka, Lil Jon and a few tests records.

Once back in his studio, he tested a few different techniques for cutting the records to remove sections, which could then be replaced with pieces from other records. He first tried a hot wire cutter, taking a while to find a temperature that would cut the vinyl without deforming it. The aim was to remove a small section of the vinyl, flip it over, and replace it so that a sample from a song on the B side would play on the A side. He found that it was difficult to get a good fit once the section was reversed, and had to file it down. The fact that the hot wire cutter melted the vinyl meant that it left the edges uneven, which then caused the stylus to jump when the record played.

Bertran then tested using a blade to cut into the vinyl. This worked a little better, but still required some filing, which in turn created a gap, which caused the stylus to jump.

The final technique he tried was using a laser cutter, first of all excising small sections of the vinyl and flipping them, then cutting out larger sections and replacing them with exactly the same size section from another record. The sections were fastened into place with sticky tape.

According to Bertran, “The main challenge was to avoid material loss and keep the grooves as intact as possible in order to minimize the stress on the stylus.”

Once he’d perfected the technique, he honed it, mixing in samples from as many as four different records.

“Because of the nature of the vinyl (the revolutions normally don’t match bitrates) and having to cut sectors instead of linear pieces of audio, results will never be as in a tape or using a sampler. For that reason I expected it to sound really chaotic, as it is. Still I was surprised how good some random samples could sound, especially because of the new beat the groove introduces to the tune.”

If you want to hear what the resulting records sound like, check out the video documenting the process below. View Wired UK’s gallery for more pictures of Bertran’s work.