Luckily, the FX Network show, which premieres Wednesday, freshens up the familiar scare tactics by presenting three-dimensional, ticked-off characters that have a lot more than ghosts to worry about as they settle into a mansion brimming with bad vibes.

Following a creepy prologue set in 1978, when dorky red-haired twins get attacked in a dark basement by a bald dwarf, the series zeroes in on the misadventures of an unhappy family that tries for a fresh start by moving into a haunted house. It’s a tried-and-true setup used in dozens of horror films, including the recent Don’t Be Afraid of the Dark.

Then things get weird. 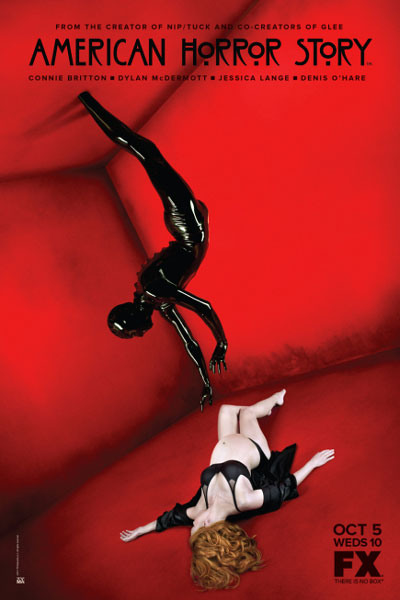 Sexed-up psychiatrist Ben Harmon (played by Dylan McDermott) insists on buying the 1920s-vintage Los Angeles home even though he knows previous owners died in a murder-suicide bloodbath. He promptly begins hallucinating about middle-aged maid Moira, who appears to him as a 20-year-old vixen (Alexandra Breckenridge of True Blood).

Ben’s teen daughter, Violet, never met a razor blade she didn’t like, while his depressed wife, Vivien (portrayed with utter conviction by Emmy-nominated Connie Britton), gets thrown for a loop when neighborhood soothsayer Adelaide (Jamie Brewer) pops up unannounced in her bedroom and announces, “You’re gonna die in here.”

Equally unsettling is Adelaide’s snooty mother, Constance, played to Southern Gothic perfection by Jessica Lange, who dismisses her own daughter as “the mongoloid.”

On the job, Ben the therapist works with Tate (Evan Peters), a wicked high-school student harboring ugly fantasies about massacring his classmates. “The world is a filthy place,” Tate says. OK then!

Deepening the show’s collective psychosis, American Horror Story explores 90 years of twisted family history over the course of its 13-episode debut season. (To help fill in the gaps, the You’re Going to Die in There website offers backstories about the Harmon house’s dark past.)

Teen-rage flicks like Carrie and Heathers also get a tip of the hat, thanks to American Horror Story’s alienated-teen subplots, while jittery jump-cuts popularized by the Saw torture-porn franchise contribute to a sense of relentless anxiety.

Moving beyond those influences, Ryan, co-writer Brad Falchuk and director of photography Christopher Baffa have artfully jacked up the stakes with intriguing antiheroes and their spooky, kooky neighbors to create a nasty, obscenity-laced mythology unlike anything else on television now.

TIRED They swear because it’s cable and they can! The “S” word gets overused.