Xfinity, FiOS and More TV Headed to Xbox 360 This Year 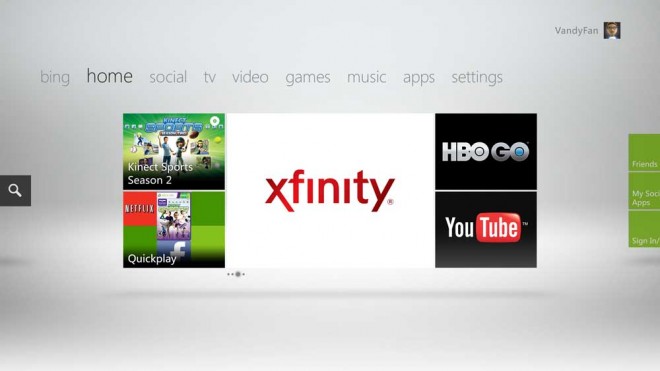 A new dashboard update for Xbox 360 will bring a full slate of new features, including cable TV, to the Microsoft gaming system this year.
Image courtesy Microsoft

Comcast Xfinity, Verizon FiOS, HBO and many more television services are on their way to Xbox 360 this holiday season, Microsoft said on Wednesday.

In all, nearly 40 different providers will bring their services to the game console en masse later this year. Microsoft will also take the occasion to roll out its new dashboard update (pictured above), which will feature Bing-powered searches that should be able to rapidly find anything across Xbox 360’s entire sprawling library of content.

Unfortunately, those of you (like me) hoping to use your Xbox 360 as a replacement for your awful Comcast DVR will have to wait a little while longer, or possibly forever: What’s coming to the system this year is Xfinity On Demand, not live TV.

“Some” channels are coming via Verizon FiOS, but it’s cable channels like MTV and Comedy Central, not network broadcasts.